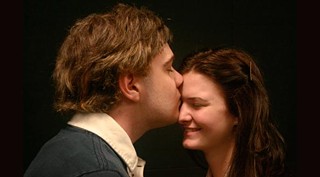 First things first: Gilda Radner and Alan Zweibel were never an “item.” He was a writer for Saturday Night Live, she was one of the show’s breakout comic stars during its initial flush of success in the late 1970s.

They were best pals, running buddies and confidantes. Each was married to someone else. That’s why the subtitle of Zweibel’s memoir play, Bunny Bunny, is Gilda Radner ... A Sort–of Romantic Comedy.

Radner, who died of ovarian cancer in 1989, broke out with wacky characters like Roseanne Rosannadanna and Emily Litella — she created them, but Zweibel put the words in their mouths.

Bunny Bunny, which is being produced this weekend at Armstrong Atlantic Community College, started life as a book.

The book, Zweibel said in a 1994 interview, “was never meant to ever be published. About three years after Gilda had died my wife said to me, ‘you need some closure here, you’ve never dealt with Gilda’s death. You never mourned, you never grieved, you never cried even.’ And so I sat down and I recreated the whole relationship as I remembered it, in dialogue.

“I didn’t even do it in paragraphs. There’s no punctuation. There’s no grammar. It was just for myself. It was my own therapy. It was just wanting the words to mingle with each other again.”

“From a directing standpoint, I thought ‘Well, whoever does this show really has to bring Gilda Radner to life.’ I welcomed that challenge.”

Vo wound up giving the lead role to Bobbie Renee Stringer, who’s in the theater program at AASU. “I was trying to not look at physical resemblance,” the director explains. “I mean, if someone walked in and looked just like her, that would’ve been great. From the pool of people that auditioned, I knew there wasn’t going to be anyone who looked like her, but I needed somebody who could embody her.”

At the final audition, Vo says, he had two excellent actresses to choose from. “It was a heartbreaker, but in the end I chose Bobbie and I haven’t regretted it since.”

Stringer is called to inhabit many of Radner’s most famous SNL characters, as well as re–create several well–known skits with the rest of the small cast (Zweibel is played by Wesley Dasher).

However, warns Vo, “the play itself is not really about the skits. And it’s not fully about her public life. It’s more of the stuff you didn’t see.”

Bunny Bunny was first produced as a play in the early 1990s, with Julia Louis–Dreyfus and Jason Alexander.

Of course, Vo and his cast members were just children then.

“As a curious young boy I used Google to look up the history of Saturday Night Live,” Vo says. “When I cast the play, they really didn’t know much — I said  ‘Hey, watch this, it’s really funny. Watch this DVD.’”

As for that curious title, here’s what Zweibel explained in that interview: