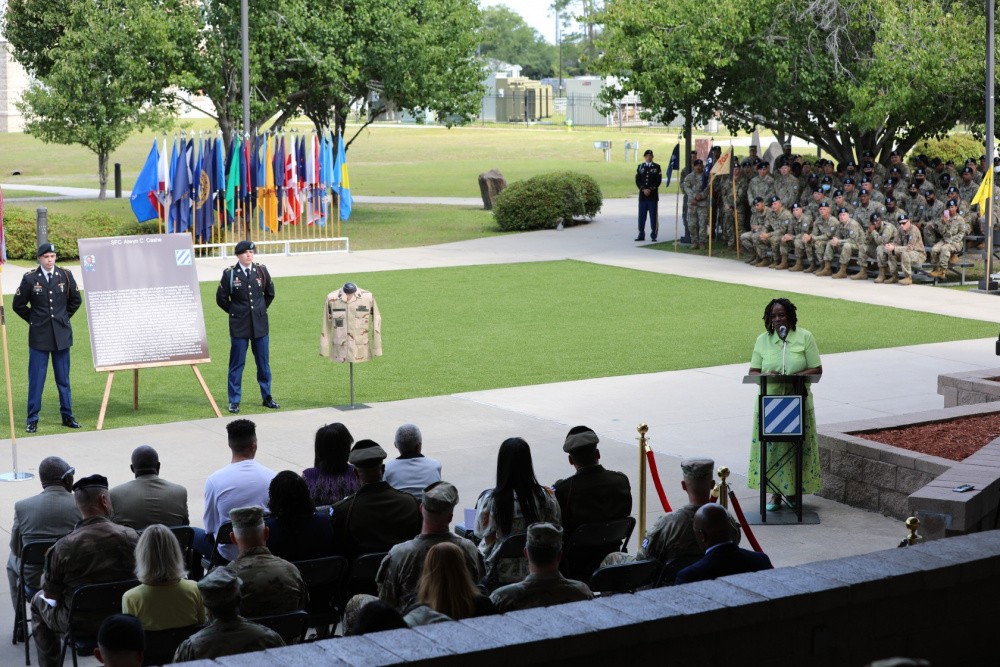 photo by Staff Sgt. Prosper Ndow
Kasinal Cashe White, the sister of Sgt. 1st Class Alwyn C. Cashe, delivers a speech during the Cashe Garden dedication ceremony on Fort Stewart, Georgia, May 20.
Once a hero, always a hero. Fort Stewart’s most prominent memorial garden was officially renamed May 20 to honor the selfless sacrifice of one of its leaders killed in Iraq in 2005. Marne Garden, located just outside the division headquarters, was renamed and dedicated to Army Sgt. 1st Class Alwyn C. Cashe, in a ceremony that highlighted the division’s Marne Week. “Marne Week has always been a way for us to connect soldiers of today with the heroes who served before us in this division,” said Maj. Gen. Antonio Aguto, 3rd Infantry Division commanding general. “We are very excited to do this; the Cashe Garden dedication is absolutely the most important thing we will do during Marne Week. More importantly, we are very excited that his family, friends, and soldiers with whom he served could join us to help celebrate and honor him.” Command Sgt. Maj. Quentin Fenderson, 3rd ID senior enlisted advisor, deployed with Cashe. He remembers Cashe as a selfless leader, who always put the needs of his soldiers above his own. “For the many of us who knew and served with Sgt. 1st Class Cashe, we know he wouldn’t want any of this - he didn’t need anything named for him,” Fenderson said. “He believed the only acknowledgment he needed was that his boys were safe.” On Oct. 17, 2005, Cashe, a platoon sergeant assigned to 1st Battalion, 15th Infantry Regiment, 3rd Brigade, 3rd ID, extracted six soldiers and an Iraqi interpreter from a burning Bradley Fighting Vehicle in Salah Ad Din Province, Iraq. Cashe’s platoon had been tasked to clear a route for a resupply convoy when a roadside bomb exploded beneath their vehicle, causing it to quickly become engulfed in flames. Cashe returned to the burning vehicle multiple times to remove his team and move them to safety. All of the soldiers on that vehicle, including Cashe, sustained significant burn injuries and were evacuated to Brooke Army Medical Center in San Antonio, Texas. Ultimately, four of the soldiers perished from their wounds; Cashe was the last to die, succumbing to injuries Nov. 8, 2005. “This memorial garden is where we do all our important events, like promotions and ceremonies,” Fenderson said. “Whenever our soldiers come here in the future, they will think of the heroism of one of our own [Marne] soldiers.” Cashe’s sister, Kasinal Cashe White, spoke on behalf of the family. They were greeted and honored with applause. “To me, he was known as Al, my baby brother,” White said. “He was a country boy from Florida, loved the outdoors and loved his family. Not only his blood family, but the Army family he gained while serving the Nation.” Cashe, who grew up in Oviedo, Florida, deployed in support of the Gulf War in 1991, participated in the 2003 invasion of Iraq, and returned to Iraq in 2005. He was awarded the Silver Star Medal prior to his death for his brave and heroic actions, the third highest award exclusively for military operations involving conflict. “When we looked at recognizing Sgt. 1st Class Cashe and his service and his heroism, we wanted to find a spot that everybody knows, everybody comes to, and is truly at the heart of our organization,” Aguto said. The 3rd ID has become a special part of the lives for those within Cashe’s Family. Every year, they travel to Fort Stewart to remember Cashe, and to share his legacy with others. “We’re honored that you have chosen a happy place for Soldiers to remember our Al, and we hope that his story inspires 3rd Infantry Division Soldiers for years to come,” White said. Editor’s note: U.S. Army Staff Sgt. Todd Pouliot contributed to this article. 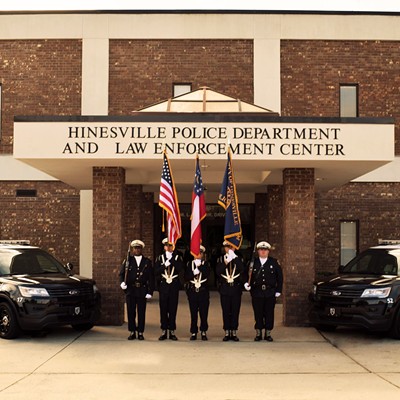