POINTED QUESTIONS from former Savannah City Manager Michael Brown turned what might have been a sedate meeting about tree policy into a more spirited discussion about civic priorities.

Held at the Massie Heritage Center and organized by the Friends of Massie, Wednesday evening’s panel “A Conversation About Trees” featured Gordon Denney, City of Savannah Greenscapes Department Director; Paul Daniels, board chair of the Savannah Tree Foundation; and Philip Perrone, member of the Savannah Park and Tree Commission citizen board.

Denney received the bulk of audience questions as well as the most direct questioning from Brown, who left Savannah city government in 2010 and was in the audience as a member of the public.

Brown asked Denny how many diseased or unwanted trees are currently being removed by the City each year.

“And how many are you planting each year?” asked Brown.

“Probably about 200,” answered Denney, to audible groans from the audience.

“So there’s a deficit,” said Brown. “Have you made a budget request to the city to plant more trees?”

When Denney appeared indecisive in his initial response, Brown cut him off: “It’s a yes or no, Gordon.”

Denney replied, “It’s not a funding issue. We don’t have the staff to maintain more trees than that. We are trying to plant as many as we can that we can actually maintain.”

Denney explained that he only has 22 arborists on staff who actually tend to the 66,000-plus trees in public spaces. 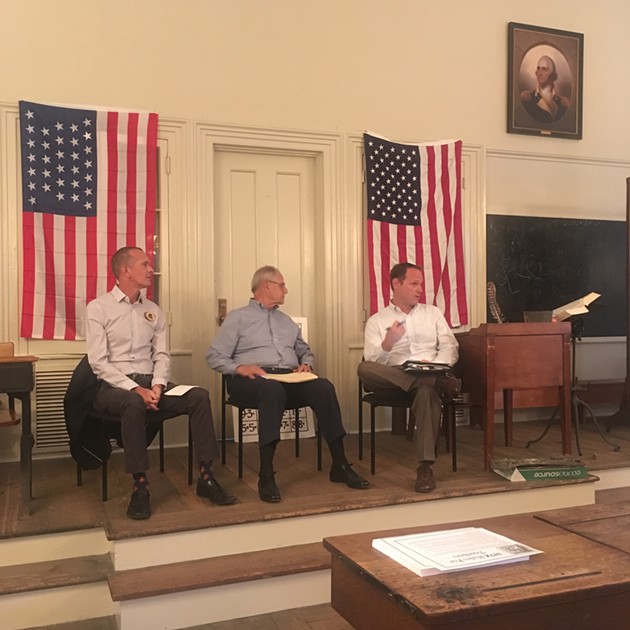 From left: Paul Daniels of Savannah Tree Foundation, Philip Perrone of the Park and Tree Commission, Gordon Denney, director of City of Savannah Greenscapes Dept.
In addition, Denney says he has constant difficulty filling what positions he does have.

“It’s 100 degrees in a bucket 40 feet in the air,” he said. “You’ve got a one-ton limb over a million dollar home. You’ve got about an inch to let it slip before you’ve got to get it off.”

Brown decried the recent restructuring of City departments, resulting in what he calls the “special status” of the Park and Tree Department being subsumed into a larger department called Greenscapes.

“No offense to the present folks, but there are no trees in ditch-digging. I don’t know what grass-cutting has to do with trees,” he said.

“My frustration is we’ve done a whole lot of reorganizing here, but that doesn’t get you anywhere,” he said. “What gets you someplace is a passionate devotion to solving that problem. We should go back to that passionate devotion.”

Estimating that Savannah tree policy has regressed back to the state it was 20-25 years ago, Brown criticized the lack of teeth in enforcing what otherwise is a good local tree ordinance.

"We have to establish priorities and a baseline. And not just allow a restaurant owner to cut a tree down and say, oh, they got fined $50 and made a $200 contribution to the Tree Fund. No,” he said adamantly, a clear reference to the controversy involving downtown restaurant Husk on Oglethorpe Avenue.

Brown said that when he was City Manager, “The approach that we took was to say that we’ve got to take out diseased trees and they’re going to come out at the rate of 700 or 800 trees a year. That’s simply the fact of the matter. But we want to plant a net increase of 200 or 300 trees a year. That was ten years ago. That takes a great deal of effort.”

Brown said the City doesn’t do enough with the authority it does have to enforce tree policy on private sector development.

“All cities have something called right of way -- they own it in fee simple. You can do nothing on it without the approval of the City, and sanctions can be placed on you if you violate it,” he said.

“I would suggest that the Tree Foundation ask the City now to update a tree inventory – a census – using the latest technology, which is probably cheaper, and use that as a benchline,” said Brown. “We can use aerial photography to confirm it. You can post it to make sure everyone can see it.”

Not all the meeting involved criticism of City policy. Philip Perrone had glowing praise for the City’s new tree lawn ordinance, which he helped craft.

“There are hundreds of acres of tree lawns in Savannah,” he said, pointing out that about 40 percent of the City’s entire tree total is in tree lawns.

“Savannah would not be the same without its tree lawns,” he said.

Perrone elaborated on the interesting history of tree lawns. Because sidewalks in front of houses came before the widespread paving of roads, he said, homeowners would plant trees between the unpaved road and the sidewalk.

“Just like Savannahians of today, they wanted trees in front of their house,” Perrone said.

“Then along came paved roads. And when they paved the roads, what did they do? Instead of destroying the trees, they put a second curb in front of those greenspaces,” he said.

If you look carefully at Savannah sidewalks, he said, “You will see two curbs – one embedded in back of the tree lawn, and the second curb on the other side.”

Up until two years ago, Perrone said, “tree lawns were taken for granted. They were being taken over by development,” with no new tree lawns being built.

The phrase tree lawn, he said, wasn’t in any City ordinance previously.

The new ordinance now requires that “any time a new project is built, tree lawns must be established. That’s what Pooler is dying to have,” he said, referring to controversies over the rapidly decreasing tree canopy in West Chatham.

Despite getting invitations, there were no elected officials from the City at the meeting. In this election year, there was a single candidate running for office in attendance, Nick Palumbo, who is running for Fourth District Alderman.