Frankly my dear, you should visit Rhett

Rhett is at 412 Williamson St.

RIVER STREET has commonly been a place many locals avoid because of the saturation of tourists. And though most locals love what tourism brings to the community, they love their own local watering holes more.

Many days it seems as though there are more new buildings popping up than tourists roaming the streets of the Historic District. So it never comes as a surprise to see a shiny new hotel joining the ranks among the others in town.

A true surprise is to find a delicious new restaurant nestled inside one of the many downtown vacation spots, especially one that sits near River Street and will quickly become a new favorite for many locals.

Rhett, on the lower floor of The Alida Hotel, opened its facing doors only a few short weeks ago. Although there has been no official press release, the word has been that many locals already adore the beautiful restaurant.

Director of Restaurant and Bars Arthur Sertorio sat down to chat with me before my meal, and explained the menu: “It is a pretty simple menu, it does not have that much selection but we really focus on the quality of the ingredients. All of the ingredients we get we get them from local vendors, and we are pretty proud of that. On top of that we make everything from scratch.”

The House Made Ricotta is a dish I have not stopped speaking about since the day I visited. In fact, I went back a second time to eat it before this article ran.

Upon your first bite you can taste the care that was placed into creating this dish. ”We make our ricotta from scratch. We press and we filter the cheese, we add some Georgia olive oil, and some za’atar spices to it,” Sertorio elaborated as we chatted.

Creamy is an insufficient term to describe the texture of the delicate homemade cheese. The delicate cheese gives way to the fresh grain flavor of the bread, resulting in a bite that taste as though you are sitting on the porch of a farmhouse.

Just as gentle as the cheese is the addition of za’atar seasoning—the appropriate amount is used so it does not overwhelm the flavors of the cheese and bread.

Luckily for patrons, the ricotta is featured on the menu two ways—for breakfast and as a starter. You can try this amazing dish no matter the time of day, and for breakfast you can expect the addition of seasonal fruit preserves. 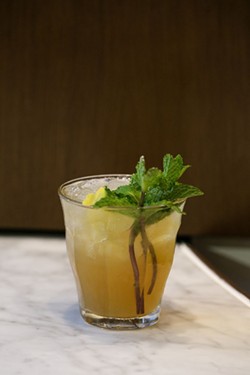 The Fried Cauliflower is Rhett’s homage to the south’s love of fried food, by elevating the fried dish through balance of flavors. The dish almost does not taste fried, but we Southerners can spot any fried dish from a mile away.

Sertorio summed up the dish perfectly: “We wanted to add something that is a little more refined. We have a cauliflower puree on the bottom and we add a lot of zest of lemon to fight the fatness of the dish.” You will also find a showering of briny fried capers which gives you palate a jolt of salt with each bite.

The final starter I devoured was Rhett’s take on macaroni and cheese, the Macaroni Gratin. As someone who has made and eaten a shipping container’s worth of the staple Southern side, I can state with confidence that Rhett’s version did not disappoint.

“We did a lighter version of it [macaroni and cheese]. The Monet cheese is like a bechamel sauce...we made it the french traditional way, super light, and we add flavor with the thyme bread crumbs on top,” Sertorio told me in explaining the starter.

As for the pasta, which may be the best part of the plate, it is made in house without eggs. Which also helps reduce some of the decadence, resulting in a more balanced dish.

My favorite part of the menu, besides the food, is the use of the term Supper to  describe the entrees available after 5 pm, it is a wonderful nod to the southern touches added to many of the dishes.

For Supper I recommend you step out of your steak or fish comfort zone and try the Celery Root Dumpling. The menu describes the dish as “country captain” flavors, which actually means the dish includes a coconut curry butter, Fresno chilis, pistachios, apple, and fresh parsley.

The celery root inside of the dumpling, which is more southern than Asian, adds a nuttiness to the finished dish. And although there are a ton of ingredients, every single one has a place in the dish, working together as one but still distinguishable as an individual element. I would call this entree magical.

The most Southern dish on the entire menu is the Roasted Pork, a large portion meat and three. Juicy herb crusted slices of roasted pork sit atop a Stone Mountain sized heap of roasted fingerling potatoes, fresh jalapeños, and tender fermented collard greens. A large sprinkling of boiled peanuts, a thick cut slab of bacon, and a beef sauce is used to finish the dish.

To ferment the collard greens featured in the entre, leftover whey from the process to make the ricotta is used. As for the sauce, Rhett attempts to waste very little and uses caramelized beef scraps to create the gravy.

I have not forgotten about the most important part of any meal—the drink pairings. The wine list was created by Sertorio, and features a well rounded yet concise group of wines.

“We try to go on the origin of the grape, so if you are going for Pinot Grigio we usually try to get the Pinot Grigio from Italy,” Sertorio told me.

A homage to Savannah, the Savannah Smash is the cocktail on their list that I will order time and time again. Bourbon, rainwater Madeira, lemon, peach shrub, and a large bundle of fresh mint are combined to create the cocktail. The hint of peach is just enough to cut through the throat-grabbing flavor of the bourbon.

Speaking of The Alida, Rhett

The Alida invites local families to book a poolside oasis

Rhett: ‘Southern Eclectic’ at the Alida