From the streets to the screen 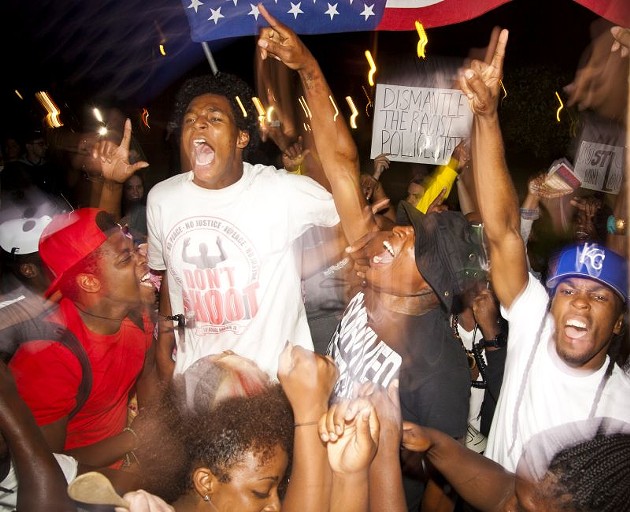 "50 years from now, when people ask about the Black Lives Matter movement, I will tell them to see this movie."

IN THE violent chaos that followed the 2014 killing of unarmed 18 year-old Michael Brown by a police officer in Ferguson, Missouri, the world heard many stories.

Accounts from newspaper reporters and analysis from political pundits about the protests made headlines and monopolized the spotlight. But few of points of view came from the people who actually lived through it.

Columbia University-educated journalist Sabaah Folayan traveled to Ferguson during the uprising following Brown’s death, initially thinking that she would write about the experience for a print publication or online. Once she arrived and saw the stark contrast between the newsmedia’s flat portrayal of the protestors and the human suffering she was witnessing, the Los Angeles native enlisted Columbia classmate and cinematographer Lucas Alvarado Farrar to make a documentary film, joining forces with St. Louis-based multimedia artist Damon Davis.

“We could tell there was something more to this story that wasn’t being reported and we wanted to figure out what that was,” Folayan has said in subsequent interviews.

“What was being put on the news was only catching the surface of the issues. Sensationalist, inflammatory language was hyping the story to get ratings, but as a society we needed to get to the truth and to positive dialogue.”

She and Davis followed several Ferguson residents as they staged non-violent protests, stood up to lines of police dressed in riot gear and cried in each other’s arms. The result was Whose Streets?, a long-form documentary revealing a vulnerable and compassionate community unseen in most mainstream reports.

The film premiered at the 2017 Sundance Film Festival on opening night and received a standing ovation. Lauded for its raw emotion and authenticity, Whose Streets? was quickly acquired by Magnolia Pictures for distribution.

It will show in Savannah at the Stage on Bay on Martin Luther King, Jr. Day, this Monday, January 15.

Hosted by Girls on Media, Monday’s screening is the first of two in Savannah. Another is being planned for late spring that will include a Q&A session with directors Folayan and Damon as well as featured protestor and nurse Brittany Ferrell.

“The film has far reaching importance and is best watched as a community,” says Girls on Media’s Shena Verrett.

“I’ve been to several screenings, and the Q&A component after it is viewed brings community and neighbors together in a dialogue of unity.”

Folayan has garnered much acclaim for Whose Streets?, including support from MacArthur Foundation and the Tribeca Film Institute and a Critics’ Choice Documentary Award nomination. Criticism has also been lobbed, for what some call “one-sided commentary” in the lack of interviews with police officers or government officials.

But Folayan makes no apologies, answering critics with the observation that those people’s stories have already been told. Whose Streets? is meant to give platform and voice to those whose first-person accounts have rarely been honored or heard.

“We are intimately aware of how we are portrayed in the media, and this portrayal encourages both conscious and unconscious racial bias. We are uniquely suited to make this film because we ourselves are organizers, activists and deeply connected to the event of August 9 and beyond,” write the directors in their artistic statement for Whose Streets.

“We are making this film, in part, as tribute to our people—our deeply complex, courageous, flawed, powerful, and every hopeful people—who dare to dream of brighter days. This is more than a documentary...this is a story we personally lived. This is our story to tell.”