During the hourlong show, Chris Williams and Matt Nickley talk about, basically, anything 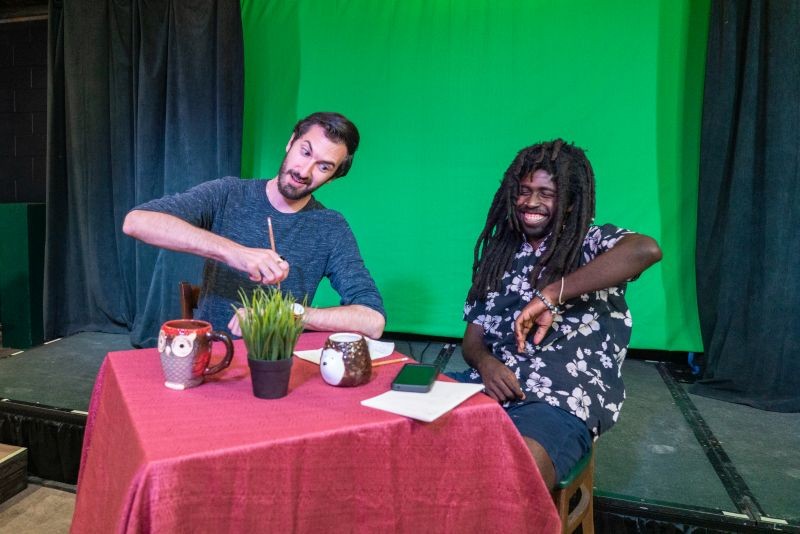 Photo by Christopher Danger Mendrala
Front Porch Improv’s new show, Hot Takes, features Matt Nickley and Chris Williams in a format where everything is up for discussion.

FRONT Porch Improv was poised to have an incredible summer.

Back in spring, they were riding the high off the opening of their theater, a crowdfunded effort years in the making, and a successful run of shows as well as the Savannah Comedy Festival.

But just weeks after the opening, COVID-19 came to town, forcing the group to shut their brand-new doors and think of new ideas.

“We’re throwing fishing lines out in the water,” says co-artistic director John Brennan, “and every time one pulls, we’re like, ‘Okay, we’re focusing on this!’”

One of those lines that got a pull was improv shows via Zoom, a popular video call app. After a show, Brennan noticed that all the participants were still on the call—quite a feat, as most users trickle away as the Zoom goes on.

The participants started chatting with the improvisors, which is how Front Porch’s new show Hot Takes was born. During the hourlong show, Chris Williams and Matt Nickley talk about, basically, anything.

“We have a world of freedom with the format and can really follow the fun wherever it pops up,” says Nickley. “We don’t go into the show with an agenda; it’s really about expressing often outlandish opinions on mundane things. It’s all about bringing joy and laughter to people, no other motivation than that.”

“It gives us an opportunity to do something a little more grounded,” says Williams. “Although it’s a comedic show, it’s way more reliant on us being ourselves as opposed to playing characters.”

When you watch a Zoom show by Front Porch Improv, you’ll hear a few laughs in the background. Those are courtesy of the quarantine crew, a rotating group of about four cast members who are in the audience. But those are the only laughs that the performers will hear.

Improv relies so heavily on crowd interaction that it seems odd for a show to happen without much of it. But the performers are doing just fine in the new circumstances.

“It’s been an adjustment, but I really enjoy the fact that people at home actually take time out of their day to watch us, especially with all the options at their fingertips,” says Williams. “And the relative distance of Zoom compared to live audiences, I think, opens people up more to being interactive.”

“Selfishly, I miss the live audience and knowing what’s working or what’s falling flat,” shares Nickley, “but with Zoom, you’ve really got to trust your gut and commit to whatever the bit is.”

“Laughter is like a rudder on a boat: it definitely points you in the right direction,” she says. “You’re like, ‘Oh, people are engaged, they like this topic.’ As a performer, you use that. You can tell they’re interested in that. We have the quarantine crew, but four people is not 120, so it does feel different. It’s definitely tailor-made for those four people, but at the same time, it’s really made me go inward of what I think is funny.”

Zoom shows have been working out so well for Front Porch Improv that they plan to continue them well after things return to normal. (Halverson rightly points out that sometimes people just want to watch comedy on their couch, and Zoom improv is perfect for that.)

But even determining what normal will look like for Front Porch Improv post-pandemic has been a bit of a tough line to walk.

“I think we’re staying positive, but also being really realistic. We don’t want to ever feel like we’re being unreasonable by doing a comedy show,” says Halverson. “I do agree that life has to go on at some point, so when we feel like we can do it really safely [we will].”

Front Porch Improv is looking at online ordering for both tickets and drinks, putting seats eight feet apart instead of six, and alternate methods of checking in when arriving as goals for when they reopen the theater.

“I do know that some people are never going to feel safe until there’s a vaccine, and some people already feel like it’s safe,” says Halverson.

“Here’s what we’re doing and we understand if this is not enough for you, but we also lovingly say, ‘What else do you need us to do?’ We have all the information we have,” adds Brennan. “If you don’t feel safe, stay home—these are weird times.”

“The nice thing about improv is that we are nimble,” says Halverson. “Our training is literally, ‘Yes, and...’ So, ‘Oh, this is different. Yes, and we’ll do this!’ I’m worried about independent venues, like Upright Citizens Brigade and IO. Of course that’s a consideration. The Savannah community has been so wonderful to us.”

Through its GoFundMe page, Front Porch Improv has managed to raise three months’ worth of rent thanks to the generosity of the local community. However, that rent runs out this month, so the group is back to the proverbial pond to throw out some more lines.

Front Porch Improv has a game show starting next week as well as a sketch show that starts in July. They offer improv classes for businesses who want their employees on the same page, and they’ll do training for kids’ therapy improv with Chatham County Safety Net in September.

They’re also doing lots of outreach—Brennan is known to invite Uber drivers to an improv show—one form of which is their diversity outreach.

“At every show, I mention that we want our cast to reflect what the city of Savannah looks like, and it doesn’t yet,” says Halverson. “The truth is, it’s on us. John and I are like, ‘It’s been slow, sometimes people aren’t applying.’ Well, no. People don’t need to find us—we need to find them.”

Front Porch Improv is passionate about bringing the art of comedy to our community and making sure that audiences feel represented and have a great time. It’s important to remember, though, that this is a side hustle for everyone involved.

“At this point, I can’t do anything else. I’m too drawn to it,” confesses Halverson. “I’ve done other things and put it off, and I’m like, ‘No, I can’t put it off anymore—I have to do theater, and I want to do it here.”

“I think the common consensus, which is correct, is that if you start an improv theatre, you’re not in it for the money,” laughs Brennan.

“None of us are independently wealthy. We’re all working jobs. We’d love to have this be our full-time job, but it’s not,” says Halverson. “The reason we’re staying afloat is because I honestly think this is a giving community, and we hopefully paid it forward by doing charity shows and donating scholarships. People realize we’re not out to win this—we’re out to make Savannah a better place.”