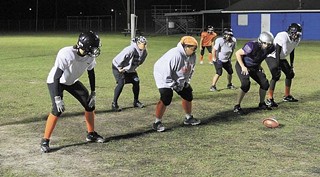 The Sabers practice three nights per week in preparation for games

Given her genteel nature, the Hostess City might not be the first place you’d expect to find a lot of full contact women’s sports, but their numbers are growing. First came the Shamrock’s Women’s Rugby team, then the Derby Devils roller derby squad, and now the Savannah Sabers, the area’s first women’s football team.

The Sabers are three games into their inaugural season – part of the Women’s Football Alliance, a league of more than 60 all–women teams across the country, which has been growing quickly over the last several years.

“There’s definitely people that are skeptical about it,” explains Andi Pigneri, who is both the team owner and a player.
“The number one question I used to get was, ”Are y’all the lingerie league?“ No. We’re not. This is the real deal.”

On Saturday, the Sabers, who play at the football stadium in Garden City, have a home game against the Carolina Wolves – a match up that could make or break playoff dreams for each.

Pigneri started the team several months ago, initially expecting to round up a couple of people, starting some practices, and then launching a team in 2012. But the response was overwhelming, and she soon discovered dozens of women with pigskin ambitions.

“They’ve watched it their whole lives, and sat on the sidelines, but they want to try it and do it,” explains Pigneri. “When I was growing up, my dad wouldn’t even let me play flag, because he thought it was un–lady–like.”

Jessica Kui, a cornerback for the Sabers who will make her first appearance on the offensive side of the ball this weekend as a running back, grew up playing backyard games of football with her older brother and his friends.

However, even after serving in the army and training regularly for kickboxing, Kui was surprised at the physicality of women’s football.

“It’s a contact sport, but it’s more brutal than I thought it would be,” she says. “I walk around here with bruises on my arms and legs. I have to explain myself. My husband is not beating me.”

Explaining the bruises or sore limping has become as regular a part of the players’ schedules as practicing for games.

They all have day jobs – nurses, moms, members of the armed services – but three nights a week, they are out on the field running drills to prepare for games on Saturday nights.

“This isn’t your career,” says Pigneri, who spends her days working at Target. “Some teams you can make some money off it, but it’s not enough to make a living.”

She discovered her love of football while living in Louisville, KY where she played two seasons with a team called the Karma before moving to Savannah. Even though she knew that starting a team would require a lot of time and money, she missed playing enough to justify the expense.

“Football is a very expensive sport,” Pigneri says. “It starts with equipment and then the stadium itself, security, referees – that all gets expensive.”

After putting up fliers and finding some interested ladies, they undertook a series of fundraising efforts, including car washes and yard sales to begin raising the necessary funds – beyond the practical expenses of putting on a game here, there are also league fees, travel expenses for away games and other costs.

Although the return on her investment won’t likely be a multi–million dollar contract, the experience has already paid dividends.

“I get a lot of people who come up and say thank you for putting this together,” she says. “A lot of girls say they’ve always wanted to play, and now they can. For me, that’s the best.”