“I just thought that was such a baffling number,” recalls Cook, “especially because it’s children. It’s not like they can run away.”

The number 1,500 stuck out to Cook, and she knew she had to do something to convey the weightiness of that number.

“It’s almost like I have to do this because my brain works in this conceptual way, and I’m able to express things in a way where people can see it,” Cook explains.

That’s how the 1,500 Hearts Project came about.

Cook has created garlands of 1,500 red crocheted hearts that she’ll hang at an installation this Friday night. 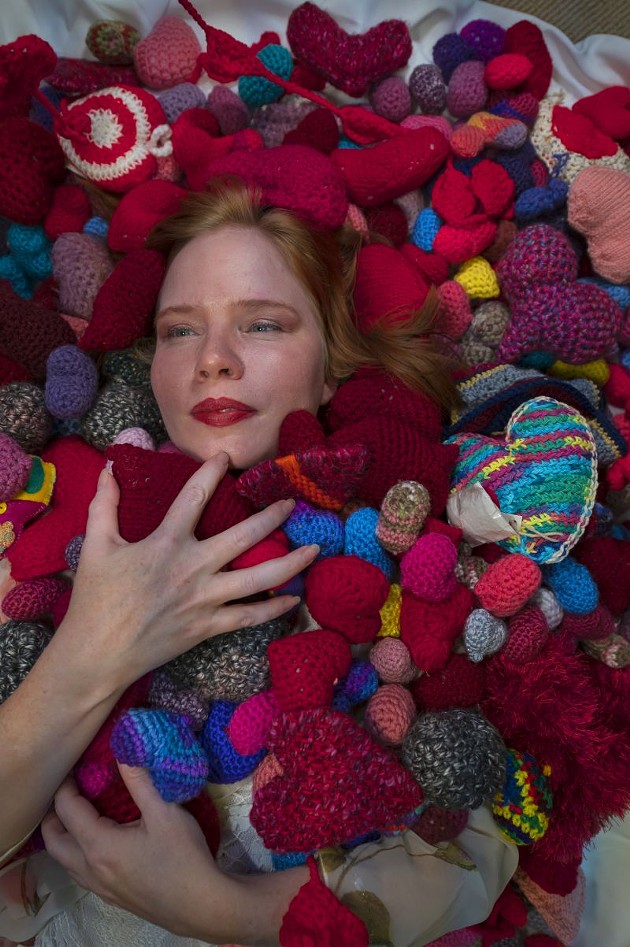 She also has fiber artists contributing work from around the globe, from here in Savannah to England and Hong Kong.

At the time, Cook lived inside Sulfur Studios for three days, creating chain stitches to represent each of the 2.2 million incarcerated Americans. Let that visual imagery of 2.2 million stitches sink in. The body of work was immersive and incredibly moving.

The numbers that Cook works with are massive, almost unfathomable figures.

“Numbers are thrown around a lot. We hear statistics all the time,” says Cook. “I think if you present them in a visual aspect, it creates a conversation.”

Numbers like this have the potential to become meaningless if we don’t introduce empathy with our statistics.

“That’s the point of me making this,” Cook says firmly. “I think we are desensitized. I really felt like the story was swept under the rug. ‘Oh, this happened. It was tragic. Let’s have our thoughts and prayers and move on.’ But how do you lose 1,500 people? Especially children? It’s baffling to me.”

While Cook herself takes a stance on the issue, she keeps her personal views out of the art she creates.

“I know it’s very political, but at the same time, I don’t want my thoughts on it,” Cook says. “I just want to present the number. This is the fact, and what do you think about it? Let’s have a conversation. I think that’s how we can move forward as humanity. I just want to present something.”

Cook shares that after “Chains,” her grandfather called her to share his disagreement with the piece. When she told him that she hadn’t put an opinion into the work, he replied that he knew how she probably felt.

“Well, you can’t put that on the piece,” Cook reflects. “I didn’t put it on there—that’s just because you know me privately. You can disagree, but I’m making this piece so we can have this conversation.”

Fortunately for us, Cook is the perfect person to take on these challenging conversations because that’s just the way her mind works.

“I think my mind is a little weird because I can do these really tragic pieces,” Cook explains. “Of course, I’m very humbled to be able to make this piece, but I understand there’s some kind of weird strength I have to have to be able to create something that’s really kind of tragic.”

Cook takes on the emotional baggage that comes with such difficult topics, but she has a strong cohort of supporting artists contributing to the project.

“It really felt good to have [that much participation],” Cook says. “It brought together a lot of people. It was really wild. American politics are very much a world situation.”

Cook believes in traveling the world to learn more about other cultures, which she believes would foster more compassion between each other.

“I think people are compassionate, but they’re just so desensitized,” Cook explains. “It’s hard for people to grasp these concepts. I think there’s a lack of knowledge.”

Growing up in Southern California, Cook was friends with many migrant workers from Mexico.

“Seeing how this can happen to people,” says Cook. “These people are flesh to me. They’re fleshed out because I’ve met them. I know them.”

At the exhibition Friday, which is one night only, Cook seeks to build some more empathy around the 1,500 children by creating a childlike environment. There will be clowns, a puppet show, and a ball pit with crocheted hearts, but Cook will pull it off with sensitivity.

“Of course I want entertainment, but I want it to be sensitive. It’s not a party,” she explains. “It’s a sad thing, but it’s also about children, so I wanted to add something about that. How would I feel as a child? I probably wouldn’t understand what was going on.”

The exhibition is sure to be a powerful, transformative experience.

“It’s more of an experience. I really like to change the viewers’ environments when they walk into a space,” says Cook. “I want them to feel something. I’m expecting it to be something people can walk through so they’re actually walking through it.”