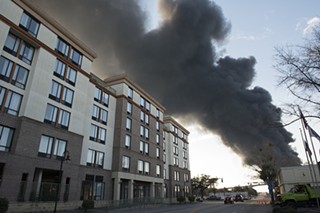 Firefighters from Savannah Fire and Emergency Services with help from the Garden City Fire Department worked to contain an enormous rubber fire at the Georgia Ports Authority's Ocean Terminal warehouse No. 3 on West River Street from about 11:30 a.m. Saturday and through the night and well into Sunday morning.

As of Sunday afternoon firefighters remained at the scene battling occasional flare-ups in the rubble.

West Bay Street between East Lathrop Avenue and Fahm Street were reopened to traffic after a period of shutdown on Saturday. Heavy smoke affected portions of Interstate 16, Interstate 516 and Interstate 95 as well as the Talmadge Bridge.

No injuries were reported.

• A Savannah man has been arrested after shooting his finger in a reported accident.

Alajuawon Williams, 23, of the 1100 block of East 31st Street was transported to Memorial University Medical Center for treatment of the injury after the 2:55 p.m. shooting. He was taken into custody upon release after Savannah-Chatham Metropolitan Police violent crimes detectives determined the gun had been stolen. Williams was charged with theft by receiving stolen property.

Downtown Precinct Patrol officers responded to the area of Price Street and Duffy Lane where Williams reported he was checking the weapon to assure it was not loaded when he accidentally pulled the trigger. The investigation is continuing.