Comic and collectibles store opens on May 4

Odin and Sons hosts its Grand Opening Sat., May 4 at 9 a.m. The shop is located inside Mad Mac's Bakery and Café on 6 E. State St.

SEVERAL years ago, Le Snoot was one of the coolest galleries in Savannah.

The print shop at 6 E. State Street doubled as an exhibition space, but it felt so much more approachable, forgoing traditional white walls for wood pallets and hosting call for entries with themes like Adventure Time.

Then it folded, and its creator Logan McDonald was left to find something else to do.

That new thing is Odin and Sons, a comic and collectibles store opening this Saturday.

(That’s not the only comics store opening on May 4; Neighborhood Comics is located at 1205 Bull St.)

In conjunction with the Odin and Sons opening, Le Snoot is returning for a juried show, “TOYS: An Art Show for Ages 3 and Up.” 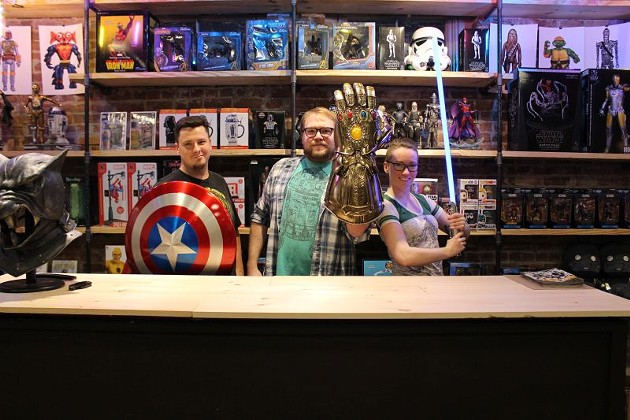 We spoke with McDonald last week.

How did Le Snoot begin?

I’d been at SCAD for quite a while, and I went through animation and film and ended up in illustration. Those, to me, were the best people. The talent there was insane. I got some people together and I was like, “Let’s do something different.”

I really didn’t know much about owning a gallery. The real idea behind it was that we could bring in these great digital printers and bring in art, not just from Savannah but from anywhere in the world. The bigger picture behind it was that illustration students were not getting enough recognition. We wanted a place where we could have shows like “Three Little Prints.” We had Steven Darden, and he immediately went to Adult Swim.

We sought out talent and put it out there. Just bring us a show, we’ll print everything and put it on the walls, we’ll give you a good chunk of what happens, and we’ll keep going.

For quite a while, it was a very cool concept. So of course things went bad.

It feels like poetic justice that we’re back in this location because we got kicked out of this location. People didn’t know that. At the time, we had basically six months to find a new location to get everything going. We had a lot of artists we owed money to, andwe could either pay the artists a portion and look for a new location, or we could just close it all down and pay the artists. And for me, I had six or seven years of my life in in savings, plus the time there.

When you own a business, you can’t say you’re in trouble. We tried to keep it as positive as possible. We moved to a new location and had some serious trouble with the landlord.

That sounds about right for downtown properties.

It’s a big part of what’s been going on in downtown Savannah. You have your creatives and they fix up places and make it work, and then they’re part of building the outskirts and making the popular areas grow. Then you have your wealthy individuals. Le Snoot was a joke about snooty people. That’s why we didn’t have any of the white walls. That’s why we didn’t do any of the traditional gallery stuff.

Where does Odin and Sons fit in?

After Le Snoot, I was a little depressed. I was feeling pretty defeated. I lost a ton of savings, and I just had to quit and walk away. What brought me back was doing these still lives of old action figures. I started out doing He Man and Star Wars and the Ninja Turtles, and every one I did was getting better and better. It connected me to my childhood.

I feel like it’s all meant to be. I think this industry is ready to grow. Comics used to be something that were looked down upon. Walking into a comic book shop in almost every scenario is an uncomfortable experience. It’s not inviting, there’s nobody greeting you, there’s no one helping you. If you’re not already deeply into comic books, you walk in and there’s like a thousand comic books. Where do you start? In most cases, no one’s there to walk up to you and say, “Hey, let me tell you some stories. Let’s get you started on your journey.”

The counter at Odin and Sons.

So we’re really looking to take that and run with it. Obviously, you can’t judge a book by its cover, but you always start there. We’ve had so many people you would not expect to be into comic books come in. These people are not the people that would be walking into the comic shop that has water leaking from the ceiling and has a guy leering at you from behind a counter. We want that joyful experience.

We also think that everything is ready to soar for comics. It might not be this year, it might not be next year, but I think the market for comics is about to double because of women. Women historically don’t read comic books. After Wonder Woman came out, I was giving out candy on Halloween and I started seeing little girls not in princess outfits but in Wonder Woman costumes.

The culture is changing for the better, and it’s insane how quickly it’s happened.

How did you choose when to plan the grand opening?

We were talking about it for a while and we thought about opening up back in March. We just kind of put it on hold because we were looking at everything and we were like, “Wow, look at April.” Game of Thrones is ending, the first ten years of Marvel is ending, and then of course May 4 is Star Wars Day and Free Comic Book Day. It’s the perfect geek storm going on right now.

We’re trying to do a lot of trivia, a cosplay contest, and we’re giving away 2,000 comic books. We’re trying so hard to be prepared.

At Le Snoot, our very first show was “Three Little Prints,” and we had an obscene amount of people show up. We had a line out the door before we opened and it stayed there all night.

The truth about Le Snoot