THERE AREN’T many Savannah institutions left that have made it to three decades.

That’s how long Geneva Wade has been filling the bellies of our community. Cooking for most of her adult life, Geneva is renowned to many locals and for good reason.

She started with Geneva’s Home Plate, which served Southern and Cajun dishes, and over time, she has sold various versions of love-filled food.

“I’ve been doing this for a little over thirty-six years, off and on. I first started in the restaurant business back in 1983,” Wade recalls.

“My first location was right in the historic district [at] Hall and Habersham street. I stayed there for several years and then I branched out over to the Bee Road center location, right across from the park. I closed that one down after several years then moved over to Victory Drive.”

Savannah lost Geneva’s in 2010 when Geneva took some time off for personal reasons. However, Savannah is lucky, because Geneva loves it so much she couldn’t stay away. 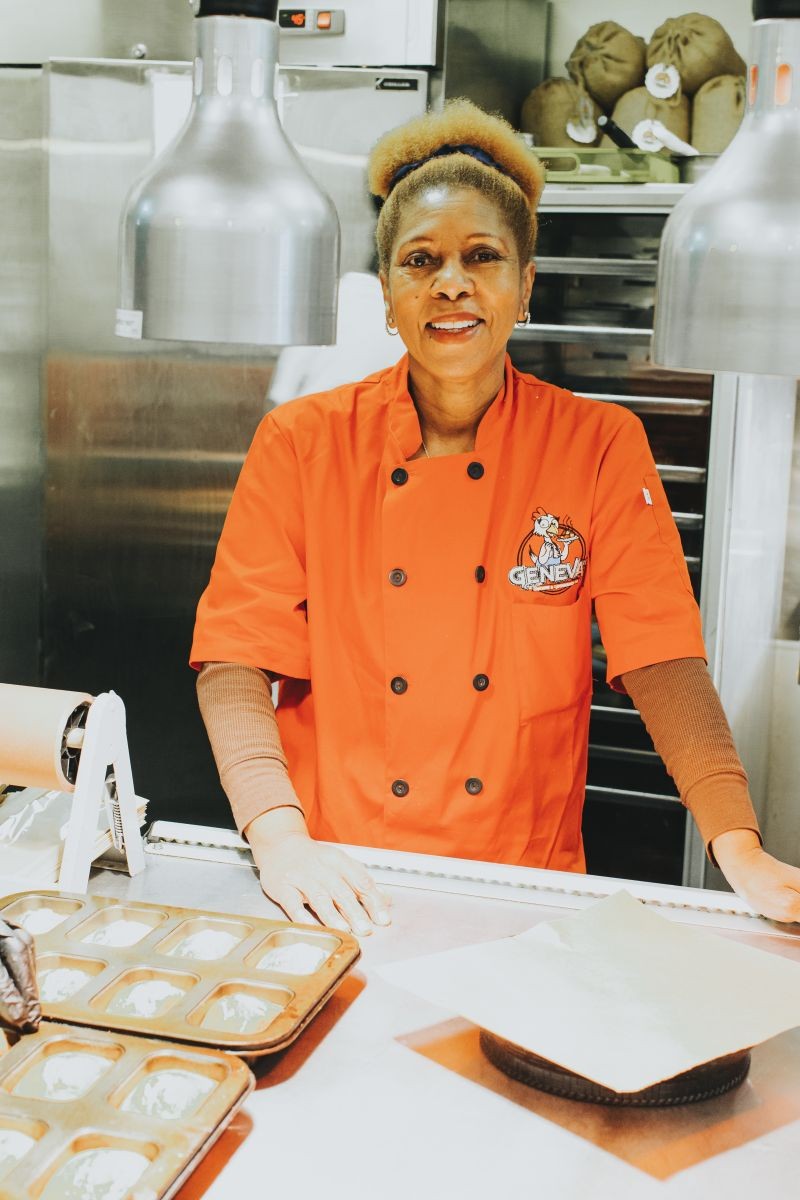 The great Geneva Wade in her kitchen.

She decided to grace Savannah once again with her soulful cuisine this year by opening the doors to Geneva’s Famous Fried Chicken and Cornbread.

The new location sits close to a previous location: off Victory Drive near the intersection with Skidaway Road. It is quaint, homey, and constantly filled with patrons.

I feel especially lucky because she has opened in my neighborhood—it’s a much welcome change from the sea of fast-food chains that sit off of Victory Drive.

“That is what we have done for this area, to bring a little bit more to the table rather than just everything being fast food. We serve lots of fresh vegetables here and we sell a variety of chicken, not just fried,” she says.

The fresh vegetables she is referring to are both her regular and premium sides. All of the homecooked favorites are available—yams, green beans, mac and cheese, squash, slaw, and everything in between. All of us know that only true Southerners consider mac and cheese to be a vegetable.

Some of the sides reflect Geneva’s history. Her original Geneva’s Home Plate location was inspired by creole flavors in addition to the southern favorites. Keeping true to her roots, the premium sides include chicken gumbo and rice and beans.

You may be asking, “Why chicken and cornbread?” Geneva makes it clear that creating and sharing her long-developed cornbread recipe is special to her. There are currently six types of cornbread.

As a Southerner with a heart for cornbread, I have only ever found it with one or two variations. The half a dozen options at Geneva’s include original, jalapeno, mexi, pecan, broccoli, and blueberry.

Each variation has a corresponding butter that you can slather all over the warm bread. Honestly, the bread is so moist the butter is just an extra treat for your palate.

Sunday’s Special Oxtails with yams and mac and cheese.

“We actually do twelve flavors of corn bread but we only presented six to the public. We did not want to overwhelm,” Geneva says. Each year Geneva’s will release one of the twelve variations of cornbread.

The cornbread is available in three sizes, mini, big, and jumbo. I say go for the mini so you can order one of each variation.

According to Geneva, “The cornbread is made from scratch. It is made from flour and cornmeal. It does require quite a bit of butter to make it, and I think that is one of the secrets of it.”

As the kitchen pulls out trays of freshly baked bread, Geneva insists I sit down and eat some cornbread with her. I’m glad she didn’t take no for an answer. The jalapeno was balanced with just the right amount of heat, and the bread itself was slightly sweet with a savory flavor of cornmeal.

So, what about the chicken? With over thirty years of experience, it goes without being said that the chicken is the showstopper. And although most people expect fried chicken when they think of Southern cuisine, Geneva’s offers chicken tenders, wings, and roasted chicken in addition to the classic variation. 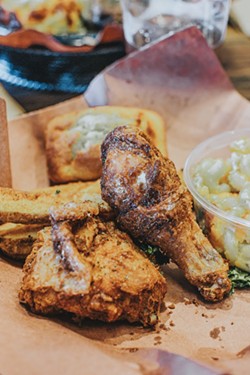 If you opt for the Southern favorite, classically fried, your plate will include a hefty portion of extra crispy, moist, and tender chicken.

Each serving of bird has many different sizes, and many different sauces. According to Geneva, “Our roasted birds are made here, and we have different flavors. Chipotle lime is roasted then marinated in a chipotle sauce. We have an orange marmalade. The sweet-chili red pepper is by far the best seller; it has the sweet and the heat. We do our wings in those sauces as well, but you can still get the original fried.”

Keeping with the Lowcountry flavors, you will also find Ogeechee Crab Cakes and Fantail Shrimp on the menu. Geneva’s doesn’t serve just any old crab cake. As you would expect and in line with her chicken and cornbread, she has created a special lime sauce to pair with the dish.

As for dessert, the Mistake Cake is as famous as Geneva herself. It’s a recipe that she has kept with her since the original 1980 location—a pound cake made with pears.

The mistake is that it was originally created to be made with peaches, but Geneva grabbed the wrong fruit.

She tried the pears she mistakenly purchased, and the cake came out perfect. It has been present on the menu ever since.

If you don’t have room, I suggest you grab one to take home after your meal.