LAST COLUMN, I made some sweeping generalities about the different stakes that exist for various parties within the process of neighborhood change dubbed "Gentrification."

This week, as promised, I’m changing gears. I’m going from a landscape painted in broad strokes to a close-up portrait of one person on the cusp of multiple categories. 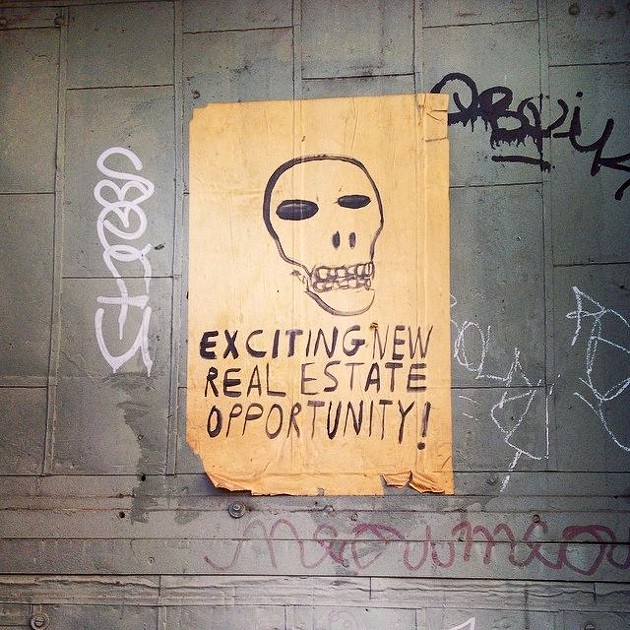 Ashley is a young professional a bit over 30. She is a transplant to Savannah.

She attended SCAD and then stuck around to continue working for the university (she did as a student as well), where she has already climbed her way up into a fairly high staff position for someone of her age.

Ashley likes living close to downtown. She has rented her current apartment for three years.

It’s the bottom unit of a traditional up/down duplex in the northwest quadrant of the Thomas Square Streetcar Historic District, an area that has not yet completely escaped the pejorative label of “The Dirty Thirties.”

“It’s all Jefferson Street’s fault,” asserts Ashley, sticking up for her area.

Overall, she’s fond of her street and her neighbors—even the SCAD students that live in the unit above her. Sometimes there’s noise when their friends meet up there before going out, and sometimes she can smell weed being smoked. Neither is a big deal to her. It’s part of living close to others, which she likes.

But the duplex is now on the market.

The owners live in a gated community on Wilmington Island. This is their only rental property, which they manage and maintain themselves. Apparently, two hurricanes in two years have diminished their desire to look after extra properties, and they have decided to downsize their holdings.

Besides, their investment in this rental property has already appreciated considerably. They bought it back in 2011. They put some money into renovating it, though exactly how much is unknown.

Now, the listing price is over 100K more than they paid for it a mere six years ago. Not bad—especially when you consider the rental income during those intervening years as well.

Ashley could cross her fingers and hope that the new owners will keep it as a rental property, allowing her to renew her lease once it expires in 8 months. But even if this is the case, she would still face continual rent increases, as demand for housing in the area grows faster than supply.

“I’ll just have to keep paying more for the same thing,” she knows.

She’s already had rent increases at this location—why would that stop?

So, Ashley has a big choice to make. Is it time to make the jump from renter to owner? She doesn’t want to move. She knows that she likes the structure itself, and the area, despite its faults.

She’s confident that the area will continue to improve. She could buy the duplex herself. Ashley is concerned about her ability to pull together money for the down payment, smoothing out some blemishes on her credit record to get a good loan rate, and the increased responsibilities of homeownership. But the upsides...

Remember, not only would Ashley become a homeowner—she would also become a landlord. It’s quite likely (perhaps certain?) that in buying the duplex, Ashley could actually decrease her living expenses while also building equity, thanks to the rental income.

With just a few signatures, the idea of rising rents goes from being a burden to a wealth-creating boon.

So: Does this make Ashley a Gentrifier? Is that even a bad thing?

I asked Ashley these questions.

“You know, I never thought I was (a Gentrifier), but now...” She doesn’t finish the thought, yet.

Ashley will not be displacing anyone by buying the property that she currently lives in—at least not yet. She would let the students upstairs stay through their lease, but then she would probably like to move into the upstairs unit herself (less noise, more security).

The newly revised STVR ordinance allows this by-right in the other unit, as long as she continues to live there as well. Some of her neighbors do this, and make quite a bit of money from it.

Whether or not Ashley deserves the label as a “Gentrifier,” she will definitely benefit from Gentrification if she buys the duplex—in the short-term through rents, and in the long-term through appreciation of property value. She will be along for the ride.

Now let’s do a little thought experiment —how do you feel about this?

Does Ashley deserve these benefits, when the same process of neighborhood change will likely displace others that are less fortunate?

Should she be ashamed—carry a sort of Gentrification survivor’s guilt?

For those that might be pro-Gentrification, or neutral on the subject, the answer might be easy: of course Ashley deserves the benefits— that’s the way the market works. Good for her.

But I’m more interested in how the anti-Gentrification crowd might see this one, especially if they assumed that Ashley is white. I will admit this was my intention.

Yes readers, I have fibbed. SCAD is not the institution that Ashley is affiliated with, but rather Savannah State University (SSU), our local HBCU.

Yes, Ashley is African American. Everything else is as previously described.

To many in the anti-Gentrification crowd, their problem isn’t so much with the process itself, but with who is naturally in a position to take advantage of it (typically white people), at the expense of those who are not (typically disadvantaged minorities)—the social equity of it.

So, to them, does Gentrification become more palatable when a more diverse group is able to benefit?

African Americans have less access to capital, and thus less ability to own property. Full stop.

And as they say, it takes money to make money. Therefore, it is much more difficult for black people to build wealth.

If you don’t already understand this, I’m not going to be able to convince you of it towards the end of my bi-weekly column in the alt-weekly.

But what if Gentrification can be used to lift more of the disadvantaged? Appreciating values in a Gentrifying area could actually be used to help secure loans, i.e. banks could make loans to riskier borrowers at low rates and low down payments because losses are unlikely if the property must be foreclosed on. This would have to be a structured program, as banks are naturally inclined to avoid risk unless they payoff is greater.

It’s a thought: Help more people like Ashley to buy in and use the appreciation of land values to climb the wealth ladder themselves. I’ll be exploring this idea further, with social justice advocates and people in the mortgage industry.

This series will continue, although I might need to break it up to allow myself some opportunity to be more glib and snarky, on less weighty issues.

On a final note, it looks like Ashley maybe didn’t move fast enough. The duplex went under contract the same day she got serious about exploring the option of buying it herself.

It had been shown by the listing agent several times, and the sellers knew that she was interested, so the fact that it went under contract probably means that they got their asking price, or very close to it.

But, this contract is contingent upon the prospective buyers being approved for a loan, so Ashley still has a chance to snatch up the duplex if they are not able to close.

She’s gotten her pre-approval for the necessary loan. She’s figured out a way to get together the required down payment. Even if she doesn’t get this duplex, she’s ready to look elsewhere in the neighborhood.

She’s ready to buy in and benefit from the change herself. She’s looking to grab a piece, though she’s still conflicted.

“I struggle with if I am being a Gentrifier, if I end up buying in this area, or if I’m being Gentrified, as a renter,” she says.

Looks like it has to be one or the other.

An Ardsley Park bungalow and Gentrification 2.0

A Lone Wolf at the door or just the winds of change?