‘Then Is Now’ features scenes of coastal Georgia

GEOFF L. JOHNSON knows his way around these parts.

From attending SCAD for photography in the ‘90s to scouting locations for photo shoots, Johnson’s knowledge of the coastal Georgia region is extensive.

Throw in his passion for history and you get his latest exhibition, both a retrospective of his work and an appreciation of our coastal region.

“Then Is Now: Exploring Coastal Georgia” is a collection of Johnson’s photographs featuring some of the Lowcountry’s landmarks. The exhibition is up now at In Vino Veritas and will hang until Nov. 2, with an opening reception on Oct. 12.

Johnson, a regular contributor to Connect Savannah and other local publications, is one of Savannah’s most sought-after photographers. As a result, he often gets called to the same places for shoots, but he finds a way to make the shot unique.

“All of these iconic Savannah locations that everyone takes photos of, as a professional photographer I get hired to go to these places over and over through the years. Sometimes the elements just come together,” Johnson explains.

The photographs in “Then Is Now” deliver a twist on the photographic staples of the area—“Wormsloe” is slightly off-center instead of the traditional tree-lined drive shot. “HMS Bounty” offers a juxtaposition of centuries-old tall ships sailing the Savannah River and modern cranes in the skyline. Johnson was shooting the Tall Ships Festival in 2012 for Visit Savannah and spent the day aboard the HMS Bounty. 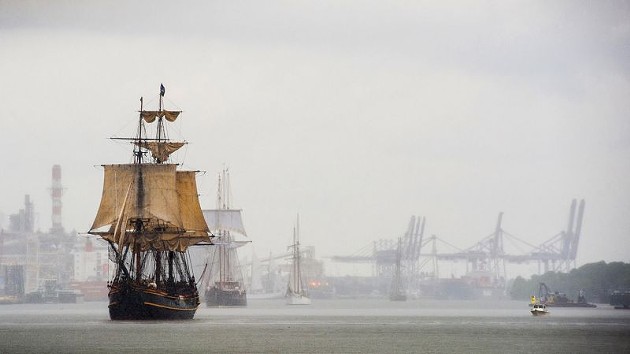 “The punchline is when this ship left Savannah, it went to Nova Scotia, and then Sandy came in,” Johnson explains.

“The captain, who I spent a whole day with, decided to swing around the storm and head south. He screwed up. That ship famously went down on CNN and he went down with the ship. He’s still missing to this day,” adding with a grin, “‘Then is now.’”

“That’s the only intact lighthouse compound on the east coast,” Johnson points out. “Not only the lighthouse, but the house in the foreground, that’s the captain’s house. The surrounding buildings are also part of the compound. They’re all original.”

Johnson loves the history of the Lowcountry and uses it to his advantage in shooting.

“I’m a bit of a history geek, which informs my professional work and the gigs I work on,” Johnson explains. “This region is so steeped in history in every way, and to bring that to my specific world, I’m from DC. I grew up around history museums, but history was behind glass and velvet rope. Here, history in this region, you can trip over it.”

Johnson began shooting when he was 16. In those days, the standard practice for photographers was to carry two separate cameras—one with black and white film and one with color. With the addition of filters and editing apps, that practice is long outdated.

“These days, of course, there’s no forethought required, no preplanning. You literally capture the image, and that’s all you have to worry about,” Johnson laments. “Traditional photography is all about before you made that image and as you were making it.”

“Then Is Now” features both black and white and color photography, and for “Dorchester Village Road,” he printed the photograph in both.

“Usually the image demands one or the other,” Johnson says, “but not this one.”

“Then Is Now” is presented by Sulfur Art Services, a project put on by Sulfur Studios. The team seeks local businesses in need of some art and artists in need of some publicity and fosters a relationship between the two. Sulfur then handles curation, installation, sales, and promotion of the resulting exhibition.

“This is the first I’m seeing of it,” Johnson notes as he looks at his art around In Vino Veritas. “They did a great job.”

Sulfur Art Services currently places artwork at Thinc Savannah, Starland Café, Bull Street Labs, Sentient Bean, and In Vino Veritas. If you can’t buy the art in person, Sulfur also posts the art on their website for purchase there.

The process is simplistic and beneficial for everyone involved in it, but it’s a service that is long overdue.

“It’s easier for artists,” Johnson says. “The running theme of Savannah is slowly getting the things they have in most cities. Jennifer and Emily and AJ do a great job.”

More »
More Art Beat of Savannah »
All Arts & Entertainment »
Comments (4)
Add a comment
Subscribe to this thread:
By Email