There's no one quite like Savannah native Haviland Stillwell 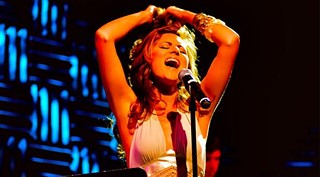 If you act, sing and dance, they call you a Triple Threat. I have no idea if Haviland Stillwell can dance, but she can certainly act, and she can really sing... she has a honey–dripping Southern accent, and anyway, she’s Haviland Stillwell.

Nobody else can claim that cool name.

So there you go. Triple Threat.

A native of Savannah who’s had two juicy roles in recent hit Broadway revivals (Fiddler on the Roof and Les Miserables) and has just released an eclectic pop/cabaret CD (How I Role), Stillwell is performing in concert Dec. 23 to benefit the restoration of the historic Tybee Theater.

It’s a house concert, at Mr. and Mrs. Spiva’s place on Paradise Island, at which Stillwell will be accompanied by pianist Steven Jamail on a cross–section of Broadway, cabaret and holiday songs. She’s calling the show I’ll Be Home For Christmas, because, well, she will be.

Her parents divorced when “Hav” was 9, and she moved with Cynthia, her mother, to Atlanta. Stillwell says she pretty much knew from an early age what she was going to do with her life.
And once she sets her mind to something, she gets it done.

She’s also a contributor to the California National Organization for Women site (canow.com), conducts musical theater master classes, and hosts an interview segment on broadwayworld.com. What she believes in most is the power of positive thinking.

Recently, Stillwell had parts in the TV movie The Client List (for which Jennifer Love Hewitt received a Golden Globe nomination) and the independent film Below the Beltway. She appeared in the TV series Eastwick and Six Degrees.

I understand you first appeared onstage as a student at Savannah Country Day School.

Haviland Stillwell: My first role was playing the title character in The Little Red Hen when I was in 1st grade! We were 7 years old. I had no idea at that point that I wanted to be an actress or anything. And then I really liked it! I was always artistic as a kid. Later, I started to really get into Bette Midler. And that really sealed the deal for me.

I suppose your mother’s involvement with show business must have had some effect on you?

Haviland Stillwell: She was the president of the Savannah Theatre when I was a small child. So she had always been involved in that way. When films started to come to Savannah, in the mid ‘80s, they hired her to do locations, and eventually to do casting. So she went sort of full–force into the film and television industry, and in Atlanta she really had the market cornered on casting in the Southeast. At that point, I was always on sets and all of that; even to this day, when I walk onto a set I sort of feel like it’s home.

Which came first, singing or acting?

Haviland Stillwell: Acting was first. I wasn’t really aware that I could sing, or that it was in me. I was actually really shy about singing, which is crazy to think about now – but that went away quickly. And when I started singing in any public forum, I realized that it all goes together.

I did about three years of work in Atlanta on the TV series I’ll Fly Away with Sam Waterston, and a lot of plays, so between acting and singing in the choir at school ... the vibrations in the room when you’re singing, it’s such a visceral experience that you go “Oh, this is what I’m supposed to do.”

Certainly it’s ambition, and drive, and all of that, but I also firmly believe that if we get really quiet, and we pay attention to instinct, we know exactly what we’re supposed to be doing. At any given moment.

Why did you go to NYU?

Haviland Stillwell: I was going to Ithica College because I wanted to study opera, classical training for my voice. After being there for two years I realized that wasn’t necessarily the right place for me. I wanted to train classically, but I also wanted to be able to do everything. I wanted to develop in all ways, and part of that was that I knew I was going to be in New York after graduation. So to get the ball rolling, I applied and auditioned at NYU, and started there as a third–year student. I have a bachelor’s in music, in vocal performance, with a concentration in musical theater.

What’s it feel like the first moment you step out onto the Broadway stage in front of an audience?

Haviland Stillwell: I cried really, really hard. Thankfully it was an appropriate moment in Fiddler on the Roof to cry! It was really outstanding. I was 22 years old, six months out of college, and it’s literally a dream come true. I’m standing on a stage with these outstanding actors, and it’s completely silent – there’s 1,700 people watching us. It’s like “Thank you, God.” I just felt so completely grateful for everything.

Two years ago, you just up and made the move to L.A. The great unknown: Wasn’t that a nerve–wracking thing?

Haviland Stillwell: It was and it wasn’t. I wasn’t moving an entire family or something like that; it was really just me and my person. Even now I still have a place in New York. Against my intuition; instead of analyzing it, it was really just a matter of “Just go. Just do it.” And thankfully my friend Craig Ramsay was ready to go at the same time, and he’s since become a big rock star in the fitness industry, and he’s the co–star on a TV show on Bravo. He’s remained one of my best friends out here.

What would you like to happen in the future?

Haviland Stillwell: I certainly am auditioning quite a lot for television and movies. I love the idea of being on a series, and being able to develop a character on an ongoing basis. That’s very attractive to me. That’s what I would really like to do, and when you do that obviously you can keep writing music, keep playing music, it doesn’t have to be one or the other. That’s the goal of 2011.

Why is this Tybee Theater benefit important to you?

Haviland Stillwell: I am, at my core, a Southern girl. And Tybee is very much a starting point for me. I always want to come back to Savannah; that’s where my roots are. I do a lot of volunteer and activism work, and I’m very specific, as I think we all should be, about who we want to spend our time and energy giving to. They asked me, and it was really a no–brainer.

I think Savannah audiences are really amazing, because there’s such an appreciation and excitement. And enthusiasm. That’s what you don’t always get in other places, because “We see this every night.” So that’s cool. And it’ll be fun.

‘An Evening With Haviland Stillwell’