About 38,000 early votes have already been cast in Chatham County by Dec. 31 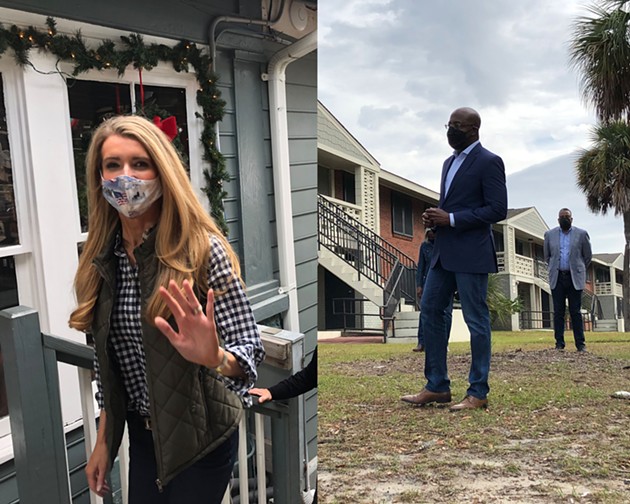 Nick Robertson/Connect Savannah
LEFT: Republican U.S. Senator Kelly Loeffler campaigns in Thunderbolt on Dec. 12. RIGHT: Democratic U.S. Senate candidate Rapahel Warnock visits his childhood home in Savannah on Dec. 18.
As the Jan. 5 runoff election for both of Georgia’s U.S. Senate seats draws near, candidates are repeatedly campaigning in Savannah amid a final drive to get out the vote. Democrat Raphael Warnock, a Savannah native, is challenging incumbent Republican Senator Kelly Loeffler, while Republican Senator David Perdue is defending his seat against Democrat Jon Ossoff. All four candidates in Georgia’s nationally prominent Senate runoffs – which will determine the balance of power in Washington D.C. for the next two years – have visited Chatham County in recent weeks. On Dec. 31, the Warnock campaign confirmed that he plans to appear with Democratic Vice-President-elect Kamala Harris during a drive-up rally in Savannah on Sunday, Jan. 3, along with Ossoff. Warnock and Ossoff also appeared together at a Dec. 19 rally in Garden City that featured acclaimed hip-hop artist Common. Meanwhile, both Loeffler and Perdue have been visiting Chatham recently, appearing together at a private fundraiser at the Forest City Gun Club on Dec. 12, before Loeffler joined three other sitting U.S. Senators for a campaign stop at Tubby’s Tank House in Thunderbolt that afternoon. Loeffler returned to Savannah to appear at a rally on Wednesday, Dec. 30. “Georgia has red clay, not blue clay,” Loeffler told supporters at the Dec. 30 rally to rebuff assertions that Georgia is turning into a Democratic-leaning state. “Are you ready to show America that Georgia is a red state?” During the last week of December, the Warnock campaign began airing an advertisement called “Son of Savannah” to emphasize his local roots, highlighting his upbringing in the Kayton Homes housing project and his graduating from Sol C. Johnson High School. The ad mentions that it’s been 150 years since a Savannah native was elected to the U.S. Senate.
click to enlarge 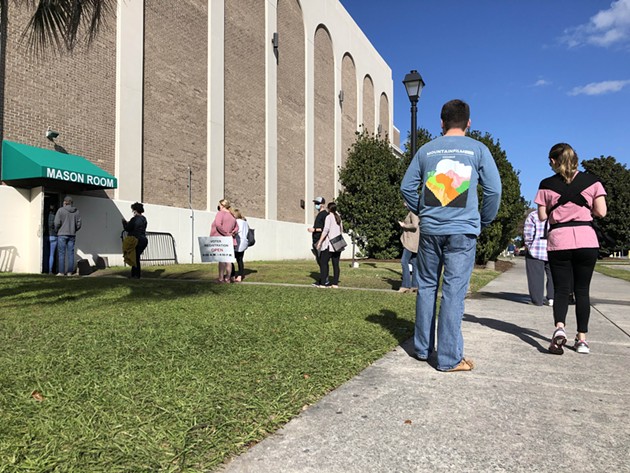 Nick Robertson/Connect Savannah
Early voters line up to cast their ballots at the Savannah Civic Center.
Early voting concludes in Chatham on Dec. 31, having yielded a significant number of ballots cast well before the Jan. 5 runoff-election day, according to Chatham County Election Supervisor Russell Bridges. As of the early afternoon of Dec. 31, 37,863 early votes were cast by Chatham residents, while 23,954 absentee ballots have been submitted, Bridges said. About 700 people have been hired to work at Chatham polling locations on Jan. 5, and while Bridges expects strong turnout on election day, he believes that poll workers will be well prepared to handle the volume of ballots cast. “We had a good turnout on election day. It didn’t tax the polls,” Bridges said, adding that COVID-19 precautions would be in place on Jan. 5 just like in all other elections during 2020. “We have put COVID methods into the polls, and now they’ve had several elections with that.” Bridges said that Chatham County election workers have performed heroically amid the trying circumstances of 2020, which saw Georgia’s primary elections postponed twice to June 9, and a higher-than-usual turnout for the Nov. 3 general election. Chatham also conducted multiple primary-runoff elections and recounts, including two recounts of the Nov. 3 results. “We’ve been on a steady treadmill the entire year,” Bridges said, adding that the county’s entire elections staff has performed admirably in their roles. “I have an extremely strong, very organized, very good team of people. … They have really carried the lion’s share of the work all year long.”