Southern Culture On The Skids return to Savannah 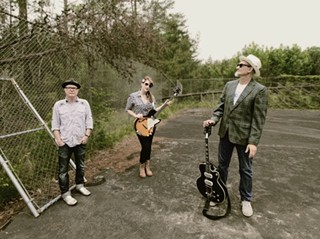 Southern Culture on the Skids returns to Savannah.

Southern Culture on the Skids, The Wooly Bushmen

Since the 1980s, Miller, Mary Huff, and Dave Hartman have kept audiences hungry for retro riffs, flying fried chicken, and dance parties galore with songs like “Eight Piece Box,” “Camel Walk,” and “Voodoo Cadillac” over the course of 16 albums. The band’s most recent LP, The Electric Pinecones, was inspired by an old country/psych side project of the same name.

Connect spoke with Miller after he and the gang inducted old friend Hasil Adkins into the West Virginia Music Hall of Fame alongside Patti Smith, Kate Pierson, Charlie McCoy, and Ann Magnuson.

How was West Virginia?

It was something else! They made a life-sized cutout of Hasil and put it onstage with us. It was a little bit nerve-racking to do the presentation—I’ve never done anything like that. But I did have a lot of old stories to tell. We did a lot of stuff with him, so it made it pretty easy. A lot of times, those things can just drag on and on and it get a little academic. But the stories about when he was on the road with us...they’re not academic at all!

We used to have him down to North Carolina to do Sleazefest with us and he’d stay with me, and we did some touring in the Southeast together. And he’d call me all the time. He’d call me from truck stops, and it was collect. Every time a truck would go by, you couldn’t hear anything. He was one of those guys who had to start the stories over, and those stories would go on and on! But it was always fun.

What do you make of Hall of Fame-type recognition?

I think the Rock & Roll Hall of Fame is kind of bogus. It’s more about money. There are a lot of great artists that aren’t in there, like Link Wray. You talk to Jimmy Page, The Who, anybody, they’ll tell you, “He’s got to be in there.” I’ve been there a couple times, it’s pretty mainstream.

But I like the West Virginia one because it was incredibly diverse. They inducted all kinds of stuff—old time music, and, of course, some bluegrass. They had Ann Magnuson from Bongwater and they had Patti Smith, because her husband, Fred “Sonic” Smith, was born in West Virginia, and her and two kids were there. It was funny, I hadn’t seen her son Jackson in so long! We toured with him, he was in a great Detroit band, The Paybacks. We did a few shows, hadn’t seen him in forever, and now he’s 30 something years old! He was a kid back then. They had some Christian guy, no idea who he was but he has lots of gold records [Note: It was Michael W. Smith]. It was kind of all over the place, but any Hall of Fame that would have Hasil is okay with me.

The Electric Pinecones wasn't out last time y'all were in Savannah—this will be the first time we're hearing those songs live.

We'll play a lot of songs there, that record went quite well for us. It got played a lot on the radio—well, the kind of radio that plays us—satellite radio, specialty shows, indie and community radio. It all adds up! We're on our second pressing of vinyl.

There's a lot of psych influence. Were you channeling your Electric Pinecones days?

Yeah! We used to open for ourselves as The Electric Pinecones because we couldn't afford to get an opening band. It's weird because it's more laidback—I wouldn't call it acoustic, but it wasn't really loud and hard. We would do everything from The Byrds or The Dillards to Buck Owens to The Seeds or Van Morrison, that kind of garage stuff with a little psychedelica and country. It's an extension of that for this one. We plugged in a little bit more, but it was really fun.

Are you working on anything new now?

We just finished re-recording some stuff we had on Geffen to take control of our catalog. It was a financial decision to redo Dirt Track Date and Plastic Seat Sweat. We can't sell it live...it's too expensive to buy the CDs and even do vinyl...a lot of the fans wanted it live, so we just re-recorded them. The same guy who cut those records came up here and did it in our studio. I think they're better than the original! Sometimes we get requests from indie films and people who don't have the biggest budget and sort of get lost when they go over to Geffen, don't hear back. So, if somebody says they want to use "Dance For Me" in a YouTube video or some sort of indie film, we can work with them.

It's such a strange place to be in, but I've heard of several bands re-recording their major label releases like that.

Yeah, I think Cracker did it. It's kind of funny...some record labels will give you your rights back, some won't. You re-record them, they're yours again.

What's going on over at [Miller's own Kudzu Ranch Recorders] the studio?

I'm working on John Howie's solo record, you may remember him from 2 Dollar Pistols, and we cut some tracks with a band called The GTVs, a soul/garage band with B3 and keyboards, stuff like that. That's all we had time for, we've been busy with those and re-recording ourselves.

And we’ve been writing songs—I can see this as being Electric Pinecones Volume 2! It’s so much fun, and it’s so fun to get out of the SCOTS mode and do some different material that’s been kicking around for a long time.