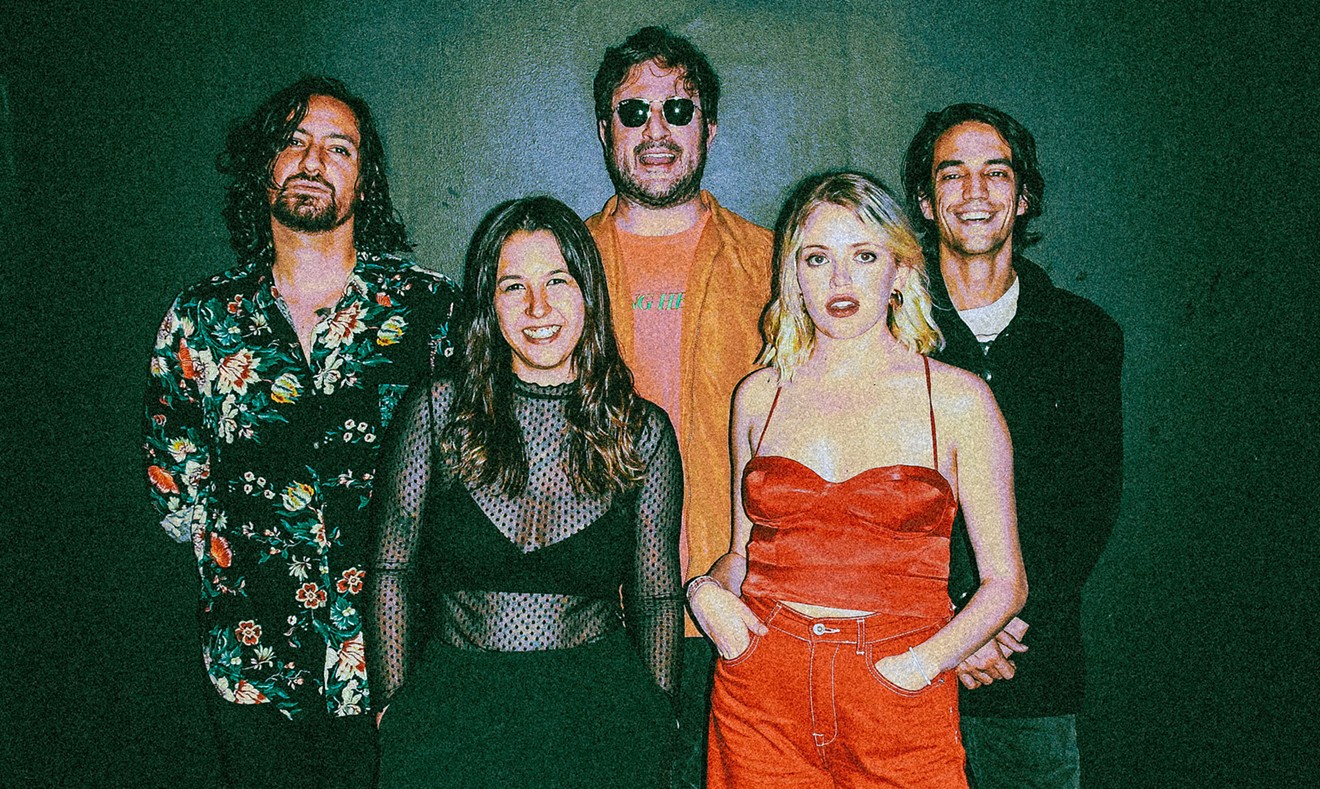 provided by the artists

It’s not all that unusual for bands to radically evolve their sound over time, but Mexico City’s Petite Amie have somehow managed to do that over the course of a single album.

Take the songs “Elektro” and “Adios.” If you were to hear both of them on a Spotify playlist, you’d never guess they were made by the same band.

The first combines ethereal female vocals, sung in French, with analog synthesizers that wouldn’t sound out of place in the chill-out room of a ’90s rave. “Adios,” by contrast, is an acoustic guitar-based ballad that’s more evocative of baroque pop and Brazilian Tropicália. The two tracks from the group’s eponymous debut album could hardly be more different.

“Yeah, it’s funny that they can both coexist on the same album,” Petite Amie vocalist Isabel Dosal said during a late-July interview. “If those two songs were people and they went to the same high school, they wouldn’t be friends. But putting together an album takes time, and you get to the point where you have one song that you recorded a year ago alongside another that you recorded last month. So, in a way, they don’t have much to do with each other. But of course, each song influences the next one, and it’s still the same artists who made them.”

Petite Amie started out in 2020 as a side-project for Carlos Medina, whose indie-rock band Little Jesus had gone from playing parties in Mexico City to recording for Sony Records and opening for the Rolling Stones. Together with Dosal and co-vocalist Aline Terrein, bassist Santiago Fernández and guitarist Jacobo Velázquez — most of whom take their turns on keyboards — Petite Amie proved to be a musical departure for everyone involved.“The moment you’re in a band, you have a lot of different tastes being put together and trying to make something,” said Dosal, who finds herself playing the role of “deejay” when the band is out on the road. “I think we really find common ground listening to The Beatles — every single one of us loves them — and also, you know, Pink Floyd. Kind of like the classics.

And as for the synth parts, our influences change a lot, depending on what we’re looking for. We really love the French band Air, and we’re also inspired by Kraftwerk and Unknown Mortal Orchestra. This is kind of the first time that most of us have gotten free rein over the way we use synths, and they kind of unlock a whole new world that makes everything very interesting.”

“Petite Amie,” which was released last October on Park the Van Records, is a meticulously crafted album that took nearly a year and a half to make. With no gigs to distract them, the musicians divided their time between recording in Medina’s home studio and going up on the roof to work on arrangements.

“The great part about that is that you kind of feel like you have all the time in the world to get your music to the point where you want it to be,” Dosal said. “You’re not paying for studio hours, where you have to be very efficient. So that’s given us the freedom to really explore our sound. We would spend days on vocals, days on a synth sound, days on a specific solo. And then there was Carlos’ growing collection of instruments. Every time that we were ready to make a new song, Carlos would be like, ‘I’ve got a new instrument! Look at this! Let’s make something!’”

Petite Amie’s eclectic approach to synth-pop happens to come at a time when artists and producers in Mexico City seem more willing to take more risks than most of their American counterparts.

“I wouldn’t say it’s going through a renaissance, because it’s something that has always been there,” said Dosal. “But it does seem like the industry here is opening up doors for new and different types of music. I mean, Mexico is such a big country, and Mexico City is huge and chaotic, so there are a lot of different things happening all at once. There are a lot of new rappers, for example. And there are feminist musicians like Rebeca Lane, who is awesome, kind of pouring their hearts out, especially if they’re angry at the world and at the government. As for pop music, or reggaeton, or regional music, you do have some formulas that need to be present in order to be part of those genres. But I think there’s this phenomenon where, maybe every 10 years or so, the industry kind of reshapes itself, and we have new faces popping up and doing something different.”

Meanwhile, Petite Amie are excited about taking their own music north of the border. “The pandemic gave us a lot of time to make music, but not a lot of time to play it,” Dosal said. “And that’s why we are so excited about our upcoming tour of the U.S. One of the things we wanted from the beginning was to be able to cross the border and play up there, and now it’s happening very quickly.”

The live shows will also give the band a chance to stretch out musically. “We like to take a song and try to reinvent it in a way that’s fun to play,” she said. “Because even though you’re onstage, you look around you and realize that you’re really only playing a song with your friends, and you can just kind of let go and let the music take you wherever it will.”