Two of Savannahs most dedicated educational groups come together this weekend to raise funds for a worthy cause.

The Society for Creative Anachronism (SCA) turns Oatland Island into an authentic medieval encampment this Saturday, culminating in a fundraising Middle Ages-style dinner inside the Oatland Island Educational Center that night.

Were really focused on the educational element, says Darren Newton, head of the local chapter, or shire, of the SCA.

Were not a fantasy or role-playing group, Newton says. We dont have anything against that, but our goal is to teach about history, and also to have a little fun.

As this reporter noted at a recent meeting, a little fun for SCA members largely entails wearing hot suits of armor and beating the crap out of each other with homemade weapons.

Newton admits that the SCAs boisterous brand of medieval-style combat is the groups biggest draw -- but not the only one.

The fighting is definitely the most visual thing we do. It really draws people in. But its by no stretch of the imagination the only thing we do, he says.

We do as much as we can to recreate the time period -- food, culture, music, dancing, brewing, games, Newton says, with a special emphasis and a raise of his eyebrows on brewing.

More about warriors than wizards, more about the Middle Ages than Middle Earth, the SCAs mission is to educate and entertain the public about medieval history in the most authentic and accurate way possible.

In other words, leave your Lord of the Rings merchandise at home.

A nationwide organization, SCA chapters meet often at tournaments, which not only feature fighting, but encampments, demonstrations, music, dancing and classes.

Its all about relaxing and just immersing yourself in another place and time, says member Patrice Meeker. You arent allowed to talk about work.

Each SCA member creates his or her own persona based on a certain place and time, from roughly the fall of Rome in 476 AD to the start of the Renaissance in the late 1400s.

(While a persona can be based on a real person, portraying an actual historical figure is not permitted.)

SCA members often do exhaustive genealogical and historical research to create these personae. While one would expect an inordinate number of kingly and dashing Sir Lancelot types, the diversity and creativity of their characters might surprise you.

A lot of people dont understand that the whole knight in shining armor stereotype was actually pretty limited in area, and from a much later period, says SCA member Rik Waters.

We encourage people to do a lot of research and think carefully before deciding on a persona, Newton says. A lot of people will want to be, say, a knight from 14th century Spain. Then they find out the armor and clothes they have to wear are just ungodly hot.

Waters portrays a sixth century Scottish earl named Artan MacDarach (Small bear, son of the oak in Gaelic). He often forgoes any shield at all in favor of a long two-handed sword -- actually a light, springy and wicked-hard rattan club -- or perhaps two swords wielded in tandem.

Waters says some SCA members push the envelope in search of unique personae.

Theres one guy that comes to the tournaments in full American Indian costume, he says. He has a shield with feathers, a huge mohawk, the works.

Because Vikings came into contact with Native Americans during an ill-fated attempt to colonize North America, the Indian brave was within SCA rules.

Waters says anything goes, as long as its a culture that would have had contact with medieval Europe in some way.

While SCA personae are made up, the combat isnt. Wearing various combinations of homemade leather, chain mail and plate armor, the combatants whack each other with their rattan swords so hard that the visors of their massive helmets sometimes bend under the force.

The fights are self-refereed, on the honor system, Waters says. If a fighter feels a solid blow to the head or upper body, he is honor-bound to acknowledge it by falling down as if he were killed. If struck on the leg, he must go to his knees and continue fighting from there.

Surprisingly -- or perhaps not surprisingly considering the amount of armor involved -- injuries are rare, and mostly self-inflicted.

Most of the injuries are pulled muscles, or hyper-extended shoulders and elbows from when somebody swings and misses, Newton says.

Waters mentions the painful phenomenon known as armor bite, when a fold of skin is caught between two plates of armor.

Not all SCA armor is metal. Newton wears forearm protectors made of boiled leather that seems harder than wood. Indeed, if matched against a real sword the leather could stop the blade cold, he says.

While fighting is all-out, SCA guidelines seek to level the playing field between combatants of different sizes.

Waters, aka Artan MacDarach, is a man of medium height but immense physical bulk. He says, The rules are designed so someone like me cant just use my strength. In real combat, I would swing my sword as hard as I could, and I could probably smash right through someones shield. But in SCA fighting style, power is less important than speed.

Some historically accurate fighting styles are prohibited in the interest of safety. For example, bashing someone in the face with the pommel of the sword -- the bottom of the grip -- is a no-no, even though it was a common striking technique in medieval times.

Likewise, kicking, pushing and wrestling are not permitted.

Waters laughs when he describes a man who is commonly considered one of the best SCA fighters in existence.

Hes about five foot one and like, 55 years old. Hell put on his armor and talk about what an old man he is and how bad he feels that day, Waters says.

SCA fighting is not limited to men.

Weve seen some awesome women fighters at tournaments, Waters says. I mean some of them are scary.

Indeed, while sweaty hand-to-hand combat followed by quaffing hearty homebrewed ale would seem to make the SCA a most macho organization, the women of SCA have plenty to entertain them as well.

I like acting like a lady and being treated as one, says Patrice Meeker, who portrays Patrice d Arlie, a seamstress to the Ogilvie family of Scotland.

I really enjoy the chivalry. Ladies are not allowed to go anywhere unescorted, she says.

Meeker adds that with 1,000 years of fashion history to choose from, female SCA members can completely indulge themselves in that age-old feminine pasttime: dressing up in fine, beautiful clothes.

While SCA women do their share of embroidery, cooking, stained glass, herb growing, dancing and flute and recorder practice, Meeker says theyre not all totally girly-girls.

Im a huge NFL fan, so I really enjoy watching the guys fight, she says.

When SCA comes together, they generally do so in overnight encampments. But SCA camping has as much to do with regular camping as a Motel 6 does with the Ritz Carlton.

While the children dont fight, they are an important part of SCA events.

Oh, theyre usually the best ones at getting into the spirit of things -- they have such lively imaginations, she says.

There are always childrens activities at our events, like storytelling, Save the Maiden, and even childrens jousting. They try to get the tip of their spear through some rings.

Some of those childrens activities will be on hand at Saturdays day-long event at Oatland Island.

So what brought these ardent history and combat buffs together to help Oatland Island Educational Center?

According to Serena Nasworthy, chairman of the support organization Friends of Oatland (FOO), it was serendipity.

Some of us started saying, wouldnt it be great if we could do an entire medieval festival next time, Nasworthy says. Then somebody else said, Well, there's this group of people that reenacts medieval times.

Nasworthy says When we got hooked up with SCA, the whole thing just started to expand. The event went from being just a feast to an entire day-long festival. We didnt set out to make this as big as it has turned out to be.

Because of SCAs dedication, she says, FOO has been able to let the group take the lead in organizing the fundraising festival.

I was astounded. I had not a clue that this group existed and was as well-defined as it is, and the lengths they go to in order to make things authentic, she says.

They provide all their expertise, and they already have so many props. For us it was more a matter of providing them a place.

Nasworthy says funds raised at both events this Saturday will comprise the matching funds required by a grant Oatland Island has secured to repair a dock at the facility.

And for next years event, FOO will continue to go medieval on your butt.

What we hope for is that this will become a signature event for the whole city -- something that will grow over time, Nasworthy says. The truth is that there is an endless list of needs for Oatland Island. w

The Medieval Festival will be held this Saturday, Sept. 25, from 10 a.m. to 4 p.m. at Oatland Island Educational Center. Fighting, food, vendors and childrens activities will abound. Admission is $5. The event is sponsored by Friends of Oatland, Connect Savannah, Gulfstream, Comcast and the Society for Creative Anachronism.

The Beastly Feast dinner, a medieval repast served in several courses, or removes, will be held from 5-8 p.m. Saturday at Oatland Island. Tickets are $25 per person for the dinner. Reservations are required in advance. Call 898-3980. 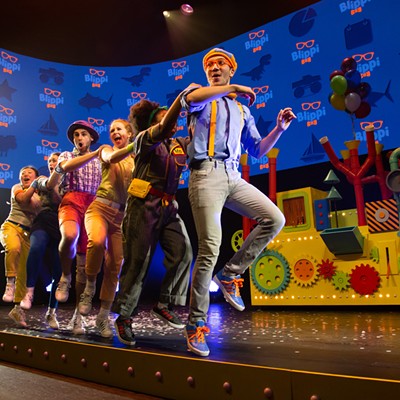