As the co-founder of What’s Left — a political music zine, indie label, and newly opened record shop in Colorado Springs — he feels the annual “celebration of the culture of the independently owned record store” is becoming less about small stores and more about big record companies. And from a DIY musician’s perspective, he’s seen the major labels flooding vinyl pressing plants with special releases, while independent artists who just want to press a few hundred records are being left out in the cold.

But Ostrow is also an enthusiastic vinyl collector with an undying devotion to punk, metal and hip-hop. So it’s inevitable that several Record Store Day exclusives will find their way into his collection each year. 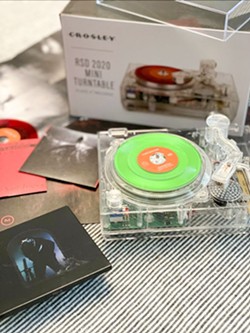 “Collecting physical music is so important,” said Ostrow. “Listening to a full album the way it was meant to be played, pulling out the liner notes and reading along as you listen, it’s an important art that has been going away for a while now.”

When it comes to this year’s Record Store Day offerings, Ostrow’s personal must-haves include exclusive releases by the warped prog-rockers Primus, hip-hop crooners Bone Thugs-n-Harmony, and doom-metal band Graves at Sea. “I will definitely try and get some of these in the store,” he said. “I’ve heard it’s harder for small shops to get the releases, but I’ll have to find out for myself.”

It’s not all that surprising that Record Store Day, now in its 12th year, has changed so dramatically. The event was originally conceived as a brick-and-mortar record store equivalent to Free Comic Book Day, except without the free part. A decade later, it had grown into an international enterprise that, in 2018, yielded 733,000 vinyl album sales in a single week.

This year’s Record Store Day was originally scheduled for mid-April and then rescheduled for mid-June. When that didn’t work out, organizers decided to make up for lost time by expanding it to three days: Aug. 29, Sept. 26 and Oct. 24.

As in years past, this year’s hundreds of releases span a wide range of musical eras, genres and formats. And yes, there will be some cringe-worthy offerings to prove Ostrow’s point, as evidenced by the headline to this press release: “RECORD STORE DAY PARTNERS WITH URBAN OUTFITTERS ON A VERY-LIMITED EDITION RSD2020 MINI-TURNTABLE WITH 3” POST MALONE COLORED VINYL BUNDLES.”

And this accompanying quote from Record Store Day co-founder Michael Kurtz: “Working with Urban Outfitters is a natural for Record Store Day as they have been an important driver in turning younger music fans on to the joys of vinyl and record collecting. It’s exciting to finally get to work with them on a project that celebrates the music of one of today’s biggest artists.”

Yes, nothing embodies the DIY spirit quite like Urban Outfitters.

That said, there’s still plenty to recommend on this year’s list, which you can find at recordstoreday.com.

One of the best is an eye-catching vinyl picture-disc of TLC’s “Waterfalls.” Originally released 25 years ago, it’s the trio’s most perfect single, a gorgeous R&B ballad with hooks and production that can stand up to Prince’s best. It was also the first No. 1 single to reference AIDS. The six-track EP includes rare remixes by Organized Noize and Dallas Austin, as well as Japanese-inspired caricatures that would look every bit as good on your wall as your turntable.

As for hip-hop, this year’s winner is undoubtedly “The Notorious B.I.G.: It Was All a Dream (1994-1999).” The 9-LP box set features digitally remastered versions of his entire catalog pressed onto clear vinyl.

Of course, the one big question mark remaining is what exactly the Record Store Day shopping experience will look like this year. Organizers are promising to follow the guidance of government experts and scientists in order to make the event as socially responsible as possible.

That could involve socially distanced crate digging, curbside pickup, local delivery, or some combination of the three. The goal, they say, is to give the largest number of stores a chance to participate in the strangest Record Store Day ever.