Getting there from here: Parade day transportation in a nutshell

Savannah Metro Police and the City are running a real-time map of road closures and openings during the festival, which will refresh every minute.

A LOT of people drive downtown to try and park as closely as possible to the festivities. Good luck with that. Here is some practical advice on how to get downtown and out in one piece, with as little actual driving/parking as possible.

Savannah Metro Police and the City are running a real-time map of road closures and openings during the festival, which will refresh every minute. It’s really cool, it works, and you can find it here: http://scmpd.org/stpatsparade/

Get on the bus

SO YOU'RE thinking: Wouldn't it be awesome not to have to drive into downtown to see the parade?

Yes. Yes it would be so awesome.

That’s why Chatham Area Transit (CAT) will provide a $5 round–trip park ‘n’ ride St. Patrick’s Day shuttle March 17. The shuttles leave for downtown 7-11am and run return trips 11am-4pm to and from these locations:

• Westside at the Westside Shopping Center on Hwy 80 in Garden City, dropping off at Transit Center on Oglethorpe and MLK.

• Eastside at the Island Towne Centre on Whitemarsh Island, dropping off at Oglethorpe and Houston.

• Southside at the Savannah Mall at Abercorn and Apache, dropping off at Transit Center on Oglethorpe and MLK.

Anyone taking a shuttle downtown who does not want to return on the afternoon shuttle can use the CAT wristband to ride the regular routes.

Purchase of a parade shuttle wristband entitles you to return on the parade shuttle or any regular route on Thursday. Catch a CAT from the Transit Center or from other regularly marked bus stops not affected by the parade reroutes.

To Savannah Mall – 14 Abercorn Local, or take numerous other routes to the Oglethorpe Mall and then transfer

The fare-free dot shuttle service will be suspended.

Get on your bike

DON'T forget about the option to just ride your bikes into town! It's so easy that a lot of people forget to think about it.

The main bike paths north into downtown are on Lincoln Street (northbound traffic only) and Habersham Street.

Lincoln Street is a fairly heavily trafficked route on Parade Day morning, so keep your head on a swivel, both for other bicyclists as well as motorists.

Note: The Lincoln Street bike path is unusual in that the lane is on the left side of this one-way, northbound road.

The main bike path south out of downtown after the festivities is on Price Street (southbound traffic only). This is a more standard bike path than Lincoln Street, but you should still keep aware that not all auto drivers realize it’s there, especially when they want to turn right and think it’s a turn lane.

Keep in mind Washington Avenue is a well-designed east/west corridor to use to get to the aforementioned north/south routes.

Our good friends at the Savannah Bicycle Campaign also offer this sage advice:

“If you are planning to ride your bike on the big day, make sure to bring lights, in case you stay out later than you thought you would, and your lock to protect your bike from mischief. And, of course, wear a helmet and stay alert for impaired, distracted and aggressive drivers.”

THE Savannah International Trade & Convention Center across the river on Hutchinson Island offers another option.

For those parking on Hutchinson, there is the fare-free Savannah Belles Ferry to bring you directly to River Street. There will be a complimentary shuttle to Indian & Fahm at the west end of River Street.

City Hall Landing will not be in service Thursday-Saturday. From 7am on Thursday, March 17 until midnight, Saturday, March 19, ALL ferry service will go from Trade Center Landing to Waving Girl Landing (by the Marriott).

Thursday, March 17: Ferry hours 7am– Midnight between Trade Center Landing and Waving Girl Landing ONLY. Free shuttle between the Trade Center and Indian & Fahm, Noon – 1am

Friday-Saturday, March 18-19: Ferry hours 7am– Midnight between Trade Center Landing and Waving Girl Landing ONLY. Free shuttle between the Trade Center and Indian & Fahm, 7pm– 3am

Parking on Hutchinson is $20 per day and is as follows:

What about the actual parade?

The “official” viewing area for dignitaries and such is on Abercorn near Lafayette Square. Lafayette Square is itself one of the more popular places to watch the parade, and is one of the places where the bands perform their best in order to show their stuff for the TV cameras.

Just don’t think about camping out in any of the squares the night before. You can’t set up your party station in parks and squares until 6 a.m. Thursday.

The only furniture allowed in squares are tables, coolers, lawn chairs and 10-by-10-foot tents.

NO grills, amplified sound, kegs, advertisements, barriers, or personal bartenders. All your stuff has to be out of the square by 6 p.m. Thursday.

The use of City electricity and water is prohibited.

Hey, the parade is going the wrong way around the squares. What is this, some kinda weird socialist Bernie Sanders type deal?

IN AN interesting twist, this marks the second year that the Savannah St. Patrick's Day Parade will go the "wrong" way around all six downtown squares it negotiates on its route.

The stated reason is for crowd control and safety, to make things easier for any emergency vehicles and also so that festivalgoers won’t be as tempted to cross the parade route to make their way to the many City-installed Porta-Potties. 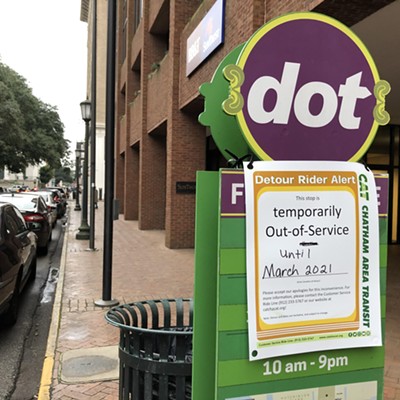