Getting weird with Camden Noir

Tattoo artist branches out with art show at Sulfur Studios

"I'd Burn Alive to Keep You Warm" opens Thursday, Jan. 19 at 6 p.m. at Sulfur Studios. The show runs through Saturday, Jan. 21. For more on Camden, visit his website at camdenoir.com.

CAMDEN NOIR has only been in Savannah for about five months, but he’s already making big moves in the art scene.

The Syracuse native opens his first solo show, “I’d Burn Alive to Keep You Warm,” at Sulfur Studios this weekend.

“It’s literally a compendium of all of the work I’ve done and never sold, so it’s stuff from 15 years ago and stuff from last week,” Noir says.

Currently a tattoo artist at Black Orchid, Noir’s tattoo apprenticeship taught him to look at art differently and go beyond what’s expected.

“I had to draw a skull, a rose and a word a day,” Noir explains. “The dude who taught me how to tattoo would yell at me. He was like, ‘Why are you still doing human skulls? Why don’t you do a bird skull, a rabbit skull?’ I was literally doing what he was asking me and nothing more, but he wanted me to push it. Once I had that, I was like, ah. Even in my paintings I was like, let’s see where I can push this. Let’s get weird.”

That’s just what Noir does in “Queen of the Rats,” a skull adorned with a white and pink headdress. At first, they look like flowers, but those are actually rat tails hanging from the skull’s head.

“Every painting I try to incorporate some juxtaposition, usually something alive and something dead,” Noir explains.

“Queen of the Rats” is done on plywood with palette knives, creating a textured and chunky style.

“Canvas is cool, but I paint real harsh,” he explains. “Painting harsh gives it texture on a lot of it, and then if you’re heavy-handed you have a tendency of not keeping it super tight, and you don’t have as much control.”

The looser approach is a welcome change from tattooing, where the line work has to be tight and precise. 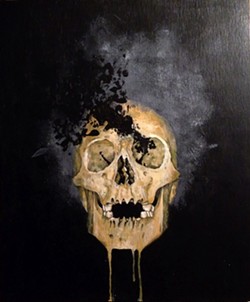 Noir is also the author of the Label 228 Project, a collection of street art on mailing labels. To date, there are over 1,500 labels from artists all around the world, and the book is available for purchase on Amazon.

Noir’s foray into street art came back in Syracuse, when a building owner asked him to paint the side of his building. The man wanted something uplifting, but all of Noir’s suggestions—a bouquet of roses coming out of a trash can, a sinking ship emblazoned with the words “Whatever”—were too abstract for him.

“I feel like the viewer should always ask why. Why did you do it like that? If your painting is there and they’re not questioning anything, it’s just like a landscape. It’s beautiful, but it’s a landscape,” he muses.

Street art is clearly one of Noir’s biggest influences—another piece in the collection is a painting of a field with “No One Cares” painted over the glass. Noir bought the original artwork from a friend of a friend and, inspired by Banksy, painted lettering over the glass.

“There’s one by Banksy where he found a painting at a thrift store, an open field, and he painted a KKK member hanging from a tree,” Noir explains. “I thought that was cool, taking it and reinterpreting it, but I don’t want to take someone’s thing.”

Over 40 pieces will be included in Noir’s show, an impressive body of work for a solo show, even for a career-spanning 15 years. They’ll all be for sale, along with prints of the works, but Noir isn’t particularly hopeful for sales.

“As long as I get one tattoo out of it,” he laughs.