Geekend takes place April 26 and 27 at the Savannah Cultural Arts Center and the Jepson Center for the Arts. Visit geek-end.com for more information and for a complete schedule. To learn mor eabout Girls Who Code Savannah, visit girlswhocodesavannah.com.

GIRLS WHO CODE is a nonprofit organization that hopes to increase the number of women in computer science. Founded by Reshma Saujani in 2012, the group has chapters all around the world, including one here in Savannah.

Co-founded by computer science teacher Alicia Beck and her former student Sage Batchelor, Girls Who Code Savannah will be at Geekend this Friday and Saturday at the Jepson Center.

Batchelor became interested in computer science thanks to her mom, Sari Gilbert, a game design teacher at SCAD.

“My brother is three years older than me, so she got a tutor for my brother and I was like, ‘Hey, can I join in on your coding thing?’” remembers Batchelor, an eighth grade student at The STEM Academy. “I did, and I really loved it, so I stuck with it.” 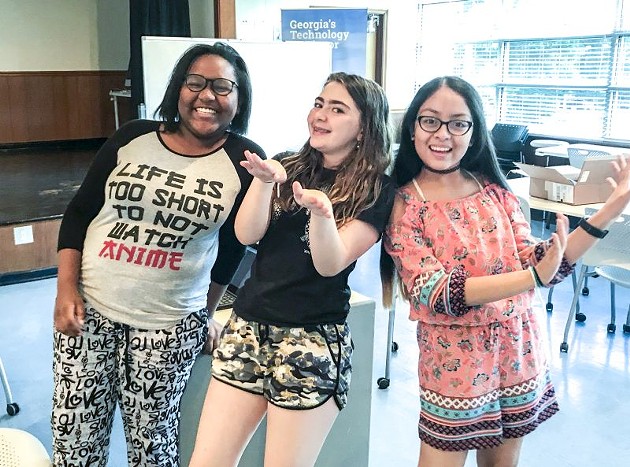 Girls Who Code Savannah members, with co-founder Sage Batchelor in the middle.

Batchelor and Beck decided to create a Girls Who Code club in Savannah because getting girls involved in computer science is incredibly important.

“It’s a very low percentage of all computer programmers that is female, and raising that percentage can help with diversity in the workplace,” says Batchelor. “When you’re doing user testing, if you’re testing with someone who is very close to you, you’re going to have the same ideals, so it can be harder for it to actually be more diverse. That’s an issue in face ID—it didn’t recognize some people’s faces because the workplace they tested in didn’t have those people.”

“That’s fascinating and dangerous when you consider they use facial recognition to charge people in criminal cases,” adds Beck. “That’s called algorithmic bias. We talk a lot about that and the lack of diversity in computer science leading to more algorithmic bias.”

Beck also talks about the gradual decline of girls’ interest in computer science.

“Starting in middle school, the interest in computer science from girls starts to wane, and that continues and continues, “says Beck. “You can see the growth chart all the way through high school. Fewer girls take the AP Computer Science exam by a lot, and it decreases even more as they go into college.”

Girls Who Code Savannah is open to all girls in the area.

“We don’t consider this a STEM [Academy] program,” explains Beck. “We really love being at Bull Street Labs because it’s great and it’s a neutral zone. The goal was we definitely want to pull girls from every school in the district.”

Girls Who Code Savannah offers two sessions of summer camp. It’s open to girls in rising grades 6-8 and is completely free thanks to generous support from a Downtown Neighborhood Association grant and a Comcast scholarship.

The camp officially came about last summer as a sort of test-run.

“We thought about it towards the spring, and it was a little too late to try to start one for the school year, so we decided to kick it off and get our feet wet with a camp,” Beck remembers. “So we did a camp and a fall session after that.”

The sessions are a big hit with around 40 girls involved.

“It’s taking off—it gets better and better in each iteration of it,” says Beck.

This summer, there are two different sessions available: a four-day camp from May 28-31 and a five-day camp from June 3-7. There’s room for up to 15 girls in each session, and registration ends when all the spots are filled.

“It can go up to the day of the camp,” remembers Batchelor. “Last year we had some people just walk in.”

The camp is designed to be fun and geared towards all the girls’ interests.

“We don’t want [the girls] to feel like they have to follow the curriculum like they’re in school, so we give them a few options of what they can choose,” explains Batchelor. “Last year we had two groups build games. One was a fashion game and one was an outer space game. Another group built a website, which I don’t think they realized how hard it is to learn HTML, but they had some type of website by the end of it.”

“We want them to see all the facets,” adds Beck. “We’re looking at incorporating coding and dance to it—that always interests people.”

Girls Who Code Savannah are also branching out beyond the camps to show people what the club’s all about without signing up for a summer camp.

Being at Bull Street Labs is advantageous for the girls because it puts them around people in the field.

“It’s a really neat environment because they’re getting to brush elbows with people who already have careers in this,” says Beck. “When we’re there, the kids get to talk to the people around them and see what they’re doing, even in a larger context. We do it to show a wide variety of what you can do with computer science.”