Give the Woman A Hand

Attendees at ‘The Artist's Hand' at The Soda Shop gallery enjoy the various interpretive images of Robyn Reeder at the unique collaborative show dedicated to her life and activism.

Decent, affordable materials and a supportive community go a long way, too.

When you’re a person who provides all that to struggling artists, you can pretty much expect to be worshipped.

Robyn Reeder probably didn’t intend to become a Savannah icon. But how could she help it? As the proprietor of Primary Art Supply and Civvies New & Recycled Clothing on Broughton Street, she’s styled out studios and closets at reasonable prices for years.

She’s the toast of the underground for hosting legendary customer appreciation parties at her stores and the occasional metal band in her living room. She thunders down beats as the drummer for the bands Hot Pink Interior and When Hipsters Attack!

She’s championed all manner of individual and group projects and serves on the board of the Downtown Business Association.

Earlier this year when muralist and avid Primary shopper Jose Ray decided to gather eight other fellow Savannah artists for a concept show that involved different interpretations of one image, he chose a portrait of Reeder as the template.

“It seemed fitting since she’s participated in so many other people’s artistic careers,” says Ray. “Her presence has given so much to this community.”

The vibrant result is “The Artist’s Hand: A Show of Appreciation for Robyn Reeder,” at The Soda Shop at 409 E. Liberty St. through Dec. 6.

Ray says using Robin’s image is a way to offer gratitude as well as to illustrate the notion of how collaboration breeds countless possibilities. After all nine portraits were completed, Ray cut each one into nine squares that could be lifted off the wall and moved around, allowing for more than three hundred million different embodiments of the originals.

Anyone who follows the Savannah art scene might find this a dizzying prospect: A spiraled purple cheek decorated by Matt Hebermehl on the same grid as Panhandle Slim’s Ziggy Stardust–inspired forehead, opposite a square of DRZ’s acid green chin? Mind–blowing.

Throw in works by Ray, Andrew Brodhead, Adolfo Hernandez, Rachael Perisho, Zteven and RAABstract, and you’re playing with some of urban Savannah’s most creative and colorful minds.

The show’s dimensions are enhanced by the artists’ relationships with Reeder, which range from customers to admirers to close friends. As each portrait is released into its nine pieces and connects and mingles with other artists’ work, it is further demonstration how small movements between people build on each other to become a community.

And what a community it is. The show’s opening last Saturday was a star–studded affair, drawing the city’s counter–culture movers and shakers to the Soda Shop, Rachel Raab’s stunning new studio gallery. As painters, sculptors, musicians, filmmakers and aficionados spent hours rearranging the squares, conversation centered on Reeder. The words that kept coming up were “supportive” and “risk taker.”

“She’s someone who walks the walk,” said Hebermehl. “That’s rare.”

Printer/musician/art lover Timmy Welter called the show “very well–deserved” and the event itself typical of Reeder’s way of magnetizing creative people. “That’s the effect that Robyn has.”

“The artwork reflects Robyn’s many styles,” continued Welter. “One day she’s dressed up all punk rock and the next she’s Fifth Avenue, dressed to the nines.”

The woman herself was in attendance, wrapped in a vintage black coat and topped by a glossy fur hat, an ensemble evoking echoes of Grace Kelly. Her eyes bright and her smile ready, only a slight paleness in her face betrayed the challenges she’s faced living with cancer for the last seven years.

Reeder may not be completely comfortable with the adulation, but is learning to accept it.

“If I wasn’t sick, seeing my big head everywhere would have freaked me out,” she laughed. “But I feel so humbled. It makes me feel good that people are appreciative.”

Diagnosed with breast cancer at 29, Reeder survived surgery and chemotherapy only to have the cancer resurface in her bones, lungs and spine in 2007. Fighting for her life with an arsenal of medical treatments, a macrobiotic diet and a nourishing spiritual practice, she is frank about her own mortality.

Though she handed over daily details of her businesses to her mother and sister last spring, Robyn continues to schedule new music gigs, collaborate on a documentary about her healing, pursue her own metalwork and plan trips with her husband, musician Igor Fiksman.

Nodding in approval of the Warhol–esque presentations of herself, Reeder moved through the new studio, hugging friends, discussing new ideas, not wanting to waste a minute.

As the many people she’s touched will attest, it’s unlikely she ever has.

The Artist’s Hand: A Show of Appreciation for Robyn Reeder

The Silver Machine is still in motion 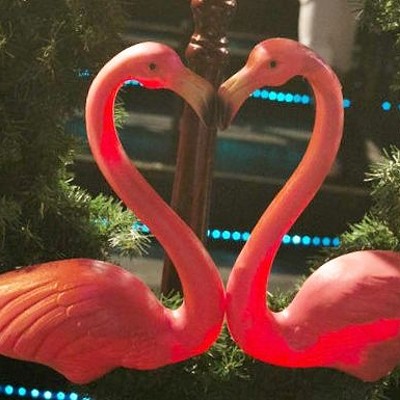 Dress up for success at Civvies