For these local women, rebooting during the pandemic involves crosscountry adventure 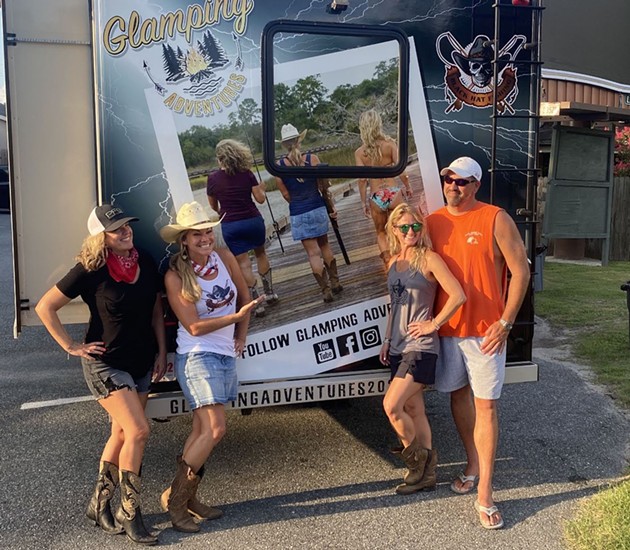 WHEN THE COVID-19 pandemic forced closures across the hospitality industry, Chris Waters saw her job as a Savannah event planner disappear.

“My calendar went from completely booked to everything cancelled in an instant,” she recalls.

She was also struggling with the new norm of empty nesting, her children Victoria, 24, and Will, 21 recently moving out of the house. Chris decided to take her time off as a reboot, a time to reset her goals and pay attention to herself.

Her friends Nicole Casino and Arra Riggs had planned to join her on a trip to Italy, but travel was cancelled as well. Instead, they decided on a different kind of adventure, an RV drive around the United States.

Chris attributes the speed that their trip was put together to her friend Nicole. “I always wanted to go out West. Next thing I know there’s an RV purchased and a Facebook page. We call Nicole ‘Turbo’ for a reason.” 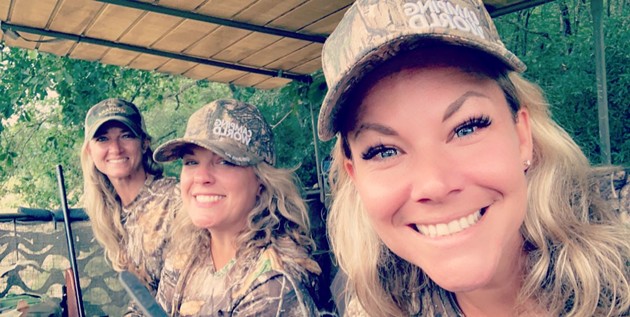 All three women are single and love active adventures. Though they’ve traveled together before, this trip seemed intimidating and the RV a mystery.

Nicole wanted to support her friend, and thought social media might become an environment that could help other women as well.

“There are probably so many other women who don’t go on adventures because they’re nervous. We decided to show other people that we are trying and we’re learning and figuring it out and that they could too.”

Followers of the Facebook, YouTube and Instagram account have watched as the group bought the RV in Myrtle Beach - and when the ‘check engine’ light came on that night at the very first campground.

They brought it back to Savannah and had it fixed, taking a quick trip to CreekFire RV Resort & Campground for a test run. The light came on again, and they had it fixed.

Finally after the third attempt, it was settled that it was just a faulty sensor, but it bothered them when they drove. So instead of continuing to fight against the warning, they put a sticker over it, with a motto, “You can do it.” Now, the light doesn’t bother them.

When it came time to start on their big trip, the three friends swung through the Savannah Airport to pick up Nicole’s friend Tammy Gibson who flew in to join them from Portland.

They left at 7:30 at night, able to make it to a truck stop in Alabama as their first stop, their 31-foot Winnebago sandwiched in between huge semi trucks. 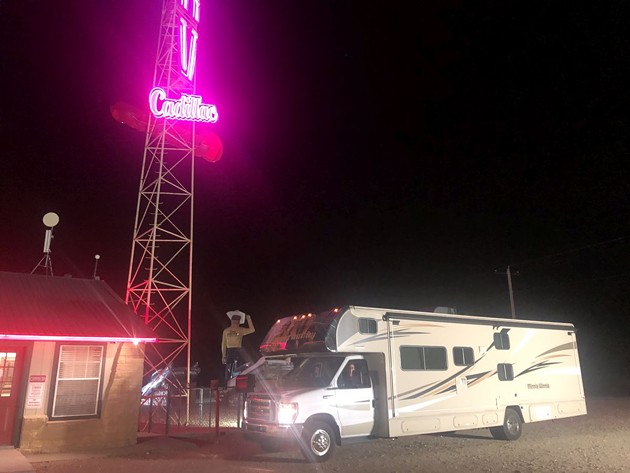 The next day, they traveled to the Ozarks for trout fishing and then to the Cadillac Ranch in Amarillo, Texas. Everyone in the group had input in the schedule.

Nicole explained, “some of us prefer to wing it and some like to plan exact routes. We all had a different idea of what we wanted to do and we brainstormed the best stops to go for each thing. Now we are making the loop.”

Plans have included yoga at Red Rocks in Boulder, Colorado and touring a CBD/Hemp farm. Plans are in place to visit a cattle ranch, go fly fishing, bowhunting and take a white water rafting excursion.

They also plan on going on a blind date in Colorado, the Facebook group polled on the best candidate for Chris to pick for a night out on the town.

The trip hasn’t been all fun and games. When traveling into New Mexico, they ignored emails and warnings on the campground’s website. It told travelers to follow written directions rather than a GPS, cautioning that technology would send them straight up the highest part of the mountain on a one-lane, winding road.

Arra started off driving, but then traded with Nicole, stressed by the cars flying down the mountain without any regard of the danger. Nicole, true to her nickname, put the pedal down and made it to the other side.

When they arrived, the campground was out of toilet paper and all the stores were closed, but there were families enjoying the natural area and river rafting nearby. No one seemed to mind.

The women feel safe about their travel. The people they’ve encountered on the road have been helpful and friendly, allowing them to ask questions about RV hookup problems or the area they are visiting.

They are able to have their own food, sleep on their own sheets and stay away from others, often finding that campgrounds prefer to have touchless check-in, working over the phone and taping receipts outside of the door.

They have rules for their travel together that sound like their mantra for life. First, there is no complaining. It’s a requirement to always be sexy. To respect each other, they should always be ready with what they’ve promised to bring and be on time. And finally, always bring snacks.

When asked about future plans, they readily admit that this adventure won’t be the last. Nicole puts it simply, “We like to have fun all the time.”