NASHVILLE-BASED group God Bless Relative is off to a great start in the last few years since they formed. Their most recent LP, You Will Receive Favor | I Will Return, has garnered acclaim for its roomy, organic production and gorgeous melodies.

The band effortlessly rides the line between the adventurousness of Wilco and the rich emotional depth of Sun Kil Moon, and it’s thanks in large part to leader and songwriter Blake Tallent.

Ahead of the band’s show at El Rocko Lounge on Dec. 15, we spoke to Tallent about how he got his start and what it’s like being an anxiety-ridden artist in today’s uncertain world.

How did this project take shape? I can hear the Wilco influence prominently, but there are also elements of bands like Pinegrove and Sun Kil Moon.

BT: You nailed a lot of that, man. We love all those bands. Primarily Wilco - what a gift Jeff Tweedy is. I think we draw so much influence from that that we have to be careful to not rip them off [laughs]. I think that when I was writing the record in particular, I was listening to a lot of this artist Carter Tanton. He's a Boston guy, and his record Freeclouds is so cool. He has this sense for using electronic music in an indie-folk way, which I always appreciate.

That record was a big game-changer. A lot of the latest stuff from John Moreland, too. These kinds of records really informed the way we made the record and the record we’re working on now.

You did the record in Chicago, right? Tell me about that. How did that atmosphere influence the songs and the sonics of the record?

BT: We made the decision to go to Chicago because our buddy Kiko Negron, who produces a lot of our stuff, was living there at the time. He had this in with a place called Orland Studios. It's basically a privately-owned studio that was this guy's old pool house. He converted it into this live tracking room - it was pretty cool.

The control room is like SSL world with, like, a Studer. We figured that since the tape machine was there, we might as well do it to tape.

So it’s all analog to tape?

BT: Yeah, man. As few overdubs as possible was the motto. We were really fortunate to get to do that. Not that it really makes a difference in what makes a record great, but it was something we always wanted to do.

I think that it does make a difference, just in the sense that you don't really get a billion do-overs. There's something to the energy of that urgency. I can hear that in the record, honestly.

BT: Thanks, man. That's what we were hoping to achieve. The only other reason we decided to go up there was because of Wilco. I mean, Chicago is Wilco. It was like holy ground for us, so we said, "We have to do a record in Chicago and make it work."

How much of the record was pre-production based?

BT: We didn't really spend any time on pre-pro. What's interesting about our band is that none of us live in the same place. So we're kind of file sharers, in that regard. I live in Nashville, Dustin lives in Savannah, and a few other guys that lay with us live in Pensacola. So I'll make a demo and send it to the guys. That was how we did this last record, so it was very no pressure in the sense of approaching it from a relaxed place.

Do you think there's an upside to being in a geographically scattered band? Do you think it helps with focus and organizing things? Is it easier to just make everything you do a little more calculated?

BT: There's definitely that whole thing, but there's also the fact that you're not living with the guys and pissed off when they don't do the dishes. Over the years of being in and out of bands, I've found that operating a band in that way just works in the most healthy sense for me. It was just something we started trying and it worked super well.

BT: It's hard to be an artistic person when you're supposed to be at venues shaking hands and hanging out with people. What makes it difficult is that we live in a country where I find it leave to my house without getting sick to the point of throwing up. I think it's honestly weird that a lot more people aren't like that.

I have a hard time identifying with people in the South and just how laid back they are about the state of things. It’s just one of those things where it’s like, “What the fuck is going on? How does nobody else care about this?” That just cuts you off. Or it makes you feel cut off.

There was just this whole time where if I’m going outside, I’m going to the Kroger that’s 0.2 miles away from me and going right back. I didn’t want to do things because of that fear, and because most people I encounter probably aren’t going to agree with me on anything either.

That was just where I was leading up to recording the record, and that was where the songs came from. Just a lot of anxiety.

For anyone who has issues with anxiety and things like that, definitely go get help because it’s really important. 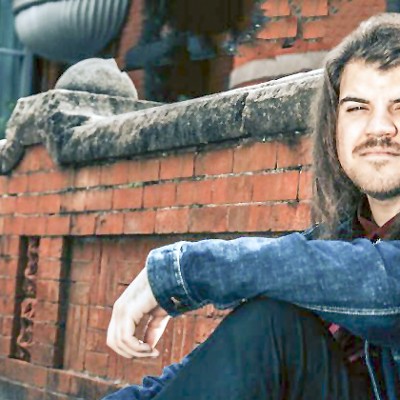