“The Met: Live in HD - The Gershwins’ Porgy and Bess”

“I Studied My History, I Studied My Past: Culture, Gender and Race in Beyonce’s ‘Homecoming’”

NO LESS than ten separate "alternative cinema" events are on tap for the next seven days in the greater Savannah area, and they run the gamut from educational to heartbreaking and from to lighthearted to downright titillating.

They include motion pictures (and filmed performances) geared toward small kids and mature adults. Some are quite well-known in mainstream circles, while others are merely beloved among fans of adventurous and somewhat obscure cinema.

Something for just about everyone, right?

Let’s begin on Feb. 5 on the Southside where Fathom Events presents an encore viewing of the Metropolitan Opera House’s brand-new production of the Gershwin Brothers’ classic 1935 work “Porgy and Bess” at the AMC Savannah 11 multiplex.

Set in a rough, African-American neighborhood in Charleston, S.C., this romantic musical melodrama about the tribulations faced by impoverished black folk in that time period is perhaps best known for its 1959 big-screen adaptation, but since the mid-1970s stage productions of this iconic piece (based on a restored version of the script) has enjoyed renewed interest and acclaim. This new mounting of the show is earning rave reviews, and now you can catch it in high-definition digital sound and visuals. 6:30 p.m. showtime.

One of the highest grossing films ever made (once inflation is factored in), it’s a bona fide benchmark in mainstream seventies popcorn pictures that still packs an admittedly sappy punch to this day.

I’m not gonna give anything else about the story away, but let’s just say that if you attend either of these two showings, you’d better bring a lot of Kleenex. These screenings includes a short bonus feature in the form of illuminating commentary from some of TCM’s esteemed hosts. Showtimes at 1 p.m. on Feb. 9 and 7 p.m. on Feb. 12.

Heading downtown, the Psychotronic Film Society’s long-running and award-winning Wednesday night series of overlooked and/or marginalized cinema from around the globe continues on Feb. 5 with a memorial tribute to the late Japanese actor Joe Shishido, best known for a series of hard-boiled, film noir-esque crime flicks he made in the late 1960s.

They’ll screen the uncut, restored version of perhaps his greatest effort, 1967’s extremely entertaining (if more than a bit perplexing) “Branded To Kill,” an avant-garde B&W action flick about a deadly rivalry between organized crime hitmen which boasts a plot so far out that it cost the director a lucrative studio contract. However, the movie has gone on to be deemed an historically important cult classic. 8 p.m. showtime, with English subtitles.

The following Wed., Feb. 12, the PFS celebrates Valentine’s Day a bit early, with a rare public screening of one of the most unorthodox and steamy romantic dramas of the early 1990s. The exact title remains a secret right up until showtime, but it can be revealed that the film’s female lead (an Oscar winning Best Actress!) was nominated for a Golden Globe for Best Actress for this role, and its male lead is a three-time Emmy Award winner who also won Best Actor at the Cannes Film Fest immediately prior to this particular film’s release. 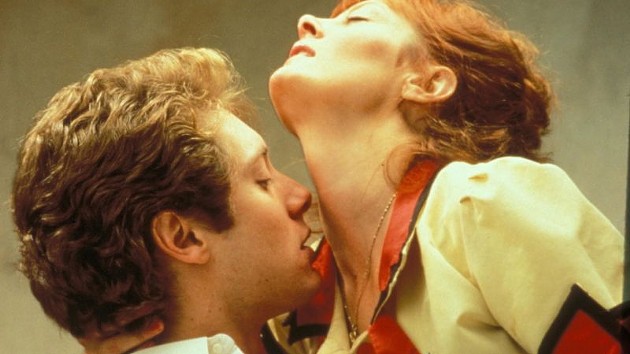 From the PFS Valentine's Day film.

Heading back out to the Southside, on Feb. 6, the Armstrong Student Union on the campus of Georgia Southern University offers a free event titled “I Studied My History, I Studied My Past: Culture, Gender and Race in Beyonce’s ‘Homecoming.’”

Held in the school’s Ogeechee Theater, this special screening of the superstar singer-songwriter’s 137-minute Netflix documentary centered around her historic 2018 performances at the Coachella Music Festival is presented by the Writing and Linguistics Dept. and will include a panel discussion moderated by Prof. Vivian Bynoe and featuring –among others– Prof. Christopher Cartright, Dr. Hapsatou Wane, Dr. Kendra R. Parker and Ricky Perkins. Parking is available onsite, but if you’re unfamiliar with the layout of the Armstrong campus, I suggest you arrive early to find both the building and a good spot to park.

The tense tale of an aging Broadway star (Davis) who finds herself put in a compromising and somewhat dangerous position by an overzealous young fan (played by Anne Baxter), it stands as the only film in the history of the Academy Awards to earn four female Oscar nominations for acting. By all means, do your best to catch this rare big-screen presentation. You won’t regret it. 7 p.m. showtime.

A few nights later, on Feb. 13, the Tybee Post kicks off a three-day run of one of the most highly praised war movies ever made: last year’s WWI epic “1917.”

Released this past Christmas day, director and co-writer Sam (“American Beauty,” “Skyfall”) Mendes’ tale of two British soldiers in the midst of battle who must race to deliver an important message to their superiors was partially based on a personal anecdote told to the filmmaker by his grandfather has, in all fairness, been compared by many to the plot of Steven Spielberg’s 1998 WWII epic “Saving Private Ryan.” However, this motion picture’s unusual production conceit is that it is meant to seem as though the entire film takes place in one continuous, two-hour-long shot.

Folks can’t stop talking about this film, and it is said to be one of the most engrossing, nail-biting pictures of its type ever made. It wound up with a whopping ten Oscar nominations, including Best Picture, Best Director, and Best Original Screenplay. It would seem to be a film that is custom-made for seeing in a theatrical setting.

Out in the nearby Effingham Co. city of Springfield, their similarly sized restored historic venue, the Mars Theatre, opens a two-day run of writer and director Greta Gerwig’s new take on Louisa May Alcott’s beloved novel “Little Women.” To date, this adaptation has garnered tons of critical praise and raves from audience members. It received six Oscar nods, including Best Picture, Best Actress, Best Supporting Actress and Best Adapted Screenplay.

With a stellar cast featuring Saoirse Ronan, Bob Odenkirk, Emma Watson, Timothée Chalamet, Florence Pugh, Tracy Letts, Laura Dern, Chris Cooper, and Meryl Streep, this period drama is the tale of the intertwining lives of four sisters in the New York City area in the 1860s. No less than the Americna Film Institute proclaimed it one of the top ten films of 2019. It shows at 7 p.m. on Feb. 6 and 7 in this cozy, state-of-the-art cinema.

A week later, on Feb. 13, the Mars opens an extended run “Sonic the Hedgehog,” the newest theatrical movie based on the Sega videogame franchise. Unlike the 1996 animated film of the same name, this effort mixes CGI with live action, and stars James Marsden (HBO’s “Westworld”) and rubber-faced funnyman (and acerbic political activist painter) Jim Carrey (“The Cable Guy”).

It’s a family-oriented feature about an extraterrestrial hedgehog who flees his home planet for earth, in hopes of escaping evil characters who are jealous of his amazing running speed.

And last but certainly not least, the SCAD Cinema Circle’s latest series of informative screenings of notable feature films continues on Feb. 7 at Trustees Theater with writer-director Amy Heckerling’s adorable 1995 coming-of-age comedy “Clueless,” starring Alicia Silverstone, Paul Rudd, Donald Faison, Breckin Meyer, “The” Wally Shawn and the late Brittany Murphy. The final selection in the Cinema Circle’s “Trendsetters” series of films which either beautifully captured particular fashion trends for posterity or whose costume design wound up spurring trends of its own, “Clueless” is one of the most well-known selections to ever be included in the Cinema Circle – as it gained a life of its own through cable TV airings after an unexpectedly successful theatrical run.

However, an entire generation has likely never had the opportunity to see this film on the big screen as its creators intended, and know it solely from those TV broadcasts, most of which are usually edited for both content and running time. This unique opportunity to see it fully uncut alongside possibly hundreds of other folks should be a treat indeed.

The film is a clever update of Jane Austen’s 19th century novel “Emma,” the story of a manipulative clique of (mostly) well-off Southern California high school students, and is packed with period-correct lingo, clothing and music cues. Its cult success bled over almost immediately into mainstream visibility, and to date it has inspired a number of follow-up novels and a spinoff TV series. Rumor has it there is a big-budget remake in the works. However, there’s truly no need for such a thing, as the film is darn near perfect as it is, and holds up amazingly well to this day.

All Cinema Circle screenings are hosted by a rotating group of SCAD faculty members and local film experts who introduce each picture and moderate lively audience Q&A sessions afterwards. For this installment, I myself will serve as host, alongside a representative from the school’s Fashion Department. Please come out to the show and say hi. This is a great little movie and the whole evening should be a really fun time. 7 p.m. showtime.