CORRECTION: In last week's piece discussing tourism and author Elizabeth Becker's trip to Savannah, we mistakenly attributed some wage/employment data to Visit Savannah. Visit Savannah is tasked with marketing the area as a destination and doesn't actually provide or research those statistics, which originate with the U.S. Dept. of Labor. We apologize for any confusion this may have caused.

UNEXPECTEDLY, the biggest news in Savannah last week was the epic reveal of the name of our new local baseball team: The Savannah Bananas.

Within about an hour of the news, it was solidly viral, and indeed was almost all anyone in town was talking about.

Many didn’t like the name “Bananas,” and many did. But the point is everyone was talking about it.

Regardless of what you think of the name, it was an epic marketing win for a club which isn’t even affiliated with Major League Baseball, but is a collegiate summer league.

Am I going bananas about the name Bananas? Well, it’s not what I would have picked (get it?). The idea of writing a lot of very punny headlines about them does have great a-peel (get it?). I just hope they don’t slip up (get it?).

See what I mean? Epic win.

If this early marketing expertise is any indication, the Savannah Bananas might be able to come close to replacing the Sand Gnats in our collective hearts.

And it also holds good news for those of us who deeply value Historic Grayson Stadium and the long and amazing history of baseball in Savannah.

As serendipity would have it, I was able to visit another historic ballpark a few days before, during a trip to Detroit.

(I could easily write a whole other column about my experiences in Detroit, which were uniformly great. Suffice to say that you shouldn’t believe all the negative propaganda/misinformation you read about how horrible The Motor City is.) 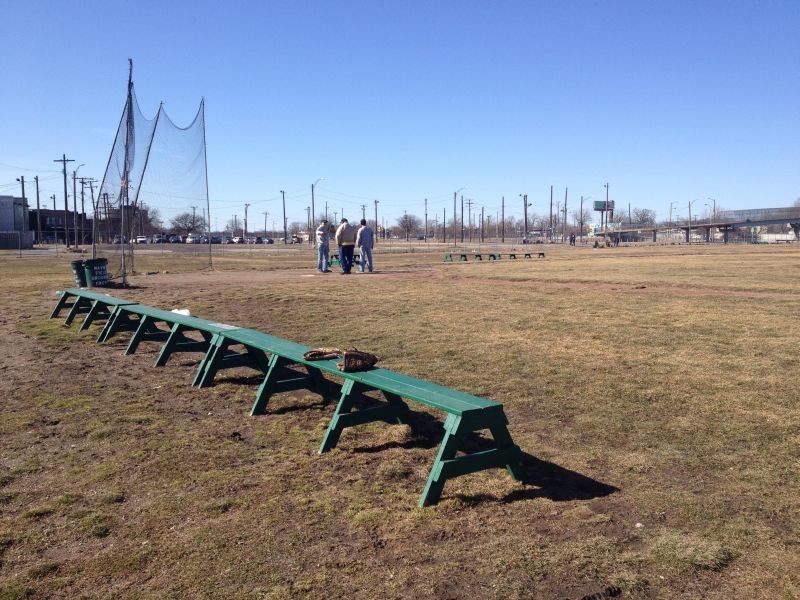 The historic infield -- "hallowed ground" -- is all that remains of the old Tiger Stadium in Detroit, now neglected but for the hard work of a few community volunteers.

One of the most historic franchises in all professional sports, the Detroit Tigers of course now play in Comerica Park, a tastefully designed modern ballpark that opened in 2000.

Before that, for nearly a century, the Tigers played in Tiger Stadium, once known as Navin Field, which was finally torn down in 2008.

All that remains on that now-forlorn corner lot at Michigan and Trumbull Avenues are the old infield/pitcher’s mound, a few rusting original gates, and the original centerfield flagpole. A makeshift backstop teeters behind home plate.

A private consortium has bought the land for a multi-sport facility and will soon tear up the old diamond and put in Astroturf.

The old Tiger Stadium hosted the greatest players of the 20th Century: The “Georgia Peach” himself, Tiger great Ty Cobb; Nolan Ryan, who struck out 17 batters in one game there; Ted Williams, the game’s greatest pure hitter; Babe Ruth, who hit what some consider the longest home run in major league history out over that centerfield flagpole; and many, many more.

Today, you can park your car on the sidewalk and casually walk through one of the old wrought-iron gates and right out onto that pitcher’s mound where Nolan Ryan dominated. You can stand in the left-hand batter’s box where Ruth, Cobb, and Williams all dealt their danger.

It’s a very powerful experience for any true baseball lover. But it’s a bittersweet pleasure.

Some vintage gates still stand at the site.

Despite being declared a state historic site and being on the National Register of Historic Places, this vintage treasure of Americana is ignored not only by the city and state government, but by Major League Baseball and the Tiger franchise itself.

Volunteering for the task of preserving the grounds is a small group of dedicated Tigers fans calling themselves the Navin Field Grounds Crew, who donate their time in the interest of history, and of nostalgia, and of community.

Some have jobs, many don’t. Some have preservation backgrounds, many don’t. But on a decent day, you can find several of them hanging out, picking up litter, raking the base paths, trading baseball stories.

During my visit, a gregarious windbreaker-clad volunteer shows me a modest bench they put in the location of the old Tigers dugout. In small stick-on letters and numbers like you’d buy at a hardware store to put on your mailbox, the bench bears the names and numbers of recently deceased Tiger greats.

“We did this ourselves to honor these fallen Tigers. The Tigers themselves can’t be bothered to do anything to honor their memory,” the man said. “What better place than where their old dugout was?”

The makeshift memorial to fallen Tigers, by the volunteers themselves.

Describing the park’s new owners as “greedy bastards,” he said, “This is hallowed ground, man. It’s a travesty what they’ve allowed this to turn into. But they don’t care. All they care about is money.”

The whole experience was eye-opening, not only in its own right but in relation to Savannah’s baseball history.

This could easily be Grayson Stadium, I thought as I walked the old Tigers infield. A desolate, nearly forgotten place where one-of-a-kind memories go to die.

Say what you will about the Savannah Bananas’ new name. Honestly, they can call themselves anything they want as long as someone is playing ball there.