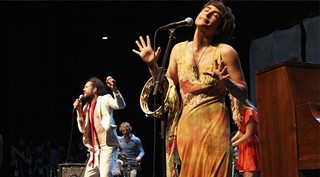 Everything old, apparently, is new again. Onstage, Edward Sharpe and the Magnetic Zeros look like a barefoot road company of Hair, dancing and grooving, with a lot of blissed–out smiling and group hugging, shirtless frontman Alex Ebert playing the messianic Berger to the adoring members of his “tribe.”

This sort of retro hippie–ness in the year 2010 might seem a quaint anachronism until you realize that the music made by this seemingly ragtag band of gypsies is exceptional. Performed on guitar, piano, accordion, trumpet, mandolin and whatever else works, it’s folky, poppy and reggae–fied, and once you hear it, it becomes much more difficult to dismiss the band as peacenik poseurs, stuck in the ‘60s, man.

Edward Sharpe and the Magnetic Zeros arrive at the Trustees Theatre Sunday, on the final leg of a massive tour that’s taken them to Coachella, Bonnaroo, and all points north, south and in between.

Against all odds, this L.A.–based band – there are between nine and 12 members, depending on who got on the bus that morning – has become a great American success story.

The album, Up From Below, never came close to cracking the Billboard Top 100, but it’s been embraced by a vast community of music lovers nonetheless.

It’s the live show – freewheeling, spontaneous, a traveling rock ‘n’ roll circus – that’s got tongues wagging coast–to–coast about the dawning of a new Age of Aquarius.

Edward Sharpe, for the record, is a fictional character created by Ebert (formerly of Ima Robot) to appear in a series of stories and short films, which you can see on the band’s website.

We spoke with Magnetic Zeros guitarist Christian Letts, a Django Reinhardt devotee who pumps little fiery bloodlines of gypsy jazz through the body of the music.

Watching you onstage, it seems that you’re all having such a great time. Alex says you’re steadfastly avoiding doing a quote–unquote show. You’re just playing music.

Christian Letts: If you’re not having fun, why would you do it? We’re having a blast. Every night, the show’s different; we never play the same song the exact same way twice. You know, we don’t have a set list. Which is a great idea, but sometimes we take too long of a break between songs before we figure out what the fuck we’re gonna play.

It’s like, we’re not taking it too seriously. Just keeping it what it’s supposed to be. And that’s just having a blast. It translates, too – we’re having fun so people start having fun around us. People like having fun. I think it’s contagious.

Pardon the portentous phrase, but in “today’s music business,” don’t you think it’s weird that what you do worked, and your approach is successful? Things are so pre–packaged these days. Spontaneity seems destined to fail.

Christian Letts: I like it, so I’m not surprised that other people like it. This sounds like arrogance about what we’re doing, but I think there’s some great songs. When I went to Alex’s and he played me “40 Day Dream” for the first time, and we started working on that, I was like “OK, I know what I’m doing with my time now.” I was that taken with it.

When I think about the beginnings, making demos in our little studio apartment ... we didn’t have drums in there at that time, so we had a mic hanging over our shoulders, stomping and clapping for the drumbeats in the background. And doing it eight times so it had some weight behind it. I was pinching myself then: “This is such a cool recording experience.”

Then, to be here on the road and going places we’ve never been before, and everybody knows the fuckin’ music, it’s a bug–out, you know? I just feel blessed. At the end of the day, I’m like “Shit, man. This is amazing.”

Are you still traveling on the old school bus?

Christian Letts: That bus wasn’t going to make it for as long as we’re going to be on the road. We’re taking it out this summer, later, for the shorter trips. But we have long drives over the Rockies, so we were like “We’re not sure this one’s gonna make it.”

You often describe the band as a “family.” It sounds like, oh, everybody lives together in a big house, and you eat together ...

Christian Letts: Most of the recording of the album was breaking bread first, and then going into the studio ...

Alex is my brother, you know? We’ve been best friends since we were 3. Niko (guitar) and Airin (bass) have the same kind of relationship. I’ve known the drummer for about 16 years. And there’s a lot of people that I just met, but I feel like in other lives we were related somehow.

But such tight traveling with your family ... sometimes I imagine you just don’t feel like it, and you have to put on your “professional” hat and just get on the bus.

Christian Letts: Man, this is a hell of a job. I mean, that’s kind of a ridiculous word to call it. But playing music for a living, man. Sometimes it’s hard, but we’re traveling around, getting to see the fuckin’ country, having a blast. And we’re playing music – what’s better than that?

Nobody criticizes the music, but people sometimes write you off as “a bunch of hippies on a bus,” and you’ve been called “cultish.” How do you react to that stuff?

Christian Letts: I don’t really give a shit, honestly. I don’t even read those things. One I did read, which was hilarious, somebody wrote “Somebody please shoot the Edward Sharpe bus. This is the most untalented group of people.” It was the most hateful thing, but it was so hateful that it became really funny. We were like “Wow, we really affected this guy to the point of wanting to shoot us. And print it.” It’s pretty hilarious.

In a grand sort of Barbara Walters way, I’ll ask: Is there a message to your shows? Is there “Here’s what we want you to take away”?

Christian Letts: I don’t know if there’s a message. Love, forgiveness, happiness? I mean, as cheesy as that sounds, these are all good things. And it reaches me – hey, I’ve learned a lot from being a part of this project. I’m learning a lot of things I hadn’t confronted before, and giving a lot of forgiveness to important people in my life that I had not given that to.

That’s what I’ve come to.

It’s funny, because there are people that you don’t expect to bug out at these shows, and they’re fucking going nuts! And all of a sudden they’re like, “Wait a minute? Is this silly?”

You have one co–songwriting credit on the album, for the song “Jade.” Many of the others contributed to other songs. How does the songwriting process work for the band?

Christian Letts: Alex had a lot of the songs on this album before we all kind of got together. Then there were some songs, we were having dinner, or having a glass of wine, hanging out and strumming something. Like “Up From Below,” probably within 45 minutes we had a song start to finish. It a changes every night–type vibe. When it happens, it happens.

Does Alex have the ultimate word, or is everyone’s opinion valued?

Christian Letts: Everybody’s opinion is definitely valued. We all have different tastes in music, but we all have same kind of view – when it’s done, we kind of all know. There’s some debate sometimes, like “Oh, I like that mix better than the other one,” we kind of go back and forth on a couple things. But we’re all very respectful of the art, you know? Of the piece of work that we’re doing.

It’s cool that you have a trumpet in the band. Sometimes it’ll be “Here’s where the guitar solo comes in,” but instead it’s a trumpet. How does that change the dynamic of things for the musicians?

Christian Letts: I love the trumpet, man. He gives it that kind of Sergio Leone, Ennio Morricone–type vibe, like a Spaghetti Western vibe. It’s really a great sound, especially for the way he plays it for the songs we’re playing. I feel like I can feel a big plain around us, a large, open desert or something. It’s really cinematic; it really helps everything crescendo. It’s pretty cool. And he’s a fucking hell of a trumpet player, as well.

What’s next for the band?

Christian Letts: We’re on tour for another month and a half, and then hopefully we’ll start recording the next album in September. That’s what I’m thinking. Take a month or two off. We’ve got a couple one–offs, but we’re not on the road like we have been for the past year.

Edward Sharpe and the Magnetic Zeros