"I DON’T KNOW where we went wrong, but the feeling’s gone and I just can’t get it back."

“Does anyone know where the love of God goes when the waves turn the minutes to hours?”

Those two lyrics from two different hits sum up the songwriting and storytelling genius of Gordon Lightfoot: A complex depth of feeling and emotion, distilled to the most unadorned and unpretentious essence.

Now 78 years old and in his sixth decade of touring, Lightfoot hardly needs an introduction. Along with Leonard Cohen, he is Canada’s most influential musical export —sorry, Justin Bieber—and his string of hits in the ‘60s and ‘70s helped author the folk-rock sound, alongside his contemporary Bob Dylan. 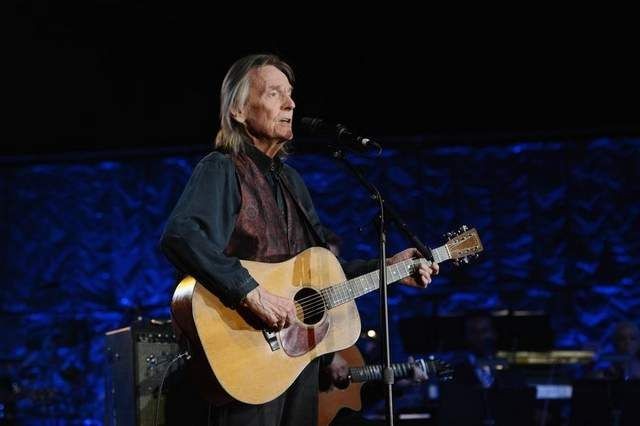 Lightfoot performs at Savannah’s Lucas Theatre on Wed., March 15. We spoke to him last week.

You’re one of a handful of artists who, when one of your songs comes on the radio, people tend to keep it on that song until it’s over, no matter how many times they’ve heard it.

I was 12 when I wrote my first song. And I’ve never stopped writing since. When I was 23-24 years old I already had at least 30 songs of my own. I was listening to Bob Dylan, Bob Gibson, and, maybe surprisingly to some people, a lot of country songs. I had a huge repertoire built up.

I first wrote professionally when I was 21, when I sold a song for a TV series on CBC. A lot of it was me writing songs to pay the rent. But I kept writing, and my first wife really encouraged me.

I’ve always remembered something you wrote in one of your liner notes, about playing a bar in Canada where everyone was trying to watch the hockey game on TV.

Oh, that was the Saturday night hockey games at Steel’s Tavern in Toronto. I played there plenty of times. The crowds were actually pretty polite, but they were definitely more into the hockey game. I often liken it to paid rehearsal. I’d play a lot of what I call ‘bawdy ballads’ to entertain and amuse them. You know, ‘Long John Tiddly Whacker,’ ‘The Farmer’s Dog,’ stuff like that.

That was actually where the record folks first came to see me. Peter, Paul and Mary recorded my tune, ‘For Lovin’ Me,’ and that was my first major hit as a songwriter.

You’re often mentioned in the same breath with Bob Dylan. Would you say you share similiarities in that you both grew up near the Great Lakes?

Sure, you could say that. He grew up in Hibbing, Minnesota, near Lake Superior, and then moved to Minneapolis. Of course we both ended up in New York about the same time, around 1963-64, when it was a whole hub of activity in folk music.

We were represented by the same talent manager, and the next thing I knew I was meeting Bob Dylan personally. I was awestruck. I still am, whenever I see him. I’ve met with him often through the years.

People are always trying to get us together to do a duet. Can you imagine that? A duet with Bob Dylan and Gordon Lightfoot! Who knows, maybe the idea can pick up some momentum and we will make it happen! [laughs]

Since Dylan won his Nobel Prize for Literature, I’ve heard people say that if Dylan deserves a Nobel, surely Gordon Lightfoot deserves one as well. What would you think about that?

First I’d have to think if I really want to fly to go get it! [laughs]. No, I wouldn't care. I've received enough prizes in my life.

I finally managed to keep my nose clean enough to win lots of things. I’m particularly proud of being named a Companion to the Order of Canada, the highest level of that honor.

I even got to meet Prince Charles and Lady Diana one time. I get invited to a lot of stuff!

Americans have a brash type of outspoken patriotism. But I’ve found that Canadians are at least as patriotic, you’re just not as loud about it. What do you think?

We’re cousins. That’s always how I put it. We’re both cut from the same cloth. Basically, a bunch of English and French people coming over!

We make it down to the states to tour usually about six or seven times a year. I don’t know how any of the policies will change now, but we have all our work permits in order [laughs].

There’s a particular poignancy, a melancholy in your songwriting that always stands out.

“If You Could Read My Mind” was an example of me beginning to have the experience of losing. Of losing in love, losing in life. My first marriage fell apart, with two kids.

Unrequited love has driven thousands of songs. But for most young songwriters, the whole subject of pain and emotional loss is really a figment of their imagination. They don’t really know what it’s like, because they just haven’t lived through enough of it yet. Until then, they’re just imagining what it might be like.

You also had a battle with alcoholism.

Yes. That ended for me in 1982. I stopped drinking at age 45. It was fuel for songwriting though, for a very long time. But eventually of course it became an albatross. A real anchor around my neck.

It started out innocently enough. You know, a little Irish coffee on stage. But the more I drank, the more I got into the habit of doing irrational things.

You are one tough guy. You survived an aortic aneurysm in 2002, with a six-week induced coma. Within two years you were on the road again.

I finally woke up after six weeks, and immediately my first thought was what to do with my band! People were depending on me. And there were people hovering over my hospital bed with various documents to sign! [laughs]

I understand you had just completed material for the next album when you had to rush to the hospital.

It was providence that those recordings were there, already done. I really do chalk it up to providence. They were essentially demo recordings I made a year before. They were rehearsal tracks. My boys put the parts on while I was recovering.

It was your work, your music, that kept you going.

After awhile I just forgot about my condition. Overall though, I have to say I feel fortunate. Very, very fortunate.

Over 40 years after you released 'The Wreck of The Edmund Fitzgerald,' you still maintain close contact with the extended families of the crewmen who died in the real-life tragedy.

Anytime we're in their area, we always meet people connected with the ship. Mostly in the Great Lakes region, but they're spread out all over. We meet often with the Ladies' Committee in Madison, Wisconsin, for example.

You ended up altering the performed lyrics after you helped out with a documentary about the incident.

They got all the crew and equipment up there, and of course the whole time they were shooting the lake was calm as a mill pond [laughs]. I think they ended up getting about 50,000 feet of footage.

A problem came up in the script, about how were we going to say the tragedy happened? That line about the main hatch cover caving in—in a way that puts the fault on the guys on that watch.

That was one of the first details I read in the newspaper, when I was inspired to write the song. It didn’t come until verse five, but that caused a real problem because that sort of made their guys responsible. The whole thing started getting out of hand. That’s when I began changing up the lyrics a bit in live performances.

To me the genius of the tune is the specificity of the lyrics, your decision to tell the story in the voice of someone familiar with the sea, using correct nautical language.

A lot of that came from all the Irish and Scottish maritime lingo I grew up with. I’m from mostly a Scots/Irish background. I guess really just Scottish the more I think of it [laughs]. All of that came to the fore in that song.

I’m a bit of a sailor myself, though. One time I sailed out of Charleston.

Yep. But I got blown back to port by a storm 14 miles out! [laughs]. I love the sea. I still have a sailboat up in the Great Lakes, on Lake Huron. And I was a canoe tripper for a long time.

I love being out on the water. Honestly, when I first started sailing, it gave me a chance to dry out from the alcohol.

How many gigs do you still do a year?

We did 78 shows last year, in seven trips. We did 12 shows in England. We played the Royal Albert Hall. That was my third time playing there.

We’ve played in Savannah a few times over the years. We feel really good to be able to come back. I even have Savannah in one of my tunes, “Spanish Moss.”

They filmed Forrest Gump in Savannah, didn’t they? That was a great movie!

Speaking of Gordon Lightfoot , Lucas Theatre For The Arts