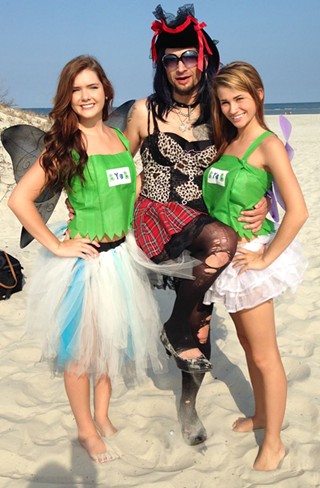 “I like attention,” he explains. “I go around every other weekend in some kind of costume, mainly cross-dressed, and absorb attention. And just walk around and meet people. Usually I go out by myself, and people come up and want to talk to me. They want to take their picture with me. I bump into cool people.”

Chris Cook simply enjoys wearing costumes. It started when he was a kid, in Pooler. “I didn’t especially like dressing up as a teenager, but I started getting back into it when I turned 21, 22,” he says. “You take on another personality.

“You’re somebody else. I can’t get blamed for the things that I do when I’m dressed up, because the next day I take off the dress and ‘I don’t know anything about that.’”

At 44, Cook’s something of a legend on the Savannah club scene. For 10 years he was the city’s unofficial toastmaster, planning and throwing elaborate, costumed theme parties and, most memorably, fun S&M-oriented “fetish balls.”

In 2010, however, he hung up the corsets and ball gowns and got married, announcing that it was “time to grow up” and be more of a father to his then 5-year-old son.

“I let it go for a few years to be a family man, and that didn’t work out,” he says. “So I decided to do my favorite thing in the world again, which is to throw a party and dress up.”

Which brings us to the July 19 Goth Night Reunion & Fetish Ball at Club One.

“In 2000, I started hanging out with some college kids who were goths,” Cook explains. “It was a large group, maybe 75 people. They were a very close-knit group. We used to go to Club One for Goth Night every Thursday—we had so many people they actually set aside a weekday night for us. And it went on for years.”

Eventually, of course, graduation weeded out the herd, and over time it wasn’t so cool to be a goth any more. “The scene eventually died,” says Cook, “and it didn’t come back.”

He was already doing house parties and fetish balls by then, adapting to the changing times. And then came his stint as dedicated Husband and Daddy.

This one, he’s excited about. Several of the original Goth Night DJs, including DJ Logik, DJ Shrapnel and Analog Kyd, will be spinning industrial synth and darkwave platters for your dancing pleasure.

There will also be “fetish play and seduction shows,” Cook says, and a costume contest (so start practicing with that white pancake and black lipstick).

The idea, as with everything Cook does, is to dress up and have fun. “It’s not a dour attitude that we’re having, but it is dark,” he says. “You don’t have to dress up, but we encourage everyone to. Wearing black would be fine! If you wear all white, you’re going to stand out.”