Grab a White Whale by the ale tail 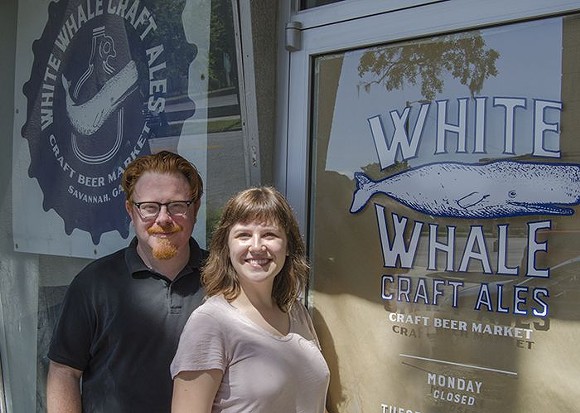 IT’S often the random connections and curveballs life throws at you that make the biggest impact in the paths we take. It was no different for the owners of Savannah’s newest craft beer store, White Whale Craft Ales.

Jason and Jocelyn Piccolo often joked about opening a craft beer store, but it wasn’t until Jason worked with Eddie Holley that a plan started to take form.

Jason and Eddie worked together in the film industry but Holley would go on to open Ale Yeah!, an Atlanta based craft beer store franchise, and Jason and Jocelyn would move to Savannah to teach at SCAD. Seeing a hole in the Savannah craft beer community the couple begged Holley to open an Ale Yeah! in Savannah with them helming the franchise.

That plan was altered when Jason was in a serious car accident, postponing everything. After recovery and with priorities changed Jason and Jocelyn, with Holley’s, blessing and encouragement, decided to go it alone and open their own store.

I spoke with the couple about how they came to craft beer community, White Whale and their attachment to Savannah.

“The Belgian section at Brick Store Pub in Atlanta sold me on good beer. From there it was just experimentation that led me to American craft beer,” Jason says.

“I love craft beer because it’s the most democratic of businesses, you can go from a garage to huge company or home brew beer kit to distribution.”

Jocelyn’s story is more personal. “I found craft beer through my father, Joe, who is a home brewer.” Joe continues as an influence, his carpentry work is a big part of White Whale’s build.

Wanting to add to the existing beer community, White Whale will be what the Piccolo’s call a “clubhouse for beer.” White Whale is located at 1207 Bull Street, just south of Forsyth Park.

“We’re beer snobs but we don’t want to be snobs to others. We want this place to be a hangout,” says Jason.

Plans include, music and tasting events and eventually gourmet style snacks “something to compliment different styles of beer.” Plans also include holding brewery events bringing in not only brewery reps but the brewers themselves.’

“We would love to have brewer master classes.” Jason tells me that being part of the beer community is to help customers “find a style (they like) and inform them of what is true about that’s style brewing process.”

In addition to bottles and cans White Whale will also feature growler fills. “We will start with twelve taps but could grow to twenty” Jason tells me. The growler area will feature salvaged 20’s era movie seats to serve as a lounge space. Wanting to be family friendly some of the taps will be reserved for sodas.

Sadly pint service is not an option unless the City of Savannah changes local laws.

I asked what would be their advice to a customer new to craft beer? “We ask questions, what do you drink? What are your tastes? We want to listen, not tell them what they want.”

White Whale currently has no official open date yet, but the couple intends to open the doors in the next two weeks. The Piccolo’s are patient though. With all that has happened in the years that it has taken White Whale to become a reality, who can blame them?

A few last minor curveballs will not change the fact that White Whale is becoming a reality and Savannah’s craft beer community is growing again.