LOGISTICALLY, the St. Patrick’s Day parade in Savannah is a challenging event. From where to park, where to stand or even where to go to the bathroom, local families have their own methods for enjoying the day.

One thing is for sure, the key to a successful parade is not the amount of food packed or how elaborate the presentation, it’s the time spent catching up with family and friends at Savannah’s biggest party. 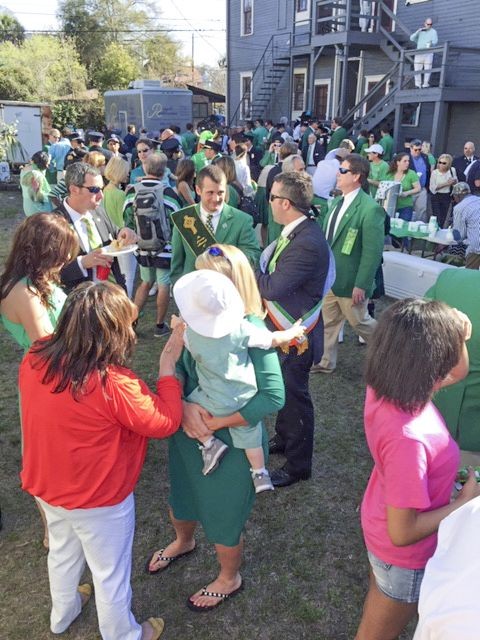 The ‘Crack O’ Dawn’ breakfast has brought together movers and shakers since 1972.

Getting Ready for the Day

The Crack O’ Dawn breakfast has been hosting parade committee, Irish families and friends and notable movers and shakers in Savannah since 1972. It started with Mike Foran (2016’s Grand Marshal) and a bunch of his Benedictine classmates meeting before they marched in the parade.

Now, as it has grown, Crack O’ Dawn is hosted by the Blackburn, Foran and Hogan families, serving a delicious, catered hot meal in an empty lot converted to an Irish breakfast.

The signature items are the cheese biscuits that Jay Blackburn’s grandmother and his mom made from scratch, green grits, eggs, ham and sausage — though the most popular part of the buffet is the full bar.

There have been scores of impressive guests over the years, from Mayors Rousakis, Adams, Johnson, Jackson and DeLoach to council members, city administrators, Georgia State Representatives and gubernatorial candidates.

In true Savannah Irish hospitality, once invited, people are always on the guest list. To handle 25 years of invitations, the families have hired the Diplomat on Drayton Street to provide the food for this year’s crowd.

The Mowers family has kept a spot for 25 years.

The Best Location, By Accident

Peggy Mowers worked for Jack Kingston just as he was elected to Congress. Knowing visibility was important, he planned to march in the parade.

With young children, she didn’t want to walk with the rest of the staff, setting up close to the local news station. As it turned out, this spot was perfect, with all the bands stopping and performing for cameras.

At the time, she had no idea that it would grow into a lifetime event for her family as well as their guests, “We’ve been doing this for 25 years. We’ve always included people who didn’t have a spot. We can have up to 50 people.”

Peggy tries to always bring a hot, hearty food item like jambalaya, green grits or shrimp casserole, the paper products and decorations for the tables, but the guests are responsible for bringing the other foods. They end up with baked goods, chicken nuggets and finger sandwiches, among other easy-to-carry items.

They set up a separate dessert table and one for hot food and sides and a totally different table as a working bar, “We tell people to bring what they want to drink and everyone shares.”

Peggy and several in her crowd have Benedictine Cadets marching the long parade, “We always make individual sandwiches and put them in the cooler for our sons. The food is looking pretty rough by the time they finish and can run out. We make sure that we save items for after the parade.” 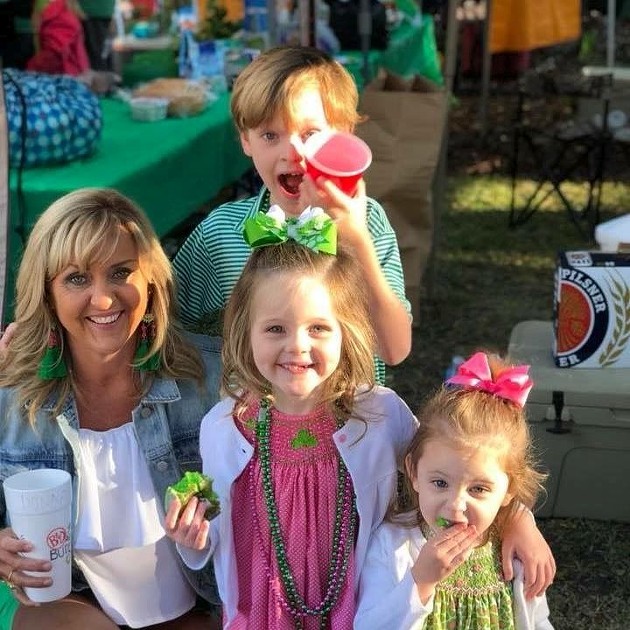 Donna Moody and her family have been setting up in Calhoun Square for over 30 years. Her two grown sons and son-in-law start camping out around midnight the night before the parade, intent on securing their spot.

When the whistle is blown at 6 a.m., they claim the area and begin throwing up tents and banquet tables. Everyone in the square spreads together and Donna describes the result as a menagerie of food:

“We have people that we’ve become friendly with just by being in the square. We see them once a year.”

Donna used to do more cooking for the event, but decided a few years ago to keep it easy. She and her family make egg salad in tea sandwiches, chicken salad, homemade hamburger sliders, turtle brownies and her son’s favorite oatmeal cookies.

“People don’t want to get a plate and sit down. They just want to pick something up and be able to hold a drink in one hand and talk to their friends.”

The Moody family has a favorite drink to include in their packing. They bring all the supplies for Bloody Marys to enjoy on parade day.

When asked if they have any plans to change their family event, they don’t see themselves ever missing the parade: “It’s the beginning of spring for us. We wouldn’t miss it for anything. We love it.” 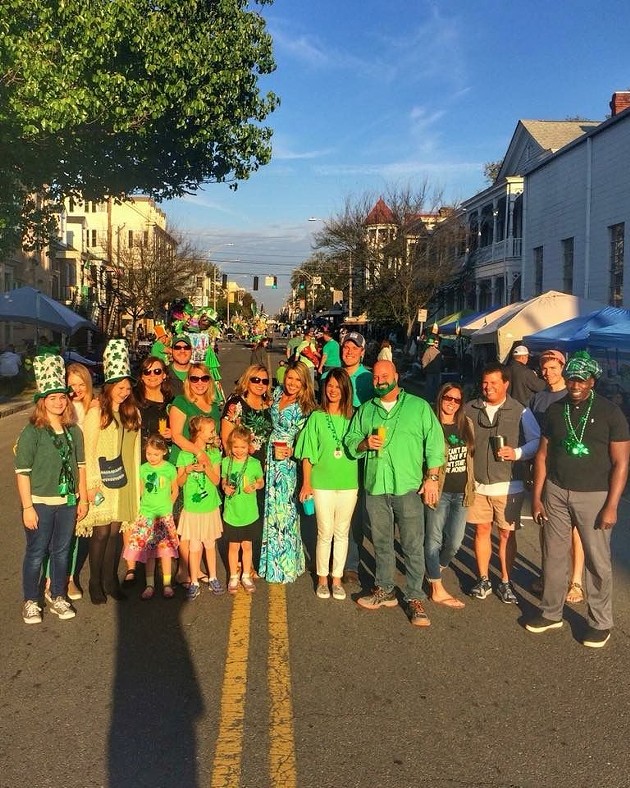 A Day For Friends and Family

When Kim Hunsinger’s children were little, she and a few moms wanted to claim good vantage spot to watch the parade. They decided to set up on Broughton Street, which let them get ready before the 6 a.m. start. The families invited a few friends and a tradition was born, one that has grown remarkably over the years.

“We have around 30-40 people. The same 10-12 are always involved and then they invite friends and whoever wants to hang out.” The group sends out a Facebook invite that can be forwarded to interested guests, instructing them to ‘bring a chair and a dish to share’.

“It’s basically potluck. Everyone who comes brings something. There are a few things that haven’t changed since the beginning, the mimosas from Ned Rinalducci starting in the morning and throughout the day and the corned beef sliders. Everything else that people bring is a surprise.”

With one child in college and one in high school, she appreciates the day for the family time it provides: “My favorite part is that they are so old and the tradition has still stuck. It doesn’t matter how old they’ve gotten. They are with me on St. Patrick’s Day, which is so cool.” 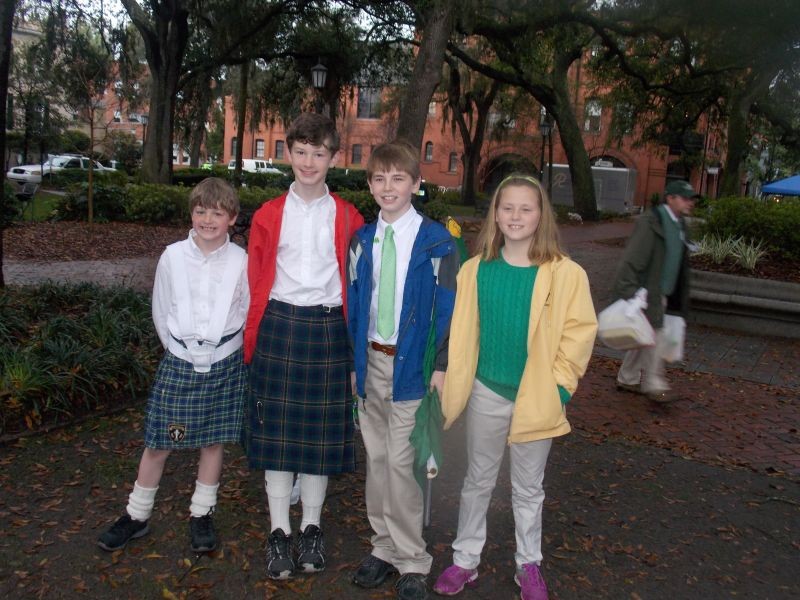 The Ryans gather on Monterey Square

Where the Parade Ends

Shirley and Tony Ryan set up in Madison Square, which isn’t even on the parade route. Tony and most of the family is in the parade, but they needed a meeting place when the marching was over. “We wanted to stay around downtown, but it’s so hard to go to bars and pubs with children.”

For around 30 years, the Ryan’s, their children and grandchildren and extended family have been packing up a simple picnic of beer, drinks, water and corned beef or ham sandwiches to hand to the parade participants when they finished the route. Shirley has a sandwich ready for everyone finishing the parade: “By the time they get in they are so hungry.”

Son and daughter-in-law Reid and Dawn Ryan have learned to bring their foldable aluminum beach cart to make transport easier. When the Liberty Street parking garage began selling parking, the family jumped at the chance to purchase a spot for the day to keep the car in close proximity to the event. The grandchildren are tasked with hauling the items in the cart back and forth from the parking garage.

After the parade disbands, if the weather is nice, the family spends time in the park. This is one of the best parts of the day for the Ryans. “It’s about seeing old friends, honoring our ancestors and hanging with our kids, grandkids and family,” Tony says, “That’s what it’s all about.” 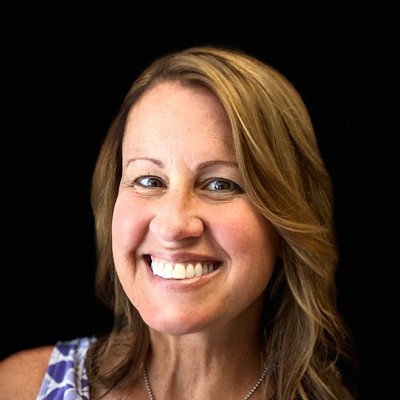