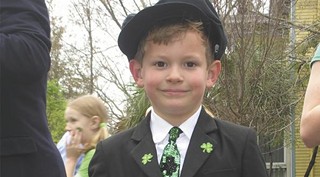 In Savannah, hearty St. Patrick's Day breakfast parties are as much a tradition as wearing green blazers and kissing soldiers in the parade. Good food, fellowship, and the occasional "adult beverage" are the order of the day for longstanding parties with decades of history behind them.

"It's like a big reunion," says Michael Foran, co-host with Jay Blackburn of a nearly 40-year-old party held downtown. "It's every walk of life. The Citadel boys come. You'll have Shriners there. All of our high school classmates, professors at the University of Georgia, people who work on Wall Street. I meet new people every year."

With the annual parade starting promptly at 10:15 a.m., it's the early bird that gets the green grits, cheese biscuits, corned beef hash, and pancakes at breakfast celebrations across the city.

Start times of 7 a.m. are common. For the St. Patrick's Day Parade Committee and Adjutant Staff, their private breakfast begins at 6 a.m.

"All 800 members of the parade committee will be there," says Foran, the committee's Vice Chairman. He'll attend the official breakfast before heading to his own party near the start of the parade route.

"Around the beginning of March 1979, Michael said to me ‘You know we've been doing this Crack o' Dawn party. Why don't we move it to your place?" says Blackburn.

Early that St. Patrick's Day morning, "I went to the door and there were a bunch of Irishmen standing there wanting to know where was the tap to the keg," says Blackburn. "And that was all it was, the keg on the back porch. From there, each year we sorta added something."

Those "added somethings" have evolved into a six-week preparation period each winter. Next week the hosts expect 400-600 guests will gather at that apartment building and an adjacent vacant lot (still owned by Blackburn) a few blocks from the beginning of the parade route. Tents and tables are set up and a catering crew dishes out green grits, ham, ten to fifteen gallons of bloody mary mix, ten gallons of screwdrivers, five gallons of orange juice.

For one of the first parties, Blackburn's grandmother made "a few dozen" of her signature cheese biscuits.

"They went real quick. The next year she started in January making them and freezing them, so we had several hundred," says Blackburn. After her death, the hosts tried each March to find cheese biscuits that compared to Blackburn's grandmother's recipe.

A few years ago Foran's daughter, Brianna, staffer for U.S. Representative Jack Kingston on a work trip to Jesup "discovered a restaurant ... who made cheese biscuits that are the closest we've found," says Blackburn. This week, Brianna or a friend will pick up 1000 biscuits in Jesup and deliver them for the breakfast.

Brianna's boss is one of dozens of politicians that have stopped by the downtown party. "We've had congressmen, mayors, council members, county commission chairmen, judges, the secretary of state, all types of candidates," says Blackburn.

"One year this fellow invited himself right up and said he was running for governor. Damn if it wasn't Sonny Perdue. It was before the Republican primary and there were a lot of candidates. I've felt like writing him and saying, ‘You crashed the party when you were a candidate, why don't you come back now that you're governor?'"

Across town at her home near Bonaventure, Pat Gallagher will be "receiving anytime after seven o'clock," on St. Patrick's Day morning. "I kick everybody out, rain or shine, at nine so we can get downtown to see the parade."

Gallagher's nearly 30-year tradition is a gathering of 30 or 40 guests, mostly friends who return each year from Savannah or out of town. "I have people from as far as Ohio and Philadelphia that come to this party."

"The first one was downtown on Jones Street, and it's moved to different locations as I've moved. Once I got it started and did it two years in a row everyone said, ‘Oh, Pat's doing it again.'"

Gallagher shares the cooking responsibilities with her local guests. "I make the eggs. I have staples I try to assign, and then I take whatever they bring me. The beverage menu consists of mimosas, Bloody Mary's and "coffee. You've gotta get those people alive and awake."

Along the parade route, the youth group at Wesley Monumental United Methodist Church has been serving pancakes beginning at 7 a.m. for at least fifteen years, says Joe Harwell, Minister of Youth/College at the Abercorn Street church.

"Our kids spend the night in the church. We get up around 5:30 and start preparing."

Adult volunteers do the cooking, while the middle and high school youth are in charge of night-before and early morning prep work and St. Patrick's Day table service. Over the last couple of years, they've served between 600 and 800 people.

A welcome recent addition to the equipment at Wesley is a commercial size coffee maker "that can brew in 3 ½ to 5 minutes. We will probably have five to ten gallons of coffee ready when people get there and then start making more and more and more," says Harwell. "Before, we had coffee makers set up all over the church, and transferred them back to the fellowship hall."

The Wesley pancake breakfast is an alcohol-free event.

Last St. Patrick's Day was the first year serving breakfast at the Thunderbird Inn, the restored mid-century motel on West Oglethorpe Avenue. General Manager Mark Thomas will be serving homemade corned beef, scrambled eggs and grits prepared on a "portable catering kitchen" in the parking lot of the facility.

"Krispy Kreme is donating a few festive doughnuts, and Moon Pie is sending down a new mint moon pie" for giveaways. As part of Thunderbird Inn's nightly turndown service, they place Moon Pies on guests' pillows instead of the more traditional chocolate candy.

"We charge three dollars for breakfast, and I give a dollar of that to the Ralph Mark Gilbert Civil Rights Museum," says Thomas. "I love the history, and it definitely fits in with the whole southern retro that the hotel tries to exude."

Those who want more than orange juice and coffee to drink are encouraged to BYOB.

I like to cook and I like to feed people," Thomas says. "It's the ultimate form of Southern hospitality."

Cost: $3 per person. Bring your own chair.

Benefits: A portion of the proceeds are donated to the Ralph Mark Gilbert Civil Rights Museum.

Menu: Pancakes, bacon, orange juice and coffee. Dine in or take out.