Grimes: In a dangerous spot

Canada's indie dance queen is ready for her closeup 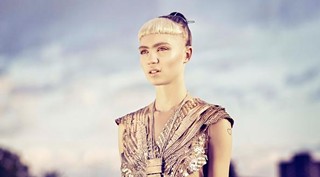 Claire Boucher: "Probably the biggest perk of this job, or the thing that I've enjoyed the most, is the fact that I'm getting into making videos and learning about cameras and lighting."

A melting–pot concoction of beat–heavy dance pop, cucumber–cool Britwave synthesizer, ethereal vocal harmonies from the Enya songbook and a lead falsetto borrowed from Bee Gee Barry Gibb, Claire Boucher’s music is as intuitively familiar as it is fresh and innovative.

Using the moniker Grimes, the Montreal–based Boucher is the buzz of today’s indie dance world. Although the 23–year–old made initial waves with the melodic and somewhat experimental albums Geidi Primes and Halfaxa, she’s moved up a meganotch with Visions, just released on high–profile 4AD Records. Everyone from Pitchfork to Vogue has rushed to profile the emergent artist.

You recently said “I really hate being in front of people, but I’m also obsessed with becoming a pop star.” Explain.

Claire Boucher: I’m naturally introverted, but also my favorite kind of music is pop music, pretty icon–oriented music. And essentially, that’s the kind of art I wanna make. So it’s a really weird thing that I’m like doing this because it’s incredibly nerve–wracking for me, and doesn’t feel natural at all. But I feel very compelled to do it.

Playing live can be really, really rewarding, but the risks are very high. Like, a bad show is one of the most humiliating experiences. Being humiliated in front of a bunch of people isn’t ideal, but at the same time the adrenaline from that possibility is like, pretty good. But in a dream world, yeah, I would just like to record and make videos.

You also told someone that you think of Visions as your first album. Why?

Claire Boucher: I always wanted to make pop music; you can hear that on my earlier records. I literally just didn’t know how – I didn’t know what a BPM was. Visions is way closer to what I’ve always wanted to do than anything I’ve done before. I guess. Or, actually, it’s the only record I’ve ever made that I feel happy about after the fact. All my other records, I hear them and I just cringe. I just didn’t know how to make them better, when I made them. Whereas this one I feel like it’s still going somewhere that’s artistically interesting, so I feel good about that, but I am actually able to do it.

Do you feel like you’re on the edge of something big? And do you want that to happen?

Claire Boucher: I definitely want that to happen, but I don’t feel one way or another about it because ... I mean, it’s always best to assume that you’re in a dangerous spot, otherwise you can get totally fucked over. The press can always turn on you at any time; they’ve done it a million times before. It gets to the point where I say something stupid and like it comes up in every interview, you know? And I say a lot of stupid things. You know, the higher you go, the longer you have to fall.

If you become all that, and everybody’s talking about you, doesn’t that restrict where you can go, creatively? Because people will then expect a certain thing out of you.

Claire Boucher: That’s why I have a bunch of other projects and bands. For doing other types of music, music that’s drastically different from Grimes. Because Grimes is like the pop project. And actually, I can go a lot of directions in Grimes. I certainly wouldn’t release a noise album as Grimes, because it would alienate my fans. Though I would release a noise/pop album.

I will never censor myself, that’s like my main priority, but in terms of the shows I can play ... it used to be my friends would call me and say “Hey, we’re putting on a show tonight, do you want to play?” and I’d be like “Yes.” I wouldn’t even think about it. But now, if I did that, it kinda fucks over my booking agent and ... it’s just weird, like I can’t maneuver like that any more. My year is literally like, I know what I’m doing up until next December. I can’t just like pick up and ... in a way, that sucks, but it’s probably worth it.

Is everybody kissing your ass now – “whatever you want, Claire”?

Claire Boucher: Yeah, but luckily my crew is really real with me. You can tell someone’s your friend when they’ll still tell you that what you’re doing sucks.

Your music is very visual – and your videos seem to capture the mood of the music. Do you see it all in one piece?

Claire Boucher: I was a visual artist and a dancer before I ever made music. And I’ve always really cared about music videos, both from a video perspective and a dance perspective, and I think that’s one of the reasons I’m also very interested in music. When I listen to music it’s like a recreational experience for me – I sit and think about all the videos. Like when I drive around, I look out the window and think of all the places where it would look good to shoot a music video. That’s just what I do, and obviously I know much less about it than I do music, and it’s something I’m working on now.

Probably the biggest perk of this job, or the thing that I’ve enjoyed the most, is the fact that I’m getting into making videos and learning about cameras and lighting, and technical stuff. Directing, and how people behave on a set. I think I almost like it more. It’s really cool and very interesting for me.

I have to ask why the project is called Grimes. Where did that come from?

What does the live show consist of?

Claire Boucher: On this tour, I have three guys working with me, and I kind of just set them free to do what they want. One guys takes my vocals and just fucks with them, runs my vocals through his computer and does crazy shit.

Another guy does electronic drums, so he jams over what I’m doing. Which is pretty malleable in that respect. I work with a keyboard, a sampler, and then I have two different vocal pedals. One that has all the background vocals – I make loops on it – and the other is just straight up.

All the samples I’m using are the stuff I recorded, with different keyboard lines. I change the vocals up a lot. If I had backup singers that would be amazing, but I obviously can’t reproduce exactly, vocally, what I have done on the records.
Sometimes I fuck up, or miss parts. And some songs, like “Be a Body,” it’s a very different song live. And “Symphonia” is almost exactly the same, although the layered vocals thing is different.

Do you do some of the older stuff, like “Heartbeats”? I really like those kind of almost ambient tracks.

Claire Boucher: The samples are just way too lo–fi. It just doesn’t sound good when you put up un–mastered samples of that old shit. And it wouldn’t work, because I’ve deleted the raw files anyway. Like, I don’t have any of the raw files for Geidi Primes or Halfaxa at all.

When I made those records, I never thought anyone was going to hear them. So when they were done I just deleted them so I could have space on my computer hard drive