Photo courtesy of LILAKK
Members of the band LILAKK.
Still on the heels of a late-night show at the Wormhole opening up for the touring band THE DEV, I caught up with Savannah-based band LILAKK. If you haven’t noticed, they’ve been on a bit of a roll lately, popping up with gigs — and a following — all over the city. Fronted by musical power couple Kirk and Calli Joiner on guitars and vocals, the band also includes Johnny Covington on bass, Zach Young on drums, and newcomer Adam Anderson on synth/keys. Together, they form the 90s alternative grunge band of your Doc Martens and plaid dreams with a sound that is reminiscent of Nirvana and Soundgarden. “As a band, our sound is greatly influenced by the 90s grunge era, and punk music,” Kirk said. “Punk-pop, classic/southern rock and even some modern, indie-pop/rock also play a hand in our sound.” LILAKK is a bit of a love story that has evolved over the years. Right before Calli moved to Los Angeles, California, to pursue acting, she became close friends with Kirk. “I convinced her to move back to Georgia and start a band together,” Kirk said. The two started out as an acoustic duo with Kirk on guitar and Calli on bass. Calli later picked up guitar and the pair started to write more punk/grunge music. They got married, the band grew to their current lineup and the rest is history. “We didn’t really consider LILAKK to be solidified until this current line-up,” Kirk said. In about 2019 or 2020, LILAKK really started to hit their stride and despite the pandemic, they worked nonstop. “Even though COVID slowed us down from gigging and we had seven or eight shows canceled when the country shut down, we were fortunately able to play a number of shows, whether it was online or at socially distanced venues, almost through the whole thing,” Kirk said. “A lot of bands moved to online performances or just ceased to play because of social distancing. For us, we got to focus more on writing and recording new music while things had slowed down.”
click to enlarge 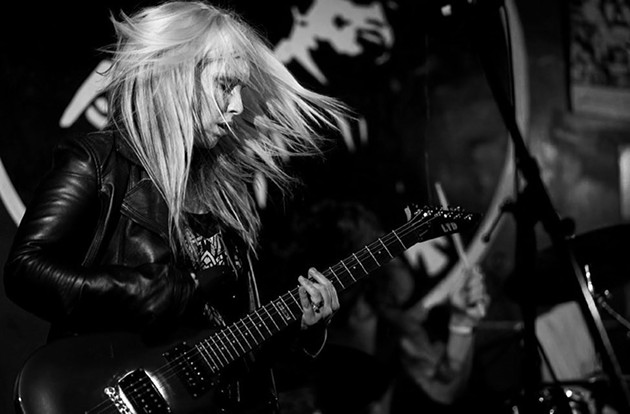 Photo by CSRAPHOTOGRAPHY
Calli Joiner of LILAKK.
In late 2019, LILAKK released “Prep Rally,” followed by “Here Today” and “Rain” in 2020. Their newest single, “Basement,” is being released on May 7 on all major streaming platforms. “For most people who have seen us live, we are known for high-energy and this song embodies that,” Kirk explained. “[The song] is heavily rooted in punk and bit of punk/pop with a twist of grunge.” The group started making music videos in February 2020 before the pandemic and have recently resurrected that aspect of their music with this new single, the “Basement” music video to drop sometime in June. Fans can also expect the release of three new singles and accompanying music videos over the next five to six months. The singles are all part of an EP called “School Bus Session” that the band did a limited, physical release of only 100 CDs back in December of 2020. “We got a lot of great feedback and reviews from our fans and we picked our next singles based off of how people reacted to our new songs,” Kirk said. While their touring plans were shut down last year during a short stint in Florida for their first-ever tour, LILAKK is ready to hit the road in 2021. “We are definitely ready to pick up where we left off and share our love of dirty, grungy, rock ‘n’ roll,” said Kirk.