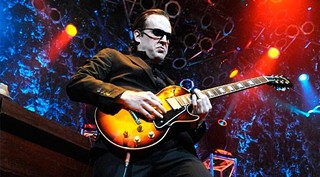 "I would've been a rich man if I had a nickel for every time somebody said that this kind of music won't draw a crowd," Joe Bonamassa says. "You'll never make it out of the rib joints and club circuit."

Last week, Joe Bonamassa was in New York City, where two sold–out nights at the Beacon Theatre were taped for a live DVD. Among his onstage guests was the iconic British vocalist Paul Rodgers.

The 34–year–old native New Yorker has become the six–string star of choice for the next generation of blues/rock fans.
In 2010, he was named No. 1 Blues Artist in Billboard (where his Dust Bowl album had debuted at the top), and in the pages of Guitar Player, Bonamassa has been voted Best Blues Guitarist for four years running. The magazine’s readers named him Best Overall Guitarist in 2010.

Bonamassa was a child prodigy who started playing in clubs before he hit puberty – he was 12 when his band first opened for B.B. King, who has since become a friend and collaborator.

At a sold–out show in London’s Royal Albert Hall in 2009, Bonamassa was joined onstage by none other than Eric Clapton.

His guitar tone is dark and heavy; his chops are unbelievable, and from all reports he is a showman of unlimited appeal. Numerous shows on his current tour – mostly in the big cities, where word tends to travel faster – have been sellouts.

“I try to learn something new about myself, about the playing, about the tone, every day,” Bonamassa told us. “And not everything you’re going to play is brilliant, but if you stick into it long enough ... it’s like a golfer trying to hit a hole in one. Chances are you’ll never hit one in your lifetime, but you never stop trying.”

Do you remember the first record that turned you on your head?

Joe Bonamassa: That blew me away? That just floored me? I would have to say that’d be a tie between the Jeff Beck Group Truth, and Free, Tons of Sobs. That’s when I knew what I wanted to be when a grew up – a Les Paul–totaling guitar hero. Free, the band totally worked for me. A simple four–piece, so simple and straight–ahead. And each part was so predicated on what everybody else was doing, that if you took one element out of the band the whole thing would collapse.

You started playing when you were pretty young – was the early British stuff a process of great discovery for you?

Joe Bonamassa: Yeah, the Bluesbreakers record with Clapton, all the Cream stuff. Clapton is huge for me, especially in that era. The other thing for me was Rory Gallagher and Gary Moore, Peter Green and Mick Taylor, it’s just endless.

And the American bands I listened to, ZZ Top and those kind of cats, Roy Buchanon, Danny Gatton. And before you know it, there’s pretty much all the grass seed you need to make the golf course. Basically, that’s my playbook. That’s the book I draw from.

It took you a while to discover the old blues guys, didn’t it?

Joe Bonamassa: I was listening to Cream’s version of “Spoonful” before I heard Howlin’ Wolf. The first American blues artist that I really discovered that really connected with me was B.B. King. I heard Live at the Regal when I was about 8 or 9 years old, and I said “That is just a hell of a band. And what a singer.” And it’s that painful simplicity, you go “I wish I’d thought of that. I wish I’d thought of that.”

Truth be told, that really is the deal. B.B. King, everything he plays is so simple, but yet it’s so original at the same time. Very few people can communicate like that with an instrument or a voice or a song.

And ultimately I discovered the greatness of guys like Robert Johnson, who I figured out I share a birthday with, and stuff like that. Howlin’ Wolf was huge for me.

Everybody’s got their own musical path. I just took more from the Europeans and the English and the Irish, predominantly, more than I took from my homegrown, indigenous music. I’m not right or wrong about it, it’s just taste. Do you like Coke or Pepsi. Or Dr. Pepper? Do you want to go to McDonald’s or the Cracker Barrel?

What about Stevie Ray?

Joe Bonamassa: A lesser extent for me. I appreciate the man, I really dug the man’s records and music. When I got that El Mocambo video, I thought it was wicked. But when I listen to Stevie Ray Vaughn, I get Hendrix, Trower, Albert King. And Stevie, ultimately, was able to take those influences and make them his own. To the point where when he would play, people would recognize them as Stevie Ray Vaughn as opposed to the combination of influences. And over his very short lifespan, he was able to combine that into a really wonderful style. And quite frankly, influenced a generation of players to the point where the music was played ad nauseum. You know, you see a kid show up with a Strat, and you think OK, here comes “Cold Shot” and “Pride and Joy.” And chances are it is. You aren’t going to hear “Tattooed Lady” from Rory Gallagher.

Those ‘80s guys ... I thought the Fabulous Thunderbirds were killer. And I saw Robert Cray twice in Utica, N.Y., in the days of Strong Persuader. And I thought it was just devastating.

Is this a big deal for you to film a live DVD at the Beacon?

Joe Bonamassa: I used to live three blocks from there, and I used to see acts like Steely Dan, the Allman Brothers, all these big names coming in there. And I’d say “Maybe one day I’ll make it there.” And I got to open up for Bad Company there, with Paul Rodgers, and I got to open up for Lynyrd Skynyrd for two nights. And to be able to come back and sell out two nights at the Beacon Theatre, that’s a huge, huge deal for me. In a year of huge deals.

I would’ve been a rich man if I had a nickel for every time somebody said that this kind of music won’t draw a crowd. You’ll never make it out of the rib joints and club circuit. And here we are, we’ve defied gravity in a sense. And found an audience for it.

There was no divine intervention. Or my good looks and talent! It was just hard, sheer perseverance and hard work. And if I can do it, anybody can.

Bonnie Raitt said to me one time, to make it you’ve gotta be good, or good looking. And I looked at myself in the mirror and said “I’ve got to be good.”