Japanese-born guitarist Hiroya Tsukamoto has been wowing audiences across the world for years now—becoming especially prominent throughout the U.S. since moving here almost two decades ago. A graduate of Berklee College of Music in Boston, Hiroya’s blend of folk, world music, and jazz is carried by his unbelievable guitar skills and in particular his finger style approach to playing.

Tsukamoto has recorded a number of albums over the years, as a solo artist and as a member of the group Interoceanio. He’s garnered critical acclaim along the way, and even landed in second place at the 2018 International Finger Style Guitar Championship. 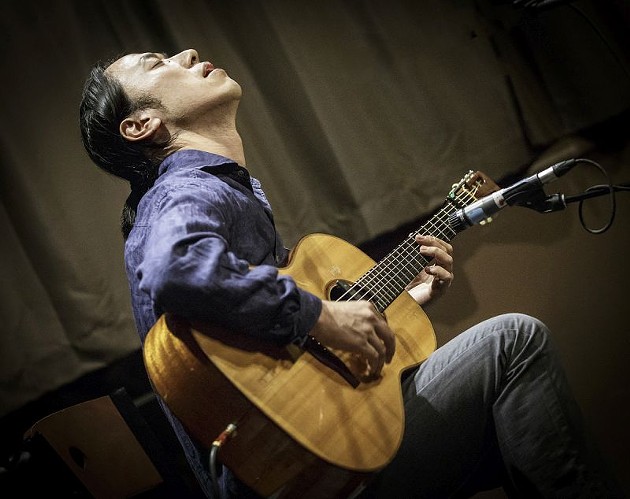 The musician and composer started making it a practice to perform at Unitarian churches several years ago, and reached out to the Unitarian Universalist Church of Savannah along the way. Schedules finally synced up, and Tsukamoto is set to open the church’s Sounds & Spirits concert series with a special show on Sun., Oct. 6. We spoke to Tsukamoto and the concert series’ organizer Kelly Blackmarr ahead of the show.

Hiroya, how did this connection happen between you and the UU church?

Tsukamoto: I contacted Kelly for the first time about three or four years ago, I think. Sometimes I play at different Unitarian churches in different states. I played one in Bluffton, South Carolina, and they told me about the one in Savannah.

What made you start playing in Unitarian churches?

Tsukamoto: I think it’s because they’re very open minded. Most UU churches are very open to different kinds of music. One church had me for the first time, and then I started wanting to do it more.

Kelly, what made y’all decide to start doing these concerts?

Blackmarr: You know, it really evolved over time. To add a little bit to what Hiroya originally said—he reached out to me a couple of years ago, and we like to plan our things a year in advance so we were completely booked up. I said, ‘Oh my gosh, you are amazing. Please reach out to me again.’ So we finally were able to put him on the docket, and we’re really excited about that.

I’ve been at the church for 26 years now, and it started several years back. We just started using the talent from the church—there’s so much talent in the church. We started to appreciate how beautiful the space was. It was partly an extension of enjoying our space, which we moved into in the 90s. The acoustics, the beauty, and the size is perfect for an intimate concert. Then we noticed that the community was coming into our space and really enjoying it. It became sort of an outreach ministry. We noticed that we could raise a little money for the church in the process, so that expanded into being approached by community artists. Ultimately that expanded to looking for talent everywhere.

Somehow word got out, and I started getting approached by people like Hiroya who noticed we had a series.

Hiroya, how did you start playing and pursuing music?

Tsukamoto: I grew up in a small town outside of Kyoto, Japan, which is a very traditional area in Japan. I started playing the banjo in middle school, and then a year later started playing guitar because my friends played guitar. I got a scholarship to the Berklee College of Music and came to the U.S. in 2000. Since then I’ve been playing in different places around the United States, mostly.

What has been your favorite part of seeing the country and traveling around?

Tsukamoto: The U.S. is huge and there are so many different places and different people. There are lots of miles to drive, but seeing great places and meeting great people makes me want to keep doing that.