New Service release party is June 11 at the brewery

For more info about this project, visit homelessauthority.org

A FEW weeks ago I wrote about the refreshing qualities of Belgian Wheat beer and how you should include them in your hot weather drinking. Service Brewing has added a new wit to the lineup of this style that you should be trying this summer.

On June 11, Service will have a release party for Gun Bunny Wit, their newest seasonal offering.

Veteran-owned and operated, Service Brewing is deeply tied to the military. Many of Service’s beer names come from military terms and Gun Bunny is no different.

Gun Bunny is military slang for soldiers who operate mortars. Mortars were often placed in small “rabbit holes” dug by the soldiers, though the term has grown to represent all artillery men and women.

In honor of these men and women, Service has brewed up a Belgian style wit but amped up some of the flavors. Traditional wits are brewed with coriander and bitter orange peel. 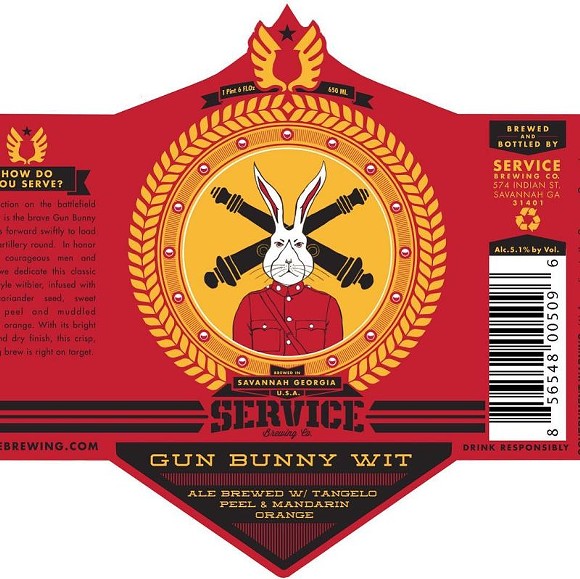 Service is using these flavoring elements but opted to brew with slight variations to create something more than a standard wit.

I visited Service the day Gun Bunny was being brewed. Service’s Head Brewer Austin Brown worked with a specific type of Indian coriander seed, cracked to release even more flavor. Not content with using bitter orange peel they puréed over 60lbs of mandarin oranges that were added to the mash to bring add the citrus flavor so desired in a good wit.

On top of the mandarin oranges, tangelo peel was added for more citrus and a touch of the citrus peel bitterness. They only brewed up 60 barrels of Gun Bunny so make sure you get a bottle. One of the best ways to insure you have a bottle of Gun Bunny is to attend the release party.

The release party for Gun Bunny Summer Seasonal will be Saturday, June 11, noon-5 p.m. at the Service Brewing Company Tasting Room. The $20 ticket buys a dish of food by Chef Marvin Sterling of Treylor Park, a 36oz beer tasting, brewery tour and a souvenir 22oz bottle of Gun Bunny Wit. The Anders Thomsen Trio will be on stage to provide the entertainment.

Proceeds form this event will benefit the Tiny House Project for Homeless Veterans. The aim of this project, organized by the Chatham Savannah Authority for the Homeless (CSAH) is to build 72,16’x8’ homes at a cost of $7000 each.

Two hundred thirty seven homeless veterans reside throughout the 35 homeless camps in our area. The Tiny House Project will provide our forgotten heroes a permanent, affordable home with health and welfare services.