ReStore gets a reboot 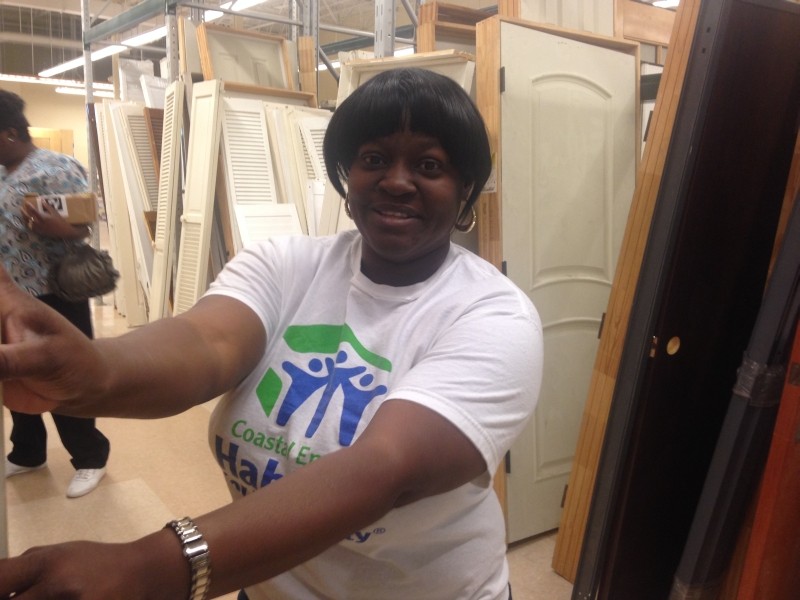 Volunteer Michelle Bostick put 350 hours of sweat equity into her own home.

IT WORKS to provide safe, decent housing for dozens of Chatham County citizens, but Coastal Empire Habitat for Humanity now has a new home of its own.

Last week the local arm of the national non-profit opened the doors to its new ReStore in the former Food Lion on MLK Blvd., and the grand 28,000 square-foot building includes plenty of office and warehouse space for its staff and volunteers.

Up front, shiny appliances, stacks of wood flooring and racks of fine rugs are just part of the ReStore inventory. It’s all for sale to the general public as well as available for Habitat for Humanity’s various community building projects.

Couches, desks and fine rugs line the aisles, and the shelves brim with plumbing and hardware essentials. Most of the building materials have been reclaimed from finished job sites, and the furniture is in excellent shape, some donated by a swank hotel after a recent remodel.

“This isn’t your grandma’s ReStore,” assures Habitat for Humanity Executive Director Michael Weathers. “We have so much great stuff here.”

Weathers hails from the Upper Peninsula of Michigan, and the Yooper arrived in Savannah last fall to take the helm. He brought big ambitions of growing Habitat’s reach in the community, but his first task on the job was to relocate operations after the rent jumped on ReStore’s previous location in McAlpin Square.

“I had to get the lay of the land real quick,” says Weathers. “In less than six months, we had to find a retail space that we could afford, and I really wanted to consolidate our offices as well.”

The challenge ended in a coup—not just for Weathers and his staff, who were able to complete the buildout and move across town while continuing to aid clients—but for the neighborhood.

When the Food Lion was built in 2011, its Carver Commons shopping center was touted as an economic anchor for MLK Blvd. and an alleviant to the food desert issues of Savannah’s westside. In spite of high hopes and a 20-year lease, the grocery store closed less than a year after it opened, along with three other Savannah locations.

Food Lion’s parent company cited the closure as part of a “brand re-positioning strategy” for the “underperforming” store, though some shoppers complained that the shop’s failure to carry WIC items and other products vital to nearby residents contributed to poor buyer turnout.

All that square footage isn’t going to waste anymore. More appliances arrive every day to fill the space, and existing infrastructure like the super-industrial loading dock helps move more affordable dishwashers, sub-zero fridges and window frames than ever before.

The open doors are attracting seasoned contractors and builders as well as a stream of curiosity seekers. Construction newbies flock to weekly workshops on basic tool skills, bringing new life to the red brick shopping center that held only the main branch of Carver State Bank for the last three years.

Weathers was delighted to find a wealth of businesses ready to help with the move and immediately found a mentor in Carver State Bank president Robert James.

Weathers has also forged community partnerships on his own: Gaster Lumber is a regular contributor to the ReStore, and many employees have come through social service agencies and organizations.

“I have a special place in my heart for special needs,” says Weathers, who taught public school in Indiana and served as a county controller before joining Habitat. “I’d rather take a risk on someone and give them a break.”

Proceeds from the ReStore allows Habitat for Humanity to do more of what it does best: Helping deserving citizens buy their own well-built homes.

Recipients are chosen by their need for affordable housing, but it is their willingness to contribute to the construction of their own and others’ houses that cements the deal. In order to secure the no-interest loans offered through the program, partner families must put in at least 350 hours on the job site.

Habitat calls it sweat equity, and Michelle Bostick knows all about it.

Bostick, a First Transit bus driver, had been living in the Carver Heights housing community when she applied for Habitat For Humanity two years ago.

She has spent the past year volunteering on several sites, including a sweet little bungalow on Texas Ave. that was renovated from the ground up.

That house is dedicated to the memory of Rob Bonder, whose family raised over $50K over the past decade to honor the affable, creative real estate agent who passed away in 2004 at the age of 31.

“I didn’t even know while I was caulking and painting that it was going to be mine,” says the single mom with a wide smile. “It is my first home. I’m ready to move in!”

This past weekend, that’s exactly what Bostick and her kids did. A bubbly crowd turned out to bless the new home on Saturday, and Weathers was there to join in the celebration.

While he has the hardcore Yooper work ethic that makes it possible to juggle the giant new ReStore and secure corporate sponsorships, the moment a person turns the key on the door to their new Habitat home, he becomes a total softie.

“You’ve got to believe in what you’re doing,” he says with a tear in his eye. “Making other people happy makes me happy.”