Hands Across the Sand

SINCE 2009, coastal communities have held hands across the sand of the beach to oppose the expansion of offshore drilling. The action turned into an event of the same name and is a favorite annual event.

This year’s Hands Across the Sand takes place Saturday, May 18 at the Tybee Island Pier. Tybee Mayor Jason Buelterman will host a press conference for local elected officials prior to the ceremonial hand-holding at noon. Before and after the event, there will be tabling by several groups, and there will be plenty of opportunities to socialize with like-minded people.

Cosponsors of the event are Oceana, Surfrider Georgia, Savannah Chatham Sustainability Coalition, and the Savannah Riverkeeper. 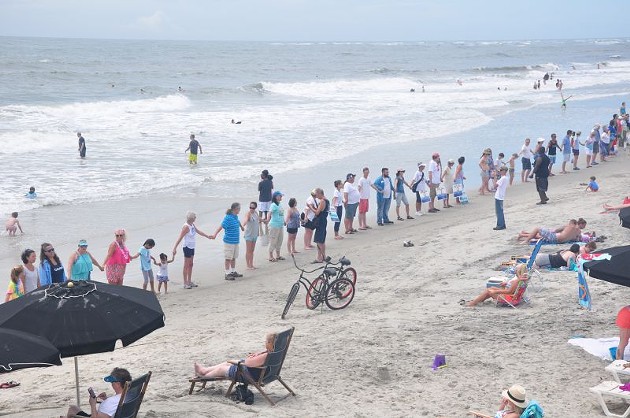 We spoke with Paulita Bennett-Martin, activist extraordinaire and organizer of the event, last week.

Tell me more about this event.

Hands Across the Sand was founded in 2009. That’s when it really came together in vision and by 2010, the first one was hosted in the Gulf of Florida. It was created in an effort to oppose symbolically the lifting of moratoriums of offshore drilling in the Gulf. Then it grew to other communities having Hands Across the Sand across the United States, and now they’re all over the world.

On May 18 at noon, they ask people to take 15 minutes of silence in solidarity, holding hands across waterfronts. If you’re not on the waterfront, there are communities doing it in major cities. I went to one in Belize in Belmopan, the capital, which is inland. They usually do it around some sort of government building.

It’s ebbed and flowed with the crowds. Last year we had at least 80 people, if not 100.

I think a lot of that is because of the Trump administration coming into office and unleashing this really aggressive plan for offshore drilling and repealing a lot of what the prior administration had put in place. It motivates people when they see risk in front of them.

To be fair, there were a lot of people that came out specifically for the event, but there was also about a good 15 percent of the crowd that joined us because they learned about it right there on the spot. Just people going to the beach who saw us and said, “What are you doing?” And we said, “We’re doing Hands Across the Sand to oppose the expansion of offshore drilling and seismic testing.” They were like, “What do we do?” 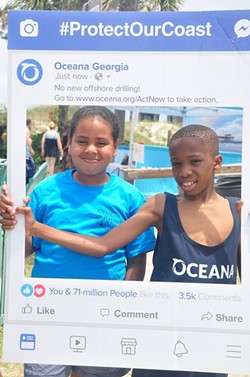 It’s growing. It’s one of those things that we put it out there and next thing you know, people are like, “I want to be a part of it!” We’ll have tabling, we’ll probably have an online petition people can sign onto. A lot of times afterwards, the neat thing is it’s a great opportunity to get together with other people that love the ocean and do things like go for a paddle, meet other ocean lovers, grab a bite to eat and get out in this amazing resource we work to protect.

Why is this event important right now?

A lot of times, people connect offshore drilling and seismic testing and the negative impacts of those industries with the whales and the dolphins and the environment, which is very important to that, but it also has a huge impact on the future of our economy. A lot of times, there’s a disconnect there. I have spoken to some business owners, like a local tour guide operator and charter fishing company. Those are businesses we might coin as “working waterfronts”—people who are working on the water. Those people are the front lines. Not only will they see the environmental devastation first, but they will probably be asked to be responders in a lot of cases if something horrible happens. Third, it will totally transform, change, destroy, if you will, their jobs.

We’re in an exciting moment, I think, because the people we need to reach are listening. We can tell. We have our Senators Isakson and Perdue and our coastal representative Buddy Carter who have all acknowledged that this is a problem and the constituents don’t want it. I think that it’s very respectful that our Congressman Carter has separated his personal opinion. He is interested in energy independence and exploring offshore for oil and gas, but he also recognized that his constituents are not. They do not want it, and he has to separate his interests and be the voice of his constituents, and that’s really important. I’ll take it, right?

And Senator Isakson recently came out in a comment and said we should not be drilling or doing these activities if they harm tourism or recreation. He recognizes there’s a concern there.

So I think we’re seeing a switch happen. A lot of effort went into this. A lot of effort from citizens of the first district, from elected officials from across the state, from local mayors and councils all the way from Tybee to St. Mary’s. We have resolutions being passed, we have letters being sent in, and you can see the efforts are paying off. Now is not the time to go, “Oh, yay, that’s good!” Now we have to get it past the finish line. We need Representative Carter to stick with us. We need our Senators Isakson and Perdue to take a position against offshore drilling. And we need Governor Kemp to eventually make an official position.

Most elected officials are reasonable. They’re where they are because they worked at it and most of them, if they’re doing their job, are speaking on behalf of their constituents. That means it is our job, on the opposite end, to let them hear our voices. It’s so inspiring to see how much change is actually occurring here in Georgia.