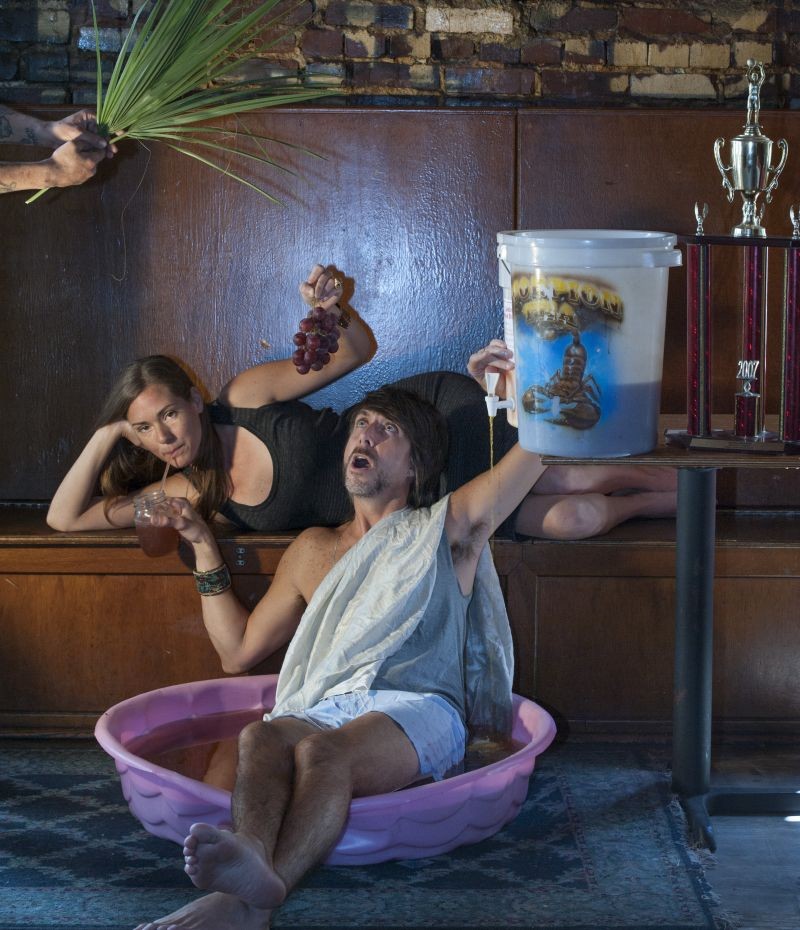 Geoff L. Johnson
The party god and goddess themselves, Wes and Heather in Hang Fire Bar

We’re at Hang Fire, bellied up to the bar that Daniel and partner Charlie Kerns built by hand, and Daniel is reminiscing about the labor that went into converting the old Whitaker Street Saloon strip club into a cozy, welcoming bar smack in between Congress and Broughton.

His nose crinkles recalling the fetid smell and stains of the carpet he ripped up to restore the place’s wooden floors.

He guffaws remembering a basement ghost that creeped on Kerns, who was sleeping in a hammock in the bathroom during the renovation.

There were seven bucks under the stage and a pair of clear acrylic stripper shoes in the basement, the latter of which now dangle off the original dancing pole behind the bar.

There were days and days of sanding, stripping (not the kind that requires aforementioned shoes), staining, and converting the well-worn dive into a new home.

Daniel, Kerns, and Flagle, their first employee, never intended for Hang Fire to be a music venue.

“It was just going to be this very casual hangout spot that people would feel comfortable in,” Daniel says.

But “the band thing” keeps coming up: a casual reference to the time in which Hang Fire went from a come-as-you-are hideaway to one of the most influential venues in Savannah.

Daniel and Flagle downplay their tiny stage’s contributions to the music scene, but if it weren’t for their down-for-whatever-as-long-as-you’ve-got-it-together mentality in regards to booking, it’s undeniable that Savannah’s scene wouldn’t be at its current pinnacle, that we wouldn’t have as diverse and strong a roster of locals as we do, or that bands would even consider making a stop off of I-95 in a swampy little college town.

Now, after long battles over noise complaints—an experience that has sparred intense community dialogue in regard to downtown development, the role of entertainment in the tourism district, gentrification, and the condo-ification of Broughton, for starters—Hang Fire as an entity is in a time of transition.

While Daniel and Flagle aren’t sure what the next step is, they’re ready to celebrate the spot’s time as a local monument and second home to folks from all walks of life.

The full transition into music venue coincided with the first Savannah Stopover. After building a stage specifically for the fest (at just a few inches above the ground, it provides some elevation while still creating an intimate setting), the busy weekend of diverse talent inspired Flagle to fully venture into the world of booking.

Hang Fire had hosted live music in the past—Superhorse played their grand opening party in 2006, and local indie and experimental bands like Sunglasses became semi-regulars around 2009, when a new wave of bands formed.

According to Flagle and Daniel, pre-Stopover booking was never at the level that Flagle decided to take it. 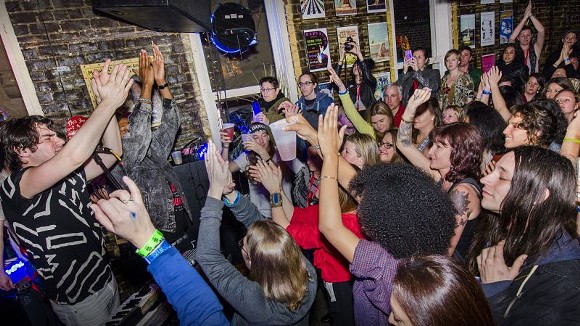 “Right after Stopover, stuff started happening upstairs,” Flagle says, referring to repeated noise complaints from neighbors. “We got a little start for nine months, then had to cut it off for a year and a half.”

“It was a phase we were going through,” Daniel says. “I was going to court, then it died down. We thought it’d be wise to stop for a little bit, and that kept extending depending on the court date, and we suffered for that for a year.”

They cautiously began booking again after a year, year-and-a-half period, though “it felt like 20 years,” Flagle says. Locals Hotplate and newcomers Wet Socks were the first bands to play as Hang Fire gingerly re-opened the stage.

“I didn’t know [Wet Socks’] Hunter or John at the time, I had just heard about them,” Flagle remembers. “The first time they played here is when it all started. We just really clicked, and they were the first people who started bringing in awesome bands from outside, and it grew from that.”

A lot of touring bands came to Hang Fire by word-of-mouth, as local bands began touring further and further around the country, spreading the good news of Savannah’s venues and great audiences.

“Fortunately for us, a lot of the locals, we’ve been their second home,” says Flagle. “We benefit a lot from that.”

“We try to do our part when they’re here,” Flagle explains. “We make sure everyone is happy and taken care of and gets to drink a little and has a place to stay and food. It’s always been a priority to make sure people are happy when they’re here, because they’re going to go back to their town and tell their band friends, ‘hey, we played this awesome venue in Savannah.’”

As for locals, Hang Fire has served as a first venue for many, due to Flagle and Daniel’s openness and attitude.

“I try to never limit by genre,” Flagle says. “I feel like that’s shooting yourself in the foot. I want to be working with people who have their shit together to a certain extent...but I would say I am very open-minded, and a lot of times, I feel it’s hard for people to break in. They get stuck at house shows, and I’m sure that’s really discouraging for them. Generally, it’s safer to wait until you know that the band has already established a name, but here, it’s okay. I know you, I think you probably know what you’re doing and would be good at this, want to give it a shot on Monday or Tuesday and see what goes from there?” 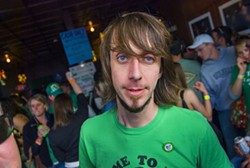 “I think we’ve given them a place to start out,” Daniel says. “And there are so many bands now...I remember at the time we opened, there was Kylesa, Black Tusk, Superhorse...it was sparse. The Americana thing hadn’t happened. Then gradually, over the last two, three years, there are so many bands, and so many really, really good bands.”

“I remember back in the day, people would say how much the music scene in Savannah sucked,” Flagle chimes in.

“When I hear that now, I say, ‘you don’t know what the fuck you’re talking about,” says Daniel.

It’s difficult to truly hear a band while taking drink orders behind the bar, but the duo know when a show’s going well.

“From our vantage point, we get to see everyone’s backs,” Flagle says. “The sweatier the backs are, the better the band is!”

She and Daniel both list January’s incredible Stopover-produced King Tuff/Ex Hex/Creepoid show as a favorite. Daniel loved the “weird buzz” of Perfect Pussy’s set in 2014, and fondly recalls the time his pals The Fourth Ward Afro-Klezmer Orchestra marched into the bar playing “Sweet Leaf” by Black Sabbath, tubas blaring.

There was that one time that Baby Baby was deep in their wild show when a car crashed through the window of neighboring Circa 1875. There’s the treasured closing ritual of “Sit Down Smoke,” in which staff would shirk their cleanup duties to sit at the front windows, share stories, smoke cigarettes, sip beers, and people-watch. 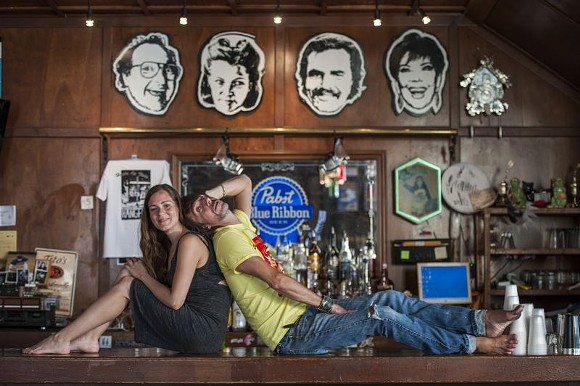 The walls alone are proof enough of the memories made in Hang Fire’s current space: a logo painted by R. Land in his signature zany-cartoon style hangs between windows; posters from old shows line every wall; paintings by Panhandle Slim and Zteven (he created the painted comic book-style beer and cocktail menus) pop off the brick; matted photos of Superhorse’s first gig elegantly grace the end of the bar.

Who can forget—and, let’s be honest, who among us has appeared on— that fake ID wall of shame in the front window? Whose band stickers have been proudly slapped on that back cooler?

But, really, in the end—do the surfaces that surround you when you enter Hang Fire dictate the core experience?

“It was like a weird miracle,” Flagle says. “We kind of made the space happen, and we provide the alcohol, but it takes on a life of its own.”

Whitaker Street will never be the same having been touched by Daniel and Flagle, once just co-workers at The Warehouse dreaming up their futures while counting receipts behind the bar.

But the notion of Hang Fire transcends its lovingly restored brick-and-mortar: it’s a culture created and nurtured by the wild and big-hearted Daniel and benevolent and sincere-spirited Flagle.

I think a certain poster in the bar says it best:

“Hang Fire...the bar that loves you just the way you are.”