Two decades on, the Enmarket Savannah Hockey Classic continues to bring that old college spirit to the ice

TWENTY YEARS AGO, the Savannah Sports Council first came up with the idea of bringing hockey to Savannah.

The twist was that their new hockey tournament would pit familiar college teams against each other — the perfect hangover cure for Southern college football fans facing eight long months until the next season’s hard-hitting action started.

A lot has changed in those two decades. For starters, a hockey fan isn’t an alien life form down South anymore.

“I was talking to a guy last week who moved to Savannah from Pittsburgh,” recalls Rob Wells, director of the Savannah Sports Council. “He’s excited for the Classic mostly because he’ll finally get a chance to see live hockey down here.”

Indeed, the influx to Savannah of new residents from around the country means the Hockey Classic doesn’t have to rely just on college football for its identity.

But the passion and rivalries of the fan bases do make for a spirited evening off the ice as well as on it.

“This is one of those events where people don’t really want to see a lot of change from year to year,” says Wells. “But we do have a few new twists to mark this 20th anniversary.”

The main addition comes Friday night, which will be “Nineties Night” throughout, to commemorate the Classic’s inaugural year of 1999.

“We’ll have ‘90s music sound bites throughout the night, and the first 250 fans through the door get a fanny pack,” says Wells. “And we’ll have lots of giveaways in the crowd.”

DJ-ing the weekend will be Shark, known to many from Savannah Bananas games, and popular local DJ Kotter of 106.1 FM. 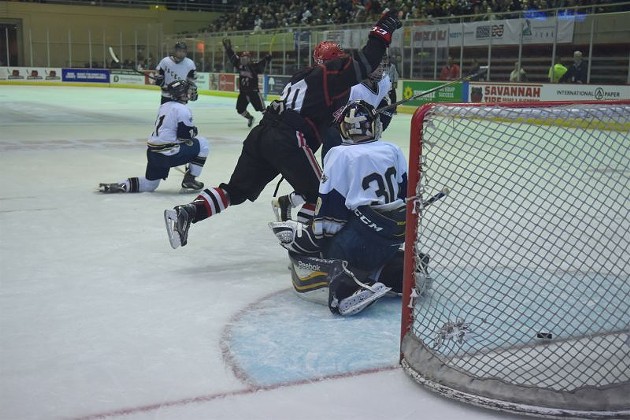 The origins of the Hockey Classic came from conversations with folks at the UGA hockey team, the Ice Dawgs. Before the current four-team tourney became a fixture, the University of Tennessee team participated for one year.

An attempt to add Thursday night to the tourney featured the University of South Carolina and The Citadel, but it was clear that what Savannah wants is a weekend of games featuring teams they are more familiar with from the gridiron. cs