OFFICIALLY, it may not be summer yet, but, as to be expected for Savannah, things are beginning to heat up. It’s only May, but now warm enough to hit the beach on Tybee, go out on the boat and hit the sandbar.

Some sticky days it seems the only way to truly cool off from the Savannah sun is seek out something cool and refreshing. Luckily, there’s a new kid on the block to help chill you down: Harper’s Desserts on the islands.

By no means are the owners of Harper’s new to the neighborhood; they have been running local favorite and classic Flying Fish Bar & Grill. 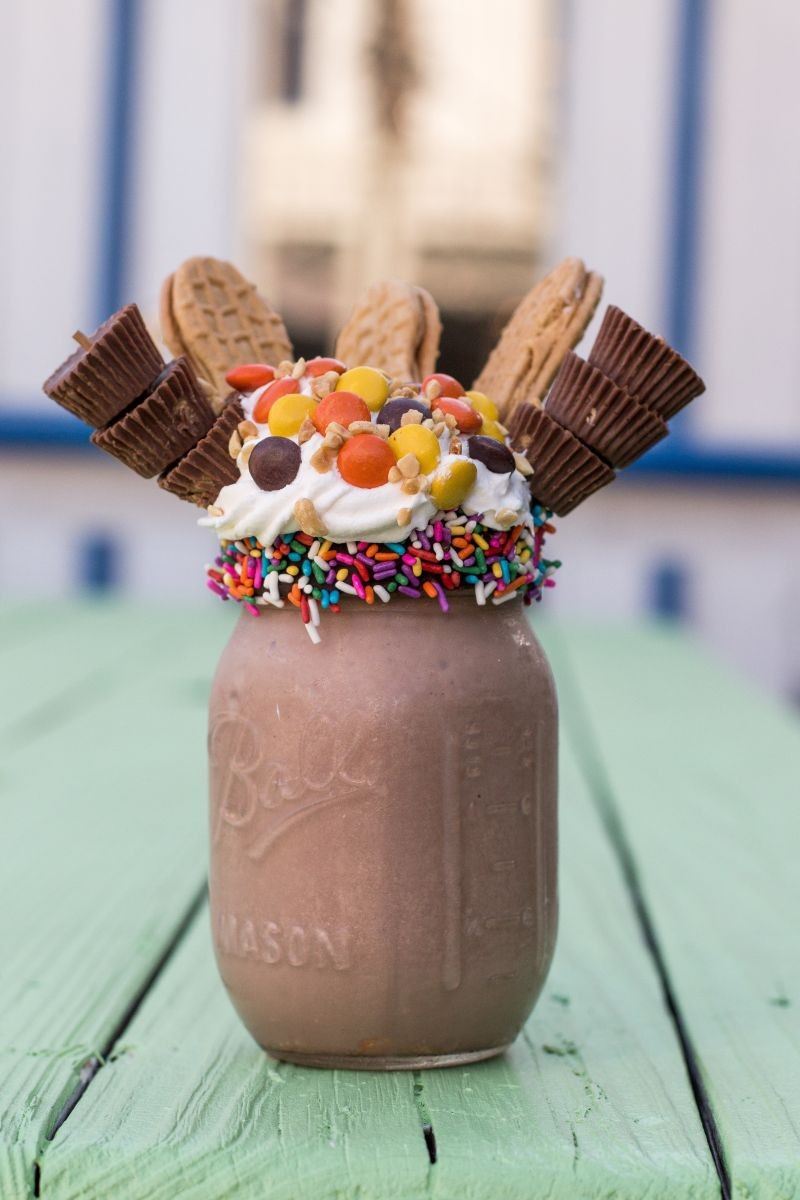 Co-owner Robin McMahon “has always been in charge of the Flying Fish dessert menu and was committed to offering unique desserts that were not mainstream,” Chris McMahon, marketing director of Flying Fish, tells me.

So when the space for Harper’s came available right next door to Flying Fish, the owners seized the opportunity. Owners Mike and Robin named to store after their three year old granddaughter, Harper, who I’m told by Chris often tells people about “her shop next door.”

On deck are 24 different flavors of cold. refreshing ice cream offered by Harper’s. The owners have included everything from classics like chocolate, cookies and cream, mint chocolate chip, and vanilla to more unique creations like Jolted Cow and Yellow Cake.

Of all the crazy flavors, most popular with the kids have been the “Cotton Candy and Superman flavor ice creams,” Chris says.

Generally, the most popular ice cream flavors have been the Jolted Cow and the Blueberry Cheesecake. The Jolted Cow is a java flavored ice cream base that comes swirled with sticky caramel and chewy soft brownie chunks, which cut through the bitter bite of the coffee. 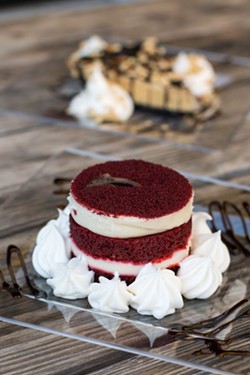 The coffee flavor is not too strong, and it coats the mouth with a the creamy sweet flavor of brew before your tongue finds a fudgy chunk of decadent brownie.

As for the Blueberry Cheesecake, the tangy and divine ice cream base is jammed full of the flavor of cheesecake and swirled with an alarming amount of blueberry.

The star of the show at Harper’s, and what definitely makes them unique, is their wide assortment of Monster Shakes. The term monster is almost an understatement.

These milkshakes are served in a large mason jar rimmed with anything from chocolate to breakfast cereal, then topped with things such as a moonpie, an entire slice of cheesecake, oreos, fruit, and so much more.

I was lucky to try (and unable to finish by myself due to the overwhelming portion) the Chocolate Peanut Butter Bust Monster Shake.  To create this bad boy, Harper’s blends their chocolate peanut butter ice cream with milk and Reese’s pieces.

The dreamy creation is poured into a jar rimmed with chocolate and topped with nutter butters, Reese’s candy, whipped cream, and crushed peanuts.

The milkshake fills your mouth with the creamy flavor of peanut butter, and as you continue to sip the thick drink chocolate hits your palate next.

Surprisingly enough, it was not until Harper’s featured their Shamrock Shake that the monster shakes took off. As you guessed, the popular dessert is only available during Savannah’s favorite holiday season.

Harper’s Desserts does not just offer ice cream, they also have a wide assortment cakes and pies. New to the dessert menu is a Red Velvet Cake, which “has quickly become one of our most popular desserts in just a few weeks,” Chris says. 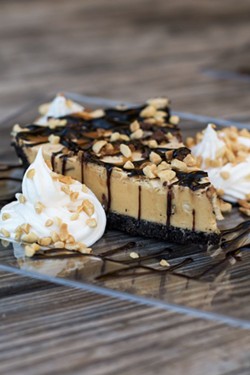 Instead of an entire cake or a slice, this speciality is individually portioned into your very own mini cake. Round airy layers of tasty red cake are smeared with luxurious satin cream cheese buttercream frosting.

Another beautiful dessert option is the Reese’s Pie — a creamy peanut butter center lays atop a crumbly chocolate crush for this slice. Creamy, crunchy, salty, sweet, this dessert has it all.

Also extremely popular as a dessert offered at Harper’s is the Mississippi Mud Pie, which is “Robin’s recipe,” explains Chris.

Again featuring a chocolate crust, instead this pie has a chocolate mousse-like filling and is topped with a velvety chocolate ganache.

Harper’s also offered the classic beach side pie, Key Lime, and hopes to feature “a peach version of the pie, which we think will be a great summer dessert,” boasts Chris.

True to form for a beach town sweet shop, shaved ice is featured on their menu.

Let’s not forget the coffee, which is brewed from a Nescafé Milano System. You can order anything from lattes to americanos.

Chris loves the coffee and, as he explains the system to me, he says they have “an espresso roast with a deep coffee flavor...it is great on its own or as a base” for something else.

The cherry on top of this sundae is: If you eat next door at Flying Fish, Harper’s will hand deliver anything you order right to your table.

If you have yet to have the chance to sample the-out-of-this-world flavors of Harper’s, I suggest you get down there now. Although the store opened in December 2017, you can expect a grand opening party coming very soon.