THE MEN who murdered Ahmaud Arbery can’t be charged in Georgia with a hate crime because there’s no state hate crime law.

Georgia is one of only four states without a hate crime law, the others being Arkansas, South Carolina, and Wyoming.

The deafening screams of many Georgians have given new life to HB 426, a hate crime bill that was passed by the Georgia House in 2019, but languished in the Senate without a hearing.

In 2000, a Georgia hate crime law was one vote shy of being shelved, but ultimately passed.  In 2004, the law was unanimously struck down by the Georgia Supreme Court on the basis of being broadly worded.

Because a consensus could not be reached about hate crimes based on sexual orientation, the law was intentionally left vague, and simply stated that in order to sentence a hate crime, it only needed to be proven that a victim or their property was targeted because of “bias or prejudice”. 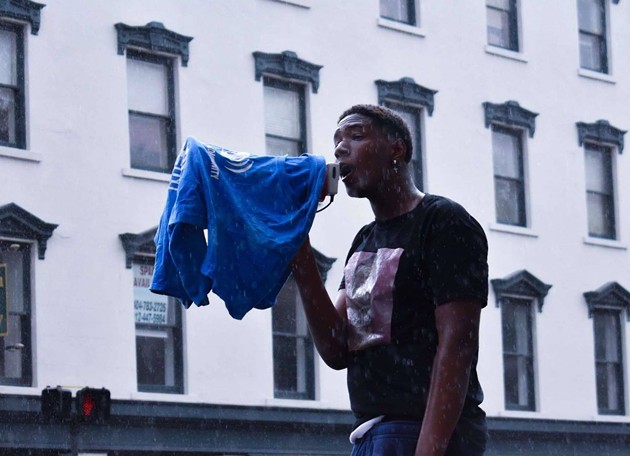 15 year-old Eunique Wilson takes to the street to protest almost daily. “I march to keep going, to make sure people know that we will not be put away again. That we will get justice."

In the Court’s opinion, Justice Carol Hunstein wrote, “A rabid sports fan convicted of uttering terroristic threats to a victim selected for wearing a competing team’s baseball cap; a campaign worker convicted of trespassing for defacing a political opponent’s yard signs...” could be used to invoke the hate crimes law.

The current version of the proposed hate crime bill provides for “enhancement of the penalty imposed, if the trier of fact determines beyond a reasonable doubt that the defendant intentionally selected any victim or group of victims or any property as the object of the offense because of the actual or perceived race, color, religion, national origin, sexual orientation, gender, mental disability, or physical disability of such victim or group of victims.”

Basically, if someone is convicted of a crime, and it can be proven that they committed the crime with bias and prejudice of one of the protected classifications, then the minimum sentencing can not be imposed, and higher sentencing guidelines will be required by law.

“Prosecutors are already looking at intent. This bill would raise the minimum sentencing that can be imposed; it is a sentencing enhancement,” says Scott Robichaux, a former prosecutor in Municipal Courts, State Courts, and Superior Court, now working at the Claiborne Firm doing Civil Rights litigation and Criminal Defense.

“The hate crime must be proven. It gives the prosecutor the opportunity to put the evidence of racial intent in front of the jury,” continues Robichaux.  “With hate crimes, just changing the minimum sentence is the smallest of changes the legislature could make.  When someone does something to a person because of their race or other protected class, oftentimes the victim is a stand-in for that race or protected class as a whole.”

“The bill is about as watered down as it can get, but I will take small steps versus no steps,” concludes Robichaux.

Rep. Bill Hitchens (R-161), who has 43 years of law enforcement experience, supports HB 426.  Hitchens was shaken by the video of the Ahmaud Arbery murder. “Obviously some people have hate in their heart, I don’t know how you cure it.  It looked to me that they were hunting animals, they chased him down and when he decided to fight, they shot him down.”

“It has to be more than the hate crime bill. We also need to eliminate stand-your-ground and citizen’s arrest,” says Rep. Craig Gordon (D-163).  “HB 426 is a great start and it sends the message that Georgia will not tolerate intolerance, but there is so much more that needs to be addressed.”

“It is time. Let’s get out of this backwoods hillbilly attitude. We are a progressive and innovative state,” says Rep. Ron Stephens (R-165) who is one of the co-sponsors of HB 426.  “This is about pure hatred for people, and we can’t have that in Georgia.  Hate leads to crime and that needs to be recognized. We need to give District Attorneys across the state an extra tool to prosecute appropriately.   I have a feeling that the Senate is going to come around.”

Now, Dr. Ben Watson holds that same seat, and while he supports the idea, he wants to read the changes that will be in the Senate version.  “The lieutenant governor has come out very strongly, I applaud him for it.”

The fact that Lt. Gov. Geoff Duncan, who serves as President of Georgia’s Senate, has come out strong makes it more likely that it will get a vote on the Senate floor.

Since the Senate will most certainly make changes to the bill, the House will have to vote on it again before it can become law.  HB 426 passed the house narrowly with only a 5 vote margin, leaving some to wonder if there will be enough legislators to pass it again in the Senate version.

One of the no votes in March 2019 was Savannah’s Rep. Jesse Petrea (R-166).  Last year Petrea said about the hate crime bill, “This law violates equal protection under the law by treating some victims as more worthy of protection than others.  Further, it punishes thoughts, not actions and injects identity politics into Georgia law.”

Eyes will be on Petrea to see if he changes his vote in light of the murder of Ahmaud Arbery.

Senator Lester Jackson (D-2) who has introduced hate crime legislation of his own for the past three years says, “It is time that we have a hate crime bill in Georgia.  We need to have a law on the books that is substantial and meaningful, and also one that reflects the values of Georgia.  I think that this year we are very close.”

“Georgia has changed in the past few weeks. There is a new understanding that hate crimes are real and exist,” explains Jackson.  “There is a fire brewing. People are sick and tired of being sick and tired.  The world will be watching Georgia.”

Senator Jackson, who has attended numerous rallies and marches with his sons over the past month, says that lawmakers who don’t hear the voices of change will “see the results on election day.”

What are Savannah voters saying about the hate crime bill?

“While the hate crime bill itself will not stop police and white supremacists from murdering black people in Georgia, it will hold those who commit hate crimes, against any person, accountable. I think too often people avoid labeling violent acts against any person as a ‘hate crime’ as they are unsure of the intentions behind these acts. It’s about time people acknowledge these reoccurring crimes against black, LGBQT+, Latinx, immigrant, Muslim, and any other minorities for what they are: hate crimes,” says Asli Shebe, community organizer.

“We need a hate crime law in Georgia. The judicial system cannot even begin to pretend like it will serve justice without a basic understanding of the reality so many marginalized people live in—and that includes being subject to hate crimes,” says Raine, a community organizer.

“Ask any trans person if they have been the victim of a hate crime and they’ll ask you what exactly you mean by that. I’ve been verbally harassed as long as I can remember by strangers, even when I didn’t ‘look’ trans,” says Raine.

“Criminal activity motivated by bias is distinct and different because the perpetrators bias based on race, religion, gender, gender identity, sexual orientation or disability is THE reason for the crime,” says Adam Solender, Executive Director of the Savannah Jewish Educational Alliance.

“A Hate Crimes law is necessary in Georgia because federal legislation has several gaps in victims’ legal recourse and hate crimes demand a priority response because of the unique emotional and psychological impact on the victim and their community. Georgia is late to the table in recognizing this much needed legislation.”