The summer concert season is officially upon us, and to kick things off, local music veteran Eric Britt of Hazel Virtue and the New American Hologram has a few exciting events up his sleeve.

Last year, Britt, with a little help from his friends, hosted Savannah’s first Homegrown Summer Jam at Victory North, an evening filled with music from some of the hostess city’s favorite folk and Americana artists.

All of that continues on Thurs., June 30 for the second installment and according to Britt, this year’s event will be bigger and better than the last.

“This year we’re going to of course try to make it bigger and better,” Britt said with excitement. “We did it last summer and the guys at Victory North have been really good about supporting the local music scene. So this year, we’re really going to run the gamut musically.”

In addition to Britt and his band the New American Hologram, joining the party this year will be Savannah-based country band Lyn Avenue, consisting of husband and wife duo CC Witt and Patrick Ellington. Aaron Zimmer, founding member of the bluegrass band City Hotel will also be joining the line-up as well as Matt Eckstine, who was voted Best Local Americana/Folk/Roots Band/Artist last month by Connect Savannah readers.

“Matt had a band called The Accomplices forever but he will be bringing the Eric Johns Trio with him which is this amazing jazz band,” Britt added. “And Aaron Zimmer and his band City Hotel, which are actually reuniting for this event, are like the top three if not the best bluegrass bands around here in my opinion, so people are really excited about that. Lyn Avenue is one of our local up and coming country bands so I think it’s going to be a really great collection of music this year.”

Closing out the evening will be Britt’s band the New American Hologram.

“The New American Hologram is going to close out the night with our own brand of Indie-Americana rock n’ roll music,” he said. “And at the end of our shows we always do an eclectic super jam, get everyone up on stage who performed that night. I already know what song it’s going to be…I can’t give out that information but I can promise it’ll be something that’ll bring the house down!”

That isn’t the only surprise that Britt has up his sleeve. His 90s alternative-rock band Hazel Virtue will guest appear for the last two songs of the night. Last year, after a 20 year hiatus, Hazel Virtue reunited, recorded and released a new album titled “Full Circle,” and performed several reunion shows around town. According to Britt, they had so much fun doing it that they wanted to reunite again and they are putting on not one, but three shows July 4 weekend.

“We had a good time last year catching up as friends and the music ended up being amazing,” Britt said. “So, we wanted to do it again. We’re guest appearing for the last two songs of the Homegrown Summer Jam just to say ‘guess what we’re playing in town the next three nights!’”’

On Fri, July 1 the official Hazel Virtue reunion mini-tour will kick off at 7 p.m. at Chamacos on Tybee, followed by another performance on July 2 at Service Brewing, and July 3 at Starland Yard. Britt says that in addition to original bassist Steve Pless and drummer Kevin Grey, Grammy nominated guitar player Andrew Sovine will be a part of the line-up as well as local musician Stan Ray.

“The thing that’s different about the Hazel Virtue show that we’re doing this time is we’re not using openers,” Britt explained. “We’re going to come out and play an acoustic set first, which is going to be my softer, more beautiful stuff, kinda open up for ourselves. And then the second half is going to be the balls-to-the-wall rock n’ roll music. We rehearsed our entire old catalog in addition to the Hazel songs that are on “Full Circle.”

For Britt, getting back together with his bandmates feels like a time warp and he’s hoping that will be the case for fans too.

“When I was 25 years old, Hazel Virtue was playing at music festivals and we had songs on the radio,” he said. “So to return at 50 and literally experience the same thing again with these guys is really frickin amazing! We had a really bright moment there for a number of years before we went different directions so it’s really awesome to be back together again with the addition of Andrew and Stan! This is going to be a great weekend and I’m really grateful for all of the local music support!” 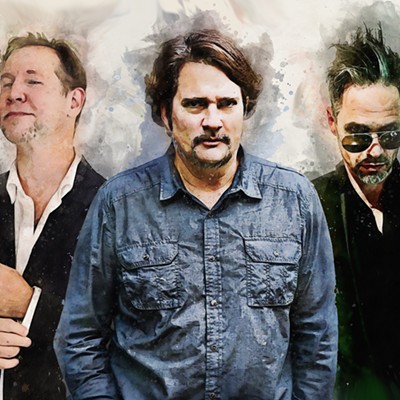