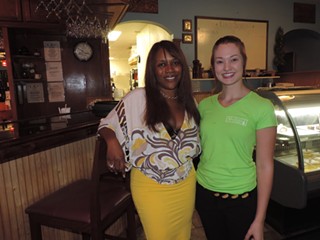 HERE I AM, your roving foodie reporter, giving you a heads up on an interesting place with a new owner tucked away among the strip malls of Airway Avenue in Pooler. I was out on my Walmart Walk one evening—large, well-lit parking lots and vigilant security makes for safe, night walking—and noticed this venue tucked away among the pet and hobby huts, hair salons and big-box stores.

Now, what, I wondered, was a Mediterranean place doing here in the wilds of Pooler? Was it any good? The reviews online suggested to me that people either hated it or loved it, no in-between.

The photos, however, tendered the opinion that a trip out there might not be so bad...so I drew up plans to make an evening of it, especially considering that they had a Hookah & Tapas Bar attached!

The original Mediterranean Tavern was opened 18 months ago by an experienced Greek entrepreneur Harry Kiriakides and his sister Helen Goniotakis. He’s a busy guy, though, with a lot going on, so he sold a partnership to Jacqueline Somesso, of Karma Entertainment fame, who took over six months ago, bringing in Chef Michael Walker, and his creative ways in the kitchen, to the forefront.

Harry and Helen still come in several times a week to oversee the authenticity of the Greek recipes, and the incredible desserts are handmade fresh daily. The dishes stem from family recipes dating back to the mid-19th century and their grandmother’s kitchen, combining Greek, Turkish and Mediterranean cuisine, and they like to see that the tradition continues.

Foodie talk around town suggested that since the new owner came on board, the place has gone through a positive change, and with the introduction of the new tapas menu and hookah bar, it was becoming quite the popular venue—Jackie tells me that Gulfstream folks seem to have made her place a favorite haunt, whether for lunch or dinner.

The charm of the place is two-fold: if you want good lamb kabobs, dolmadakia, a variety of hummus and other delicious Greek dishes, you’ll find them well-prepared and tasty (though, to be honest, a tad pricey for the portion sizes).

If you are seeking out some damn good chicken and seafood with a lightly seasoned, more recognizable slant (think Grilled Bourbon Chicken or creamy Garlic Shrimp), you will definitely find yourself a happy camper. Despite the name, they manage to cover both bases well.

The staff here seemed well-versed in the Greek dishes and could answer questions about ingredients, which I like, and we were attended to without fuss. Chef Michael came out to chat and gave me a brief history of the place.

The lamb chops here are well-seasoned, tender and perfectly grilled—yet at $18.95, I think at least four chops would be better—three hardly seemed sufficient to whet the appetite. The cheesy risotto was quite good, though I expected more of a vegetable flavor since it is listed as being made with zucchini and squash, and the grilled asparagus retained its delicate crunch nicely.

My hubby’s gyro looked wonderful and tasted good too, stuffed with plenty of meat—which Jackie assured me is sliced right off the roasted meat spit—and plenty of homemade tzatziki and fresh veggies.

There is a full bar with a good, wide variety of wines both domestic and imports, and fine selection of appetizers to choose from. I definitely recommend getting the platters that come with at least three choices, because you’ll want more than one, guaranteed. The hummus here is a little thicker than I’m used to, but it has a good flavor and spread on the pita with a dollop of tzatziki, it makes a heavenly treat.

The bakery alone is worth coming for a visit. In fact, you may be reminded, as I was, of the old Gottlieb’s confections which had to be stored in a refrigerated case because the cream was real and so was the custard filling! Gottlieb’s sold an exquisite Bavarian Cream pastry of phyllo, thick, real whipped cream and golden Bavarian custard—since they closed I have had to do without...but no more!

All the desserts here look incredible, but I have finally found that Bavarian Cream taste of heaven—here ,it is a large, square dessert pastry sprinkled lightly with powdered sugar and cinnamon, and a kissin’-cousin to the Gottlieb’s wonder. You will probably think you can’t finish it all, but it’s so light, so delicately flaky, yet stuffed with cream and custard, it proves to be the such a superbly decadent dessert you’ll want to conquer every bite!

Yes, culture and taste will make their way eventually to even an outpost like Pooler, and Mediterranean Tavern makes the long drive worth the time it takes to get there!