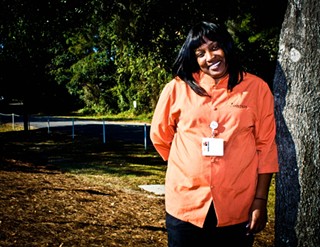 Jon Waits/jwaitsphoto@gmail.com
Veteran Sherri Harrison is part of a VA study that tracks the efficacy of treatments for post-traumatic stress disorder.

The nightmares started for Army veteran Sherri Harrison after she returned from her first tour of duty in Iraq in 2006. She started drinking to cope with what she'd witnessed in the dusty streets of Baghdad.

"I went through bottles of Grey Goose and Patron like they were water," says Harrison. "When I drank, I didn't think about what I saw, what I had to do."

A second-generation soldier who grew up on Army bases, Harrison thought she was prepared for a career in the military. But could not shake the horrors of combat.

"I've been blown up, shot at," she recounts. "I killed kids to keep myself from coming home in a box to my own kids."

She served a second tour in Iraq in 2008, surviving a rocket attack on her unit that killed several troops, including a close comrade. When she received orders that she was to deploy to Afghanistan, she declined, feeling the stress might kill her before the enemy did. She left the Army in 2009 and has struggled with civilian life ever since. Though she doesn't drink like she used to, she still copes with the aftermath of war.

"I have anger issues," admits Harrison, an otherwise bubbly mother of three in her early 30s. "I don't sleep. I get frustrated at every little thing. Going out in public freaks me out. I have no patience with my kids. I've lost jobs because of my temper."

She is just one of over 20 percent of veterans who report the chronic irritability, depression, explosive anger and other symptoms associated with post-traumatic stress disorder (PTSD). Half of them don't seek treatment, and of those that do, only half get "minimally adequate" care, according to veteransandptsd.com.

Suicide rates among soldiers coming home from Iraq and Afghanistan have soared, and some researchers suggest that is not untoward to categorize the PTSD epidemic as a public health crisis.

But Harrison and other vets are finding solid help in a new research study being conducted at the local Veterans Affairs Clinic. The bright, spacious facility on Montgomery Crossroads is one of four VA sites around the country where veterans with PTSD can receive proven treatment methods and a $300 compensation for their time. Savannah joins San Diego, Ann Arbor and Boston as a point where vets can help doctors develop future protocol for PTSD.

Funded by the Department of Defense, the PROGrESS study — short for Prolonged Exposure/Setraline Study — seeks the best treatment for PTSD by combining a type of talk therapy called Prolonged Exposure with sertraline, an anti-depressant best known by its brand name, Zoloft.

"Previous studies have proved that sertraline is the most effective medicine to treat PTSD," confirms Christi Oates, a registered nurse and the PROGrESS study coordinator. "It's already one of the most researched medications."

Prolonged Exposure (PE) is a form of cognitive behavioral therapy that requires patients to relive traumatic experiences in order to integrate them into the rest of the psyche. PE has shown to be tremendously useful in alleviating PTSD symptoms, especially with soldiers returning from Iraq and Afghanistan.

In the PROGrESS study, two thirds of the participating veterans receive one treatment or the other, and the last third receives both. There is no placebo; all participants get at least one "gold standard" remedy. Blood tests are taken to gauge the genetic components of efficacy.

"The theory of the research is that it will show that both treatments are effective, but the real question is whether administering them simultaneously is even more effective," explains Dr. Keith Cox, one of the study's lead psychologists.

Local veterans of Operation Iraqi Freedom, Operation Enduring Freedom and Operation New Dawn may be eligible to participate in the yearlong study. They will be required to make weekly visits for the first 12 weeks, monthly visits for the next 12 weeks and 2 visits over the last 24 weeks, all the while monitoring their thoughts, feelings and hopefully, relief.

Of the four other PROGrESS sites, Savannah study leads the participation with 35 vets, with a goal to enroll 114 veterans over the next four years.

"We're still only at fifty percent capacity, there's still plenty of room," enjoins Oates, who has been in nursing for over two decades and worked in PTSD research for six years.

"A veteran might wait six to eight weeks to get an appointment through the regular clinic, but if he or she signs up for the study, we can get them in right away."

Harrison is three months into the study and says that the PE therapy, along with breathing exercises and laying off the booze, have helped. She still doesn't like crowds, but she focuses on small trips out to the mall with her kids and enjoying their company.

But some days are more difficult, especially after the therapy sessions when she must relive the day her unit was hit with a rocket-propelled grenade and her best friend died in her arms. As she describes how she pulled another burning man from the wrecked Humvee only to watch him expire by the side of the road, her voice quavers.

"It's hard to talk about," sighs Harrison, who is currently holding down a position in the doctors' lounge at Memorial Hospital.

"I'll never be normal again. But I'm learning to deal with what happened because of the study. I know it wasn't my fault. Being in this program has helped me drastically."

Oates agrees that while it can be challenging for veterans to relive the trauma of war, it can also be liberating.

"A little treatment and some hard work you can see improvement for the rest of your life," counsels Oates.

"You don't have to experience this forever."

Paul Grassey is right on time