Running fast to catch up with fashion's punk rock cheerleader 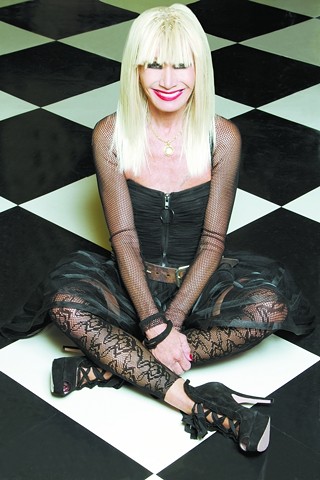 A Conversation with Fern Mallis and Betsey Johnson

Where: SCAD Museum of Art

At 70, Betsey Johnson doesn't know what it means to keep still. Known for her wacky designs, effervescent attitude and signature acrobatic moves, she has survived tumultuous times in the last decade, including breast cancer and the collapse of her business empire. However, with the help of designer Steve Madden and her beloved bubbly, the designer is as productive and bouyant as ever.

Talk to us about your relationship with Fern Mallis.

Betsey Johnson: I've known Fern since time began. Fern is my dearest friend in the industry and has always been totally supportive of me.  She's the reason I got my Council of Fashion Designers of America (CFDA) Timeless Talent award in 1999.

You and your brand seem to have bounced back from last year's financial turmoil like it never happened. What's your secret — brilliant strategy, sheer luck, copious amounts of Red Bull? All of the above?

Betsey Johnson: No Red Bull, just Champagne. I love to work and am happy to have my main man Stevie (Madden) backing me up.

What have been the biggest challenges of filming your Style Network reality show and launching a line of dresses with your daughter, Lulu?

Betsey Johnson: I'm not launching a line of dresses with Lulu; she's trying to launch her own thing. The challenge of the reality show the stress of having your life recorded for the world to see.

We've heard that Georgia's own B-52s have inspired your work. What other musicians have found their way into your designs?

How has being a breast cancer survivor influenced your work?

Betsey Johnson: I kept it a secret for the first six months until I completed treatment and then told the fashion world in 2000. I have been supporting and fundraising for breast cancer ever since.

I am being honored with the Susan G. Komen Survivor Award on May 14th.

Have you ever sustained a cartwheel-related injury?

Betsey Johnson: Knock on wood ... not yet!

What's your favorite piece of clothing, right this minute?

Do you have any preconceptions about Savannah?

Betsey Johnson: I hope to turn into Scarlett O'Hara.