Courtesy of AURA Fest
Rhythm of Fear, the headline act for Savannah's 2021 AURA Fest.
If you have ever enjoyed a heavy-metal show in Savannah, you likely have Tim Walls to thank for it. The promoter and now producer can easily be credited for creating the local heavy-metal scene, in no small part due to his popular AURA Fest that rose from the embers of grunge and heavy rock in 2000. Since then, he has held more than ten festivals in three cities. Now in 2021, with a global pandemic to spar with and most of Savannah locked away in their houses instead of attending concerts and live shows, Walls has taken the re-envisioned festival to the web, where on Saturday, Jan. 23, AURA Fest: Home Invasion will safely bring seven of the best metal and hardcore bands in the Southeast right to your preferred streaming device. It’s the true definition of a captive audience. “I was close to not doing anything, but as live music stopped, I really wanted to do something positive,” explained Walls. “I wanted to give local bands a platform.” Walls contends that it’s difficult to emulate the live festival experience via a series of pre-filmed concerts, but he and his production crew − video director/editor Jeremiah Stuard, Hidden Audio Studios recording engineer Chris “Scary” Adams, sound producer John Edwards, behind-the-scenes videographer Jim Reed, and photographer Valentin Sivyakov − pulled it off near-flawlessly. “Doing festivals is crazy because there is a lot of coordinating and logistical planning, so you have to have a good team that you trust, and I had that,” said Walls.
click to enlarge 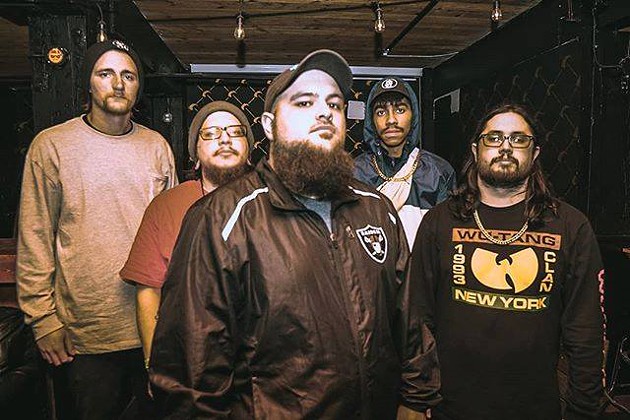 Courtesy of AURA Fest
Second Death, one of the bands performing in Savannah's 2021 AURA Fest.
Once Walls decided to adapt rather than surrender, he designed a streamed experience that accounted for necessary safety measures and protocols, social distancing and controlled capacities for the bands and crew at Southbound Brewing Company. All filmed in just one day, Walls and his ancillaries did everything imaginable to maintain an immersive experience. Multiple cameras show different vantage points, while live audio, a moving first-person-view type of camera, live photography, and even real-time stage management were deployed so that the shows felt anything but static. “It wasn’t easy,” recalls Stuard. “It was intense because you have one chance to get this thing captured, because we filmed everything live in one take.” One thing that Stuard and others found that can’t be replaced is the energy that a crowd brings to a live show. “The band stops playing and there is just no applause, that was the most jarring thing for me,” explained Stuard. Nevertheless, the crew persisted and rolled with the punches for more than ten hours, creating a COVID-proof experience for fans and a rare platform for local musicians who remain unsure of their futures in the scene.
click to enlarge

Courtesy of AURA Fest
Down Under, one of the bands performing in Savannah's 2021 AURA Fest.
After Stuard completes the production’s editing, AURA fest will look a little different, but will offer the usual assortment of up-and-coming heavy-metal rock bands. The full lineup includes Rhythm of Fear, Second Death, Depressor, Down Under, Circle Back, Hellcast, and The Holy Ghost Tabernacle Choir. Tickets to the 2021 AURA Fest: Home Invasion are on sale now through the event’s official website. General admission is $5, while VIP tickets cost $15 and include a full download of the festival video, an exclusive audio sampler of live tracks from the show, and a care package mailed with a limited-edition AURA Fest pin (first 25 tickets only), band stickers, a Southbound koozie, and drink recipes for your home bar. The 2021 AURA Fest: Home Invasion festival premieres on Jan. 23 at 5 p.m. The video will be available for three days after the premiere for anyone who buys a general-admission ticket. Visit aurafestsavannah.com or facebook.com/aurafestsavannah for more information.