provided by the artist
Durant working in her home studio. Detail from "After the Party” 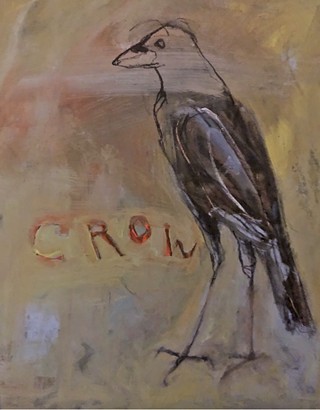 provided by the artist
"Crow"

Few pieces of art speak to me more than the passionate, gestural paintings of Helen Durant.

Now in her early 70’s, fragile and graceful as a bird, delicately boned and softly spoken, Durant’s genteel Southern accent and appearance belie the boldness and intensity she brings to her work.

It was a teacher at her Baltimore boarding school who initially recognized Durant’s gift for drawing and encouraged her to apply to art school.

However, her genteel Atlanta parents did not think it ‘proper’ for their southern daughter to go to New York by herself, and instead she enrolled at the University of Georgia “for a very short time.” She relates, “I don’t think I really got along with academia that well. I was a restless spirit. Instead, I came back to Atlanta and took lots of different classes from lots of different teachers.”

A trip to Europe exposed her to the works of the great masters and subsequently she attended The School of the Museum of Fine Arts in Boston to receive traditional training.

But again, she left, too young and immature to immerse herself completely in the life of an artist. Returning to Atlanta she “fell madly in love,” married, and started a family. “He was in law school at the University of Georgia and consequently I never saw him. I had one child and one child on the way. I drew and drew and drew the children from the time they were born and drew portraits of my husband studying. He was always studying. That was really my school.”

Durant credits her brother-in-law with suggesting the Museum School in Boston and with later encouraging her to attend the Cape School of Art in Provincetown, Massachusetts.

There she spent a formative summer studying with the famed Henry Hensche and broadening her world and understanding of color. Durant considered this time to be “an amazing experience. Finally, in my early forties, I learned about life and what it was to be a serious artist. The light bulb went off and I fell in love with painting.”

As Durant’s children grew up and her time became more her own, she found herself becoming a very different person from her lawyer husband, eventually leaving him to make her own living as an artist.

Represented by such prestigious Atlanta galleries as Pryor Fine Art and Lagerquist, she was primarily selling still life and figurative paintings.

Post-divorce, Durant eventually moved into a studio on Atlanta’s undeveloped west side at the old Murray Mill (now called the Goat Farm), a cotton gin mill built in 1889.

Craftsmen, furniture makers, glassblowers and artists utilized the space “down by the waterworks” surrounded by six acres and home to a herd of poorly tended goats. “One day Mother and I were there, and we heard what sounded like a baby crying. It was a newborn kid abandoned by its mama. We picked it up, named it Kudzu, and took him home. And that was the start of my love affair with goats.

The property’s owner, Robert, finally gave me five of them. He wasn’t taking care of them. He’d feed them leftover bagels from Einstein’s!”

Caring for the goats inspired an extended series of works: “I do tend to paint what surrounds me. I started to draw them. Then I started to paint them. I was so full of ideas then! I was taking pieces of wire and found objects and making three-dimensional representations. I sculpted them in wax and even had a few cast in bronze. A show of the goat paintings at Atlanta’s prestigious Fay Gold Gallery really put me on the map.”

Durant’s love of animals has always been evident and her concern for the environment and its wildlife has deepened into a passion for conservation. The plight of wolves and concern for the struggles they face as result of misconceptions has moved her to produce an entire body of work on the subject. She speaks of the “cruel, horrible and barbaric ways” in which wolves are trapped and killed. After seeing the wolf paintings, a Wyoming collector commissioned Durant to paint a massive canvas of elk, which subsequently led to her being picked up by the Diehl Gallery in Jackson, WY and “she was off and running.”

Today, she depicts deer, bear, crows, and horses in her characteristic style of expressive charcoal drawings overlaid with washes and drips of acrylic paint, patches of vibrant color, and often, an incorporated layered collage of torn paper. “I love to tear paper. The paper speaks. But drawing has always been my first love. There is something so exciting about its fluidity. If I want something delicate, I may start with pencil. But for strong pieces, I always use charcoal. You can get such rich lines with it. And of course, lines are what I love.”

Durant’s method is to go through great spurts of working, then lay the pieces aside and come back to them later.

“Unless I have a concrete idea or commission, I will start making marks on the canvas with a brush. Then something will speak to me. ‘Oh, that looks like clouds,’ for example. And then I’ll start to develop it. Then it will become too busy, and I’ll start painting stuff out. I’ll put it aside and then come back to it and see what it needs. I try very hard to abstract paint, but I will always see something. I keep working towards abstraction, but my first love is the drawing and making the lines.”

Drawing is her lifelong love affair - gesture and movement her primary focus. It comes as no surprise to learn she took modern dance classes for a decade; that freedom and surety of expression is reflected in every mark she makes.

A trip to New Mexico in 2003 and a safari to Kenya in 2008 stirred her spirit and added exciting new material from which to draw. She describes Africa as “life-changing. I did a show after that of all the animals.” And she will never sell the bold triptych of paintings of three life-sized Masai warriors done from her imagination. In rich reds, it hangs in her living room and is simply stunning to behold.

Drawing and painting every day, Durant currently works out of a room in her marsh front apartment on Wilmington Island. Moving here four years ago, she has found Savannah a tough art market to break into. Though represented locally by Roots Up Gallery and by Thomas Dean Fine Art in Atlanta, it is gallerist Mariam Diehl in Wyoming who provides the most sales and commissions.

Looking forward, Durant says, “I would say that I always want to experiment. I don’t have as many ideas as I used to but in drawing the lines and in tearing the paper, something will come to me. I’m interested in surface now, in layers. I carry on exploring new things, but if I have to continue to do commissions and have subject matter dictated by the galleries, God, I’m still lucky to do this.”

As mentioned, Helen’s work is available locally through Roots Up Gallery. Reach her via Instagram.com/helenydurant and at hdurant47@aol.com